The entire former Mistra Village complex has been declared a ‘special designated area’, doing away with a requirement over which the government had to issue an exemption to allow a major land transfer to go ahead.

Such an exemption is granted to bypass a Maltese law that only allows non-Maltese EU citizens to buy a second home on the island as long as they use it for residential purposes and do not rent it out.

The government had been pressured to issue a special permit enabling a Dubai sheikh to buy the former Mistra Village complex in Xemxija. The exemption has now been made possible through a legal notice published by the Finance Ministry.

The prime site, which has a total floor space the size of 19 football grounds, has been newly classified as being a ‘special designated area’. This means there are no restrictions on foreign investors wanting to acquire property there, unlike much of the rest of the islands.

Other sites with this status include Portomaso, in St Julian’s, Tigné Point, in Sliema and Fort Chambray, in Gozo. Built in the 1980s, the Mistra Village complex, which was run by the Corinthia Group, closed down in 2004 and has been abandoned ever since.

The land was sold to Gemxija Crown Ltd, owned by Kuwaiti and Maltese investors, with a 51 per cent share held by Jeffrey and Peter Montebello. A planning permit had been issued to redevelop the 14,000 square metre site into apartment blocks in 2013 but the project never materialised due to financial difficulties.

A renewed permit, issued in January this year, has been challenged and the appeal is still pending.

Last March, The Sunday Times of Malta reported that Finance Minister Edward Scicluna was under pressure to sign a special acquisition of immovable property (AIP) permit which would allow a member of Dubai’s ruling family to buy the project.

The name of the Dubai sheikh has never been disclosed for data protection reasons. At the time, the minister was advised against issuing such clearance on grounds that this would be in breach of the Immovable Property (Acquisition by non-residents) Act. 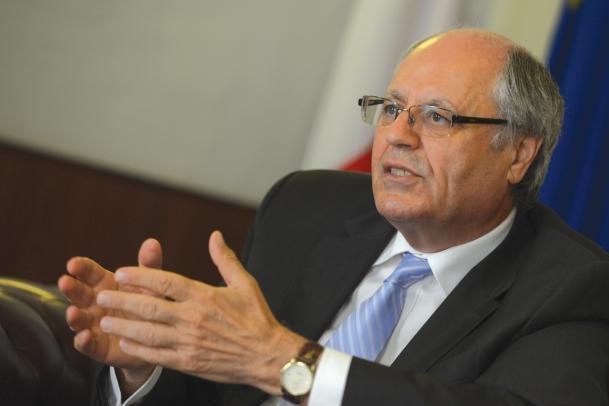 However, this impediment has been bypassed as the entire complex was declared a ‘special designated area’ through a legal notice issued on September 6.

They must also require an AIP permit from the Finance Ministry before signing a contract to buy property. This mechanism had been introduced prior to Malta’s accession to the EU in 2004 to protect Maltese citizens from foreign land and property speculators.

Furthermore, the rules for non-EU citizens, such as the Dubai sheikh, are even more stringent as they are only allowed to purchase a single property on the island and use it exclusively for personal residential purposes.

According to the permit issued last January, the site is to be transformed into a residential development of 744 units, shops, restaurants, offices, a spa and pool clubhouse along with a parking facility for 1,617 vehicles. However, a number of Xemxija residents and the St Paul’s Bay local council had appealed the decision, which is still pending before the Environment and Planning Review Tribunal.

The local council argued that planning policies, which had been enacted after the original permit was issued in 2013, should have been taken into consideration when deciding on the renewal.

It also held that the objection made by the Environment and Resources Authority had not been given enough weight and the development was “bulky” and not in line with the 2014 floor-to-area ratio policy regulating tall buildings.

Xemxija residents objected on similar grounds and they also insisted that the PA’s renewal decision was made when the original five-year permit had expired.