If film-makers were to be believed, the Azure Window had been towering majestically over Dwejra for hundreds of years, which several Maltese seem unwilling to dismiss.

However, the natural arch, a backdrop for the 1981 film Clash of the Titans and, more recently, a Game of Thrones episode, might not have come about until the second half of the 19th century.

Photographer Daniel Cilia spoke to Times of Malta about the several land and seascape paintings, drawings and etching of Malta during the Knights’ sojourn on the islands.

Most artists travelled to Dwejra and illustrated the then famous Fungus Rock – where fungus that grew only on the rock had reportedly medicinal powers. These included Jean Pierre-Laurent Houel (1776), Louis Ducros (1778), Louis Mazzara (1827), the Brockdorffs and the Busuttils. 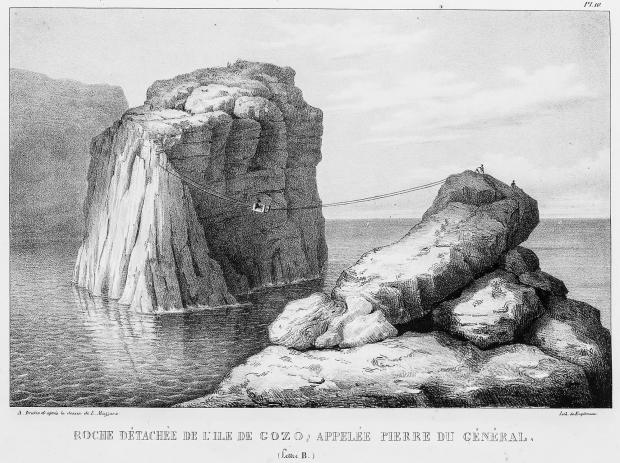 But the photographer believes that the most important clue that sheds light on the time that nature carved out the window lay in the diary of Edward Lear, who went to Dwejra on March 17, 1866.

In his entry he says: "Having drawn it [the Fungus Rock] I toiled up and up ­– but the coast scenery is not nearly as fine as that of Malta."

A photographic album of surgeon Michael Dundon, dated July 26, 1879, shows a couple of photos of the Azure Window by photographer Richard Ellis (at most printed by him since the stamp of the photographer is on the back of the print).

Mr Cilia believes that huge waves, similar to those which last Wednesday demolished the landmark, had eaten away the central part of the rock that jutted out of the cliff face in the years between 1866 and 1879.

Lear, and the other artists would have definitely been compelled to illustrate such a beautiful geological feature as that of the Azure Window once they were at Dwejra to paint the Fungus Rock, he added.

When contacted, Stanley Farrugia Randon, a medical doctor, author and a member of various cultural and historical associations including Din l-Art Ħelwa, described the phenomenon of the window as a natural one that was preceded and would be followed by similar ones.

The sea was “the best sculptor”, he noted, adding that nature was just doing its job.

"We lost a beautiful sight but we would be getting other beautiful ones in the future," he said. 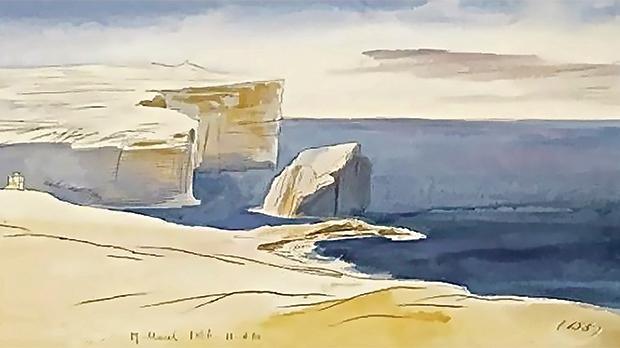