An advisory body will help translate a new national alcohol policy into law and action - such as reviewing penalties for drink-driving and introducing new responsibilities for alcohol-serving venues.

Richard Muscat, who heads the National Addictions Advisory Board, told the Times of Malta that the policy, launched on Friday, would see 23 action measures translated into law or new standards over the coming months.

“We have been working on drafting this policy to target problem areas in alcohol abuse. Now that it has been published, the next step is to start implementing the specific measures,” Prof. Muscat said, adding that in some cases, certain measures had already been introduced.

The Times of Malta this morning reported how the alcohol limit for motorcyclists and new drivers would be cut by 75 per cent, while all other motorists would only be allowed to consume almost half of what they can drink today.

The national alcohol policy, which was unveiled by Minister for the Family and Social Solidarity Michael Falzon, calls for the reduction of the blood alcohol content limit from 0.8g of alcohol per litre of blood to 0.5g for all drivers.

The new limit is the highest in Europe. On average, two drinks in the first hour raise a person’s BAC to 0.5g and one standard per hour subsequently will maintain that level.

Minister Falzon this morning said that this was just a small portion of the measures the policy seeks to introduce.

“We need a multi-disciplinary approach to tackling this problem. The policy seeks to target three main problem areas: alcohol use in children under the age of 17, alcohol abuse problems with adults, and drink driving. Each of these is a complex issue that needs to be addressed from a number of different angles,” he said.

The policy, which will remain in force for the next five years, will attempt to reduce and prevent the negative consequences of alcohol on people, their families and society.

Drink-driving is the indisputable cause of a considerable number of deaths, temporary and permanent disability, hospitalisation and other negative consequences on Maltese roads, Prof. Muscat said. 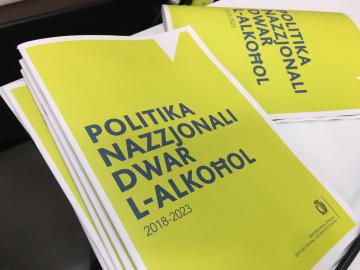 Among other things, the national alcohol policy calls for the enforcement of legislation to tangibly limit the sale, purchase, consumption and supply of alcoholic products to those aged under 17.

However, although all sellers of alcoholic products will be required to display a clear and prominent notice about the prohibition of sale to minors, they are being instructed to request that purchasers provide evidence of having reached full legal age “in case of doubt”.

There will be harsher penalties for sellers and distributors found guilty of breaking the law. Malta will also see increased owner and server liability, where those providing alcohol might be held responsible for consequences of inappropriate practices such as serving alcohol to underage people.

The new policy also calls for a discussion with the authorities to introduce stronger physical environment criteria when it comes to overcrowding, proper access and exit requirements to places of entertainment and proper ventilation and hygiene.