Stepping on the Azure Window could land you with a €1,500 fine.  But as these images show, laws mean little if there is nobody around to enforce them.

Video footage shot this morning shows dozens of people jaunting along the top of Dwejra's iconic sight, with not a care in the world.

"There must have been at least 40 people [on the Azure Window] at one point," said the Times of Malta reader who shot the footage.

"People were getting off the tour buses and straight up the hill, with no police in sight anywhere."

READ: Rough seas chip away at the Azure Window

The decision to ban people from walking along the top of the Azure Window came shortly after video emerged of a man dislodging a piece of rock as he leapt into the sea from the top of the site.

At the time, Environment Minister Jose Herrera had told the media that bollards would be installed to block access, with trespassers subject to a fine of up to €1,500.

Dr Herrera had also pledged that new legislation would be in place by summer, allowing officials to fine trespassers on the spot.

Timmy Gambin, who heads a Dwejra steering committee reconvened last year after a three-year hiatus, has said that he wants the site to be patrolled by rangers who can police the site and provide visitors with geological information about it.

The eyewitness who contacted Times of Malta said that they had called police to report the big group of people walking across the Azure Window.

It took police more than an hour to arrive on the scene, eyewitnesses said.

Another Dwejra visitor was just as frustrated at the sight, asking "is anyone actually interested in protecting this heritage before it is completely lost?" 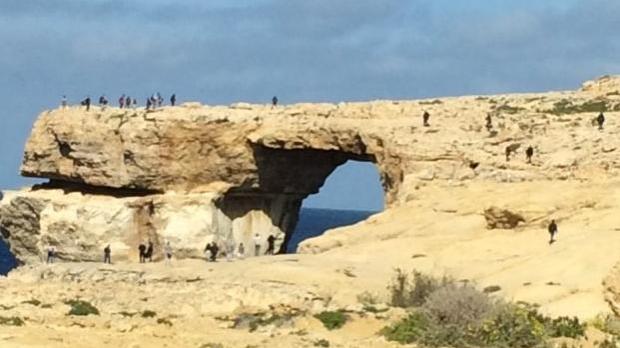 People walk across the iconic site without any bother.
The Azure Window is gradually being lost to the ravages of time.