Tony Zammit, the fisherman who found the two young men missing for more than two days, said he lowered them a sandwich and a bottle of water using a piece of string as they were starving and suffering from dehydration.

Speaking to the Times of Malta shortly after receiving treatment for minor injuries he sustained during the rescue, Mr Zammit said he could not believe how lucky the two men were to still be alive.

"The sea there is very rough. I have been fishing there for more than 25 years and I wouldn't jump in for a swim, I know how bad it can get,” he said. 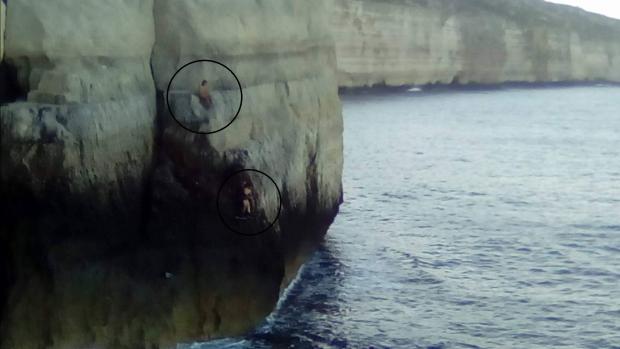 The two men (circled) before they were rescued.

The two young men, Nick Johnson, 21, and Mark Petric, 19, were taken to safety by members of the Armed Forces after Mr Zammit called the authorities to inform them he had found the missing persons.

“When I found the two boys, I didn't have any mobile phone reception, so I had to run away and call the AFM. They put me through to the helicopter pilot who asked me for directions to find these boys,” he said.

Mr Zammit explained that he had gone down to the area known as Blata tal-Melħ at around 4am this morning, nearly an hour's walk from his car, to his favourite fishing spot.

"When I got there I heard someone shouting but it was dark so I couldn't see anyone. When the sun rose I saw these two figures hanging from the cliffs. I couldn't believe my eyes," he said. 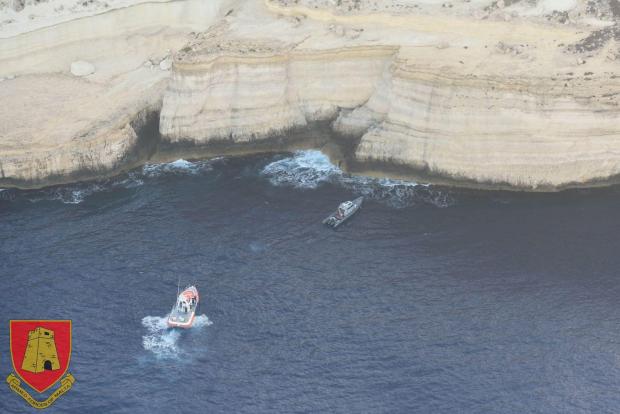 In a frenzy, Mr Zammit used a long piece of string to be able to give the boys his packed lunch, as they had been exposed to the hot sun and beating waves for more than 48 hours.

The two are currently receiving treatment for dehydration and exhaustion at Mater Dei Hospital.

Mr Zammit said he too had received treatment as he took a nasty tumble as he was running to high ground to be able to make the life-saving call to the authorities.

"I fell to the ground when I was going crazy trying to help these boys. My finger snapped and ended up pointing the wrong way, I broke it, but it's nothing compared to what could have happened to these poor boys, they don’t know how lucky they are,” he said.

Mr Johnson’s mother, Kerstin Panzavecchia, told the Times of Malta she was overcome with relief.

Sighing out a huff of both exhaustion and joy, she said the two young men were in good health and were being kept in the hospital overnight.

The two were suffering from exhaustion and dehydration and have been moved out of the Accident and Emergency department and into a ward.