Latvian gaming company Lucky Streak has been handed a lifetime ban from the SiGMA iGaming festival in Malta after a disturbing video emerged showing two people behaving inappropriately at their stand.

The video, sent to Times of Malta by a person at the festival, shows a man at the Lucky Streak booth stripping down to his underwear and gyrating provocatively as people gathered around to watch.

The man starts clapping and calling people to draw attention, then picks up another man, who appears to have dwarfism, and begins swinging him back and forth between his legs.

SiGMA organisers told Times of Malta that the two men in the video were business partners in Lucky Streak and that they had received a lifetime ban from the festival.

“We received the shocking footage showing these two business partners from Lucky Streak making a mockery on their stand,” they said.

“They took it too far and won’t be allowed to exhibit at SiGMA anymore. That’s a lifetime ban from us. The industry deserves better.”

However, people at the major iGaming expo said the two were still seen at the event on Thursday. The person who sent the video to Times of Malta described it as "not OK".

The organisers also confirmed that Lucky Streak was also behind the booth which earlier featured provocatively dressed pole dancers. That show drew the ire of Khalid Ali, CEO of the International Betting Integrity Association.

In a LinkedIn post, Ali said he felt that there was a “disconnect” between what is discussed at the conference and what happens on the exhibition floor.

“One of the panel discussions was “From player protection to advertising, is responsibility the new keyword for a successful long term gambling business”,” he said.

“Yet if you go on the exhibition floor you will find pole dancers dressed provocatively. I thought as an industry we had moved on from this but sadly it appears we haven’t.” 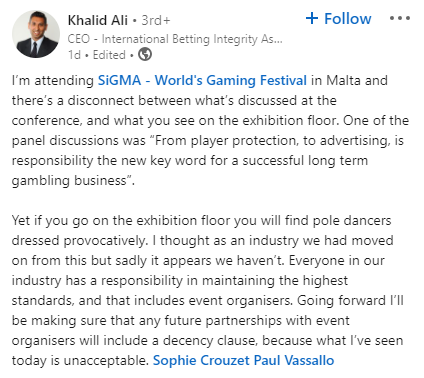 He added that every person in the industry should be held to the highest standards, including event organisers.

“Going forward I’ll be making sure that any future partnerships with event organisers will include a decency clause because what I’ve seen today is unacceptable.”

Responding to this thread, one of the SiGMA organisers said that the company had been warned “weeks ago” not to have skimpily dressed dancers in its booth.

“The client ignored all our warnings and we even threatened legal action yesterday,” the spokesman said.

“We will not tolerate any such initiatives at our conferences, irrespective of which continent they’re held at.”

This is the second time this edition of the gaming festival has found itself in hot water, after a 'SiGMA Night' party, featuring singer Akon, was shut down by police on Wednesday for breaching COVID-19 regulations.