Ultra-distance swimmer Neil Agius says he almost gave up early on his record-breaking attempt to swim from Linosa to Malta, but his team gave him the strength to keep going until the finish line.

Agius completed a swim of 125.75 km in 52 hours on Wednesday, in an attempt to break the record for the longest continuous, unassisted, current-neutral swim along a single-segment natural route in an ocean, sea or bay.

While the official distance which will be submitted on record is 125.75km, Neil actually swam close to 135 km after being blown off course by strong currents.

It was at the four-hour mark that Neil started experiencing a sharp pain in his foot, which he tried to swim through.

“When I spoke to the team before the challenge started, I told them ‘we are going to war’, and we did, we were at war with ourselves, our minds and our bodies,” he said.

Five hours later, faced with strong currents and persistent pain, Agius thought would have to abandon the swim.

“There was a point where I was doing a breaststroke and just crying my eyes out in the water because I felt like it was all over before we had even given ourselves a chance,” he said.

“I was so disappointed: all the work, preparations and sacrifices we made would have been for nothing.”

But as his medical team were able to patch him back up, providing him with anti-inflammatory medication, Neil got a second wind to keep going and lift his spirits.

“When they told me they could fix me up and that everything was looking good and to just keep swimming it completely flipped my perspective and gave me the motivation I needed for the next 40 hours or so.”

The next step for Agius to be declared a record holder is for the Marathon Swimmer’s Federation to officially certify the swim, a process that could take up to three months. Until then, Australian marathon swimmer Chloë McCardle, who set the record by swimming the Exuma Sound in the Bahamas, will remain the record holder.

“We’re going to send in a 30-page document of every half an hour, detailing everything,” Agius said.

“What I ate, how many times I had to relieve myself... the jellyfish bites. Everything has to be recorded, accompanied by photos taken every 30 minutes. The sea and air temperatures were also recorded and we will send everything to the Marathon Swimming Federation.” 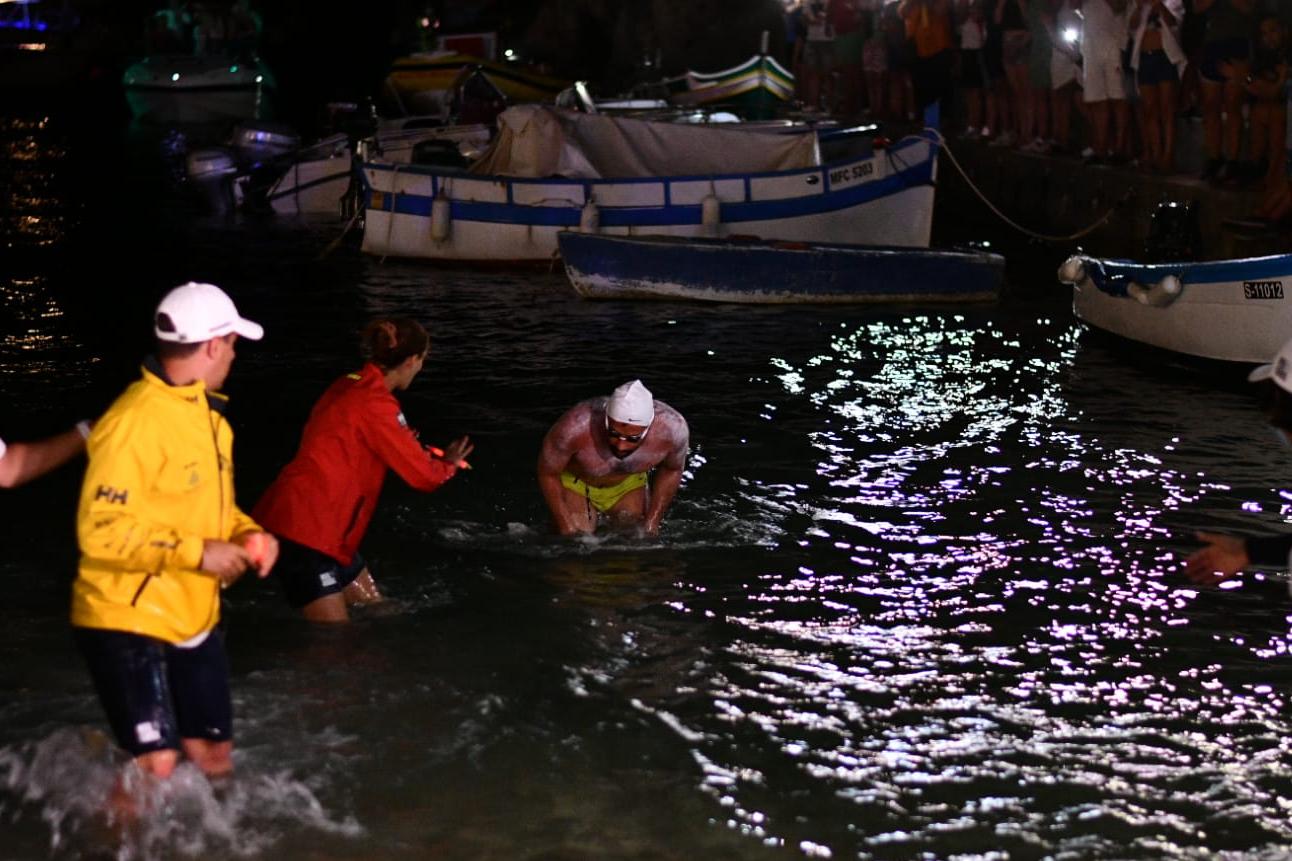 He made it. Neil Agius arrives home after a 52-hour swim. Photo: Jonathan Borg

Agius struggled with hallucinations as a result of sleep deprivation and total darkness at night.

“We had to use glow sticks to find our way around when the visibility out there was zero.

“I couldn't see who was on the boat, I couldn't even see my hand in front of me. It was also very cold, but felt re-energised when the sun came up.

"The hallucinations were quite strong, but I was prepared and my doctors kept reassuring me that there was nothing in front of me, urging me to just keep swimming, one hand in front of the other. That’s what we did and that’s how we got home.”

As for jellyfish stings, Neil says he was bitten a couple of times.

“I try to think of them giving me power rather than dragging me down,” he said.

Agius is expected to hit the water again with another swim in September. 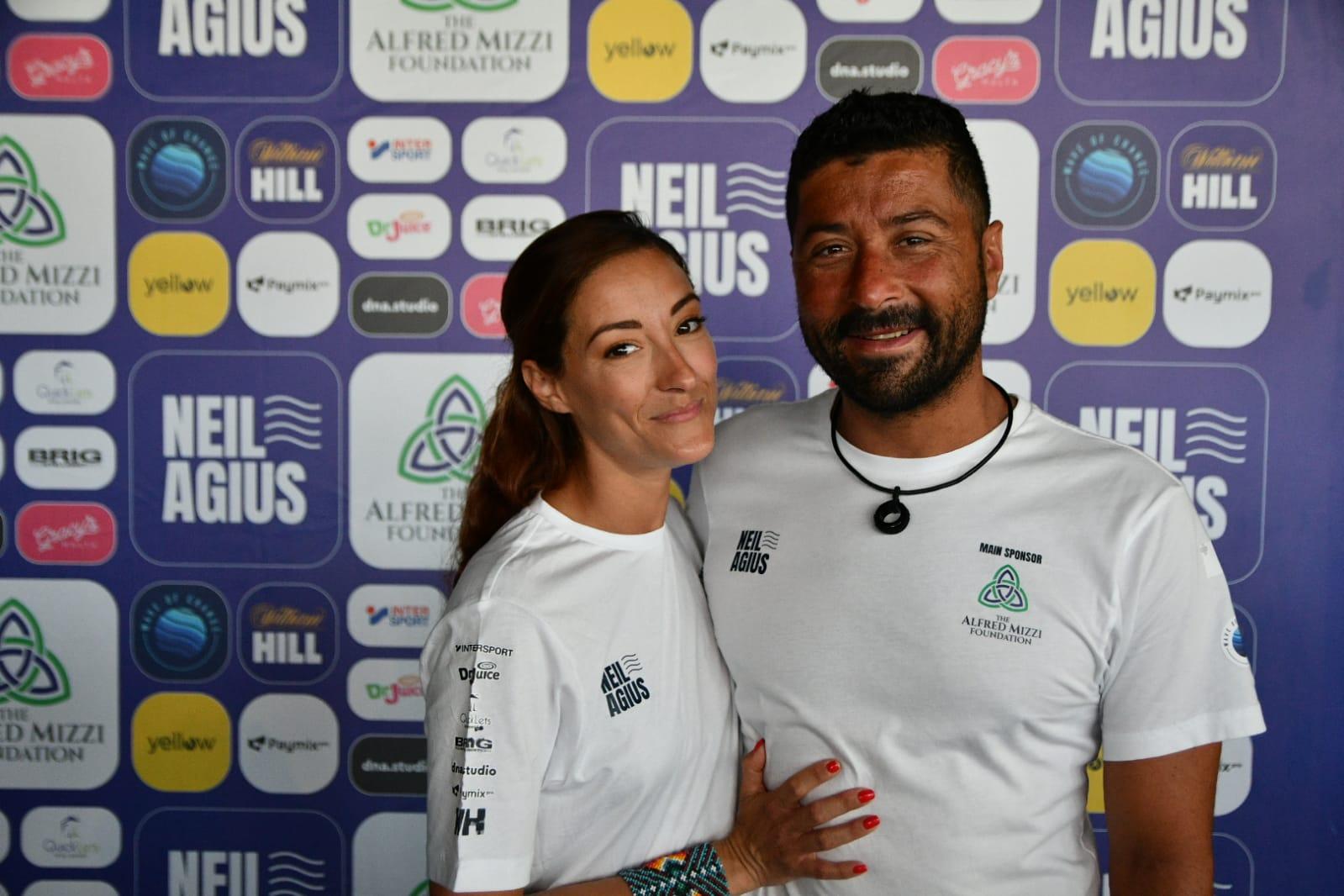 Meanwhile, his fiance Lara Vella, who watched over him every step of the way, said she proposed to him ahead of the swim in order to give Agius “something to look forward to”.

The couple will celebrate their tenth anniversary this month.

“I thought it would be a huge surprise and a big boost for him and that it could be something he could think about throughout the swim.

"I knew we wouldn't have time to discuss anything because I would propose and he would jump in, so I thought it would motivate him to get to the finish line so that we could plan the rest of our lives together.”

She takes her role in keeping Agius on track very seriously. They practice personal development together and she keeps him entertained with meaningful songs and mantras.

“I’m there to remind him about all the work we’ve done and how it can help him and take him to the finish line,” she said.

“We love South American culture and indigenous tribes. The songs we sing are very ancient prayers, specific to your needs, like strength and courage.”

“If he’s going through a difficult moment, weighed down by heavy thoughts, Neil can focus on a specific mantra to take his mind off."

Despite the toll of the journey, Vella is sure she will be by Agius' side the next time he gets into the water.

“Throughout the swim, I thought ‘never again’ but honestly the next time it happens I'm sure I will be there.”