A woman who was brutally raped for almost an hour as her two daughters listened on, has been waiting for 15 long months to tell the authorities her story.

Despite the presence of witnesses, and photos of the injuries, corroborated by a hospital report, Maria* cannot understand why she has not been asked by the investigating officer for her version of events.

The woman was raped at work in June 2020, metres away from her two terrified daughters, who spent nearly an hour listening to their mother’s agonising screams.

The man was peeled off her by two police officers who answered her call for help. Covered in bruises, with dislodged teeth and ripped hair, she was left incontinent for months.

The suspect was charged in June, a year later, but that is little reprieve for the woman, who has been left traumatised for 15 months.

The victim had her hair ripped.

“Why wasn’t the inspector interested in hearing from me about the attack? Had he at least come to the site, he would have seen the shape of my back imprinted in the uneven ground where I was raped,” she told Times of Malta.

Opening up for the first time, Maria said the investigating officer only spoke to her very briefly after the assault, telling her the case will go to court, unless she forgave him.

It was only later that she learnt – through her lawyer – that even if a victim forgave their perpetrator, the police were still duty bound to prosecute the aggressor.

The horrific assault has turned the woman into a “shadow of her former self”, and the lack of follow-up from the investigating officer made her feel even more worthless. Had it not been for her two daughters and her doting mother, the victim said she would no longer be alive.

‘I was scared I’d lose consciousness’

The assault took place in broad daylight soon after the 2020 semi-lockdown and just when two of Maria’s colleagues had left the workplace.

“I only knew this person by his first name. I was sexually abused, punched, had my hair ripped and was dragged around the room.

“I was aware my two children had run away in fear and hid. I didn’t call out to them as I was scared I will lose consciousness and he would rape them.”

At one point, Maria managed to get away from his grip, run towards another room and lock herself in.

“The first thing I thought was ‘I’m going to live.’ I called the police, however, when two officers turned up, I had to go through the same room he was in, and he assaulted me again. It was one of the officers who pulled him off me.”

“Had these real-life heroes not intervened, I would have been killed. However, I found zero support from the investigating officer. The inspector in charge of my case, only spoke to me briefly, for a couple of minutes, after the assault.

“He did not go to my workplace to see, with his own eyes, the blood-stained room. We deposited the attacker’s glasses and mobile phone at the police station ourselves.

“The police never collected the blood-stained clothes I wore that day, which I still have in my possession.”

Despite the shock, Maria plucked up the courage to take photos of her own injuries.

She says the inspector was not even aware she was meant to be taken to Mater Dei Hospital to file a report and was instead accompanied to a health centre. The centre referred her to Mater Dei, where she was informed she needed to be accompanied by a female officer, which took a further two hours to trace.

Had I known that I had to beg for an investigation, I would have been one of those raped people who don’t speak up

“At Mater Dei, I was on my own because of COVID mitigation measures. I could not even find somewhere to sit down. I had not eaten all day and I was in pain.

“When it was my turn to be seen to, the medical team was exceptionally good. Since you are examined just after you’ve been violated, the experience is traumatic.”

The doctor penning the sexual violence examination record told Maria that since she did not sustain any fractures, they would have to put down ‘minor injuries’ on the report. They added that she could stay on for a brain scan, but that meant spending more time away from her children.

“The attack took place at 10.30am. It was already 7.45pm. I thanked them but explained that I needed to be with my children. Looking back, I had wounds in my head that took months to heal, and to this day I have a dent in my jaw.”

A few months after the attack she found out the alleged perpetrator was roaming the streets freely, sparking fear he would track her down.

“The assault robbed me of my sense of security. I spent months in disbelief at what had just happened.

“I’d suddenly find myself wondering whether people around me will attack me. I could no longer let my daughter out of my sight, and when I finally allowed her to go to the grocery store, I kept an eye on her from the balcony. 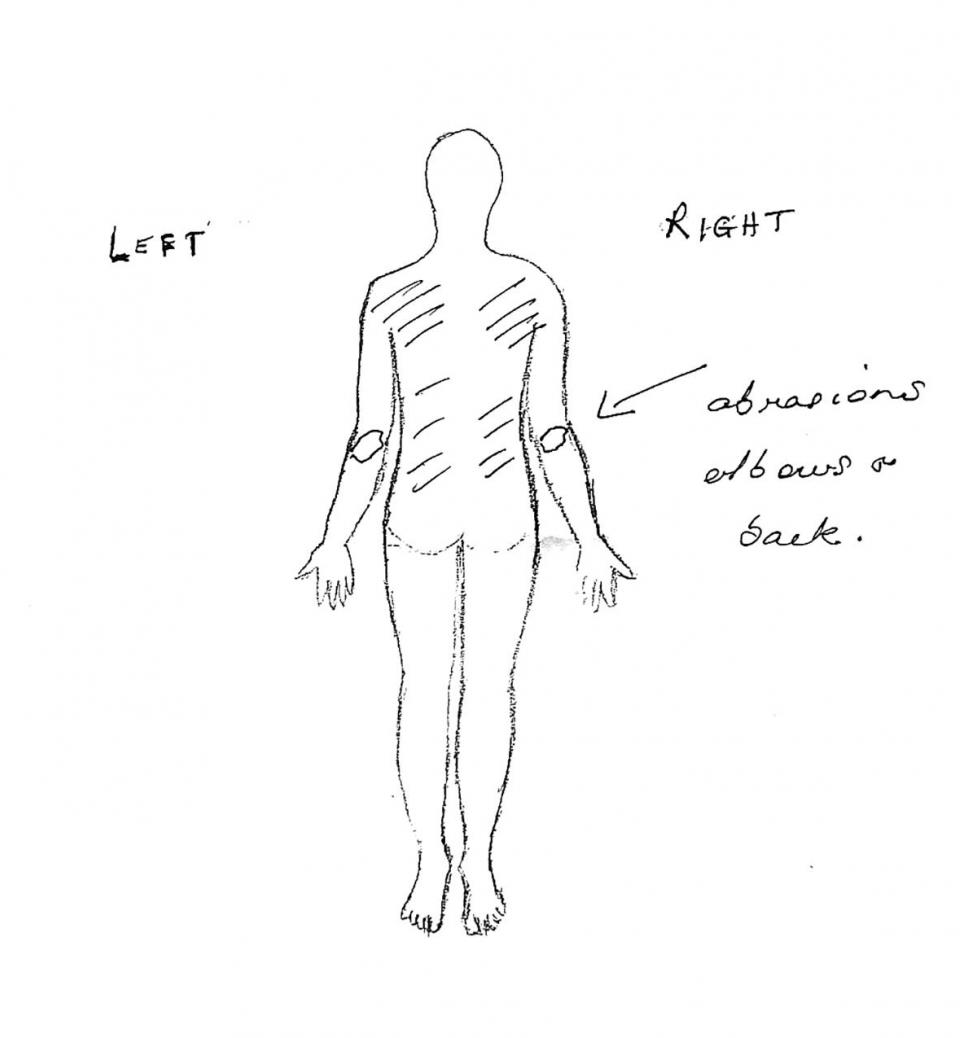 A sketch of the rape victim's injuries.

“I find it really hard to enter a room and would rather remain in the doorway. If I cannot stay in the doorway, I take a mental note of the exit routes. Sometimes, I fear people I have known for years. At other times, I am so confused that I am scared I would attack people.”

Following the assault, Maria was approached by the NGO Victim Support Malta, who supported her and her daughter.

However, she felt the police case remained at a standstill. Eight months after the assault, she wrote to the Police Commissioner and the Victim Support Unit got in touch with her the following day to let her know the case was proceeding.

When 14 months after the assault she was alerted about the police’s standards unit, she lodged a report about her grievances with the investigating officer. However, she was told there was not much that could be done, considering a year had already passed, and the case was now in court.

“I have photos, a hospital report and police witnesses. What else did they need? I cannot imagine what other victims, who have no proof to show, go through.

“I am truly hurt. I decided to give this interview and to take the witness stand to seek some sort of justice and closure over the matter.

“Had I known that I had to beg for an investigation, I would not have lodged any reports. I would have gone home with my children and mother, who love me, and tried to heal on my own. I would have been one of those raped people who don’t speak up.”

*Name has been changed

Maria’s sense of worthlessness and frustration over the investigation system is mirrored by several abuse victims supported by the Women’s Rights Foundation.

She told Times of Malta the foundation has been calling on the justice system to prioritise victims and not treat them as a side note of the case.

“Several are not offered support and kept abreast of the investigation of their case. Those who do file a report often find that the case drags on for a long time, and they are approached to recount the assault in court months later, reopening the wounds. In this manner, the same people who should be protecting them are re-victimising the victims.”

What is the police protocol?

Between January 2017 and August this year, the police received 600 reports of sexual offences, 104 of which were classified as rape cases.

A spokesperson told Times of Malta that while there are established protocols for reports lodged with the police, each case had “different elements which make it unique, thus the need to prioritise according to merit”.

The Vice Squad, he added, is informed of rape reports, “to take cognisance of the elements of the case and determine to what extent further assistance from this squad’s end is necessary in the ensuing investigation carried out by the divisional police”.

The Victim Support Unit should also be informed as soon as the report is lodged so that it can provide psychological and emotional support to the alleged victim.

The spokesperson said the unit acts as an intermediary between the investigative team and other governmental departments or NGOs that can provide further specialised assistance.

An alleged rape victim is also to be “invariably escorted” to Mater Dei Hospital by same-sex members of the force, where the victim is seen to by the Sexual Assault Response Team.

“All throughout this process, the alleged victim is to be kept informed in plain and simple terms of what is happening and why by the investigating officer.

“This right of keeping any victim of crime informed with any significant developments in the ensuing investigations is also enshrined in the Victims of Crime Act. The Malta Police Force obligations in this respect cease to exist only once criminal proceedings against the perpetrator become res judicata,” the spokesperson said when asked about police protocol for cases of rape.

He added that police investigations were dynamic and continuous review and adjustment exercises are undertaken, intended to “ameliorate outcomes”.

If you have suffered sexual assault, whether recently or not, you can get in touch with Victim Support Malta on 2122 8333 or on info@victimsupport.org.mt.

In a statement on Sunday evening, the Malta Women's Lobby denounced the indifference shown by the police following the incident.

While it thanked the members of the force who assisted the victim during the attack, it said police inaction after such a lengthy period is unacceptable and could foster a sense of impunity on perpetrators and aggressors.

Action by the police and help services, it said, should always be victim-centred to protect the victim.