Adrian Delia said he has never offered to step down or even suspend himself as leader of the Nationalist Party because his "personal matters" were not damaging or disrupting his political role.

Dr Delia was the guest on Times Talk on Monday after an early morning warning where he said he was prepared to go on the warpath against his opponents within his own party. Battling internal factions, the embattled PN leader is currently also facing claims of domestic abuse by his wife.

Read: Adrian Delia goes on the warpath against party 'traitors'

Asked he if ever offered his resignation as party leader in the wake of the domestic abuse claims, he was firm: “No, never, and I don't intend doing so,” saying he did not even contemplate suspending himself pending the outcome of the court case.

“A personal separation has nothing to do with the ability of leading a party… Mention one instance where I have failed to do my job, failed to turn up, or where I wasn't focused or in control."

He said the fact his personal phone messages were being disseminated by PN exponents meant that, if anything, he was a victim not the perpetrator. 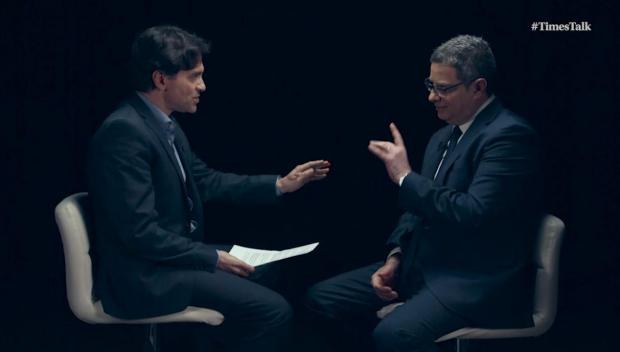 Adrian Delia was in combative mode.

While agreeing with the fact that no leader should be bigger than his party, Dr Delia insisted that the claims enveloping his private life was not sinking his party.

“I don’t think so. We’re not talking about allegations in the public realm, like corruption, we’re talking about personal matters here.”

When asked if he felt he enjoyed the support of the majority of MPs in his party, he said he had overwhelming support from people beyond the party walls who understood his predicament because after all he was elected "by the people for the people".

Read: Resignation by Adrian Delia? Then what?

"I can assure you that the overwhelming support that I have received from them isn't only comforting but convince me I’m on the right track."

He says the party has no time to waste ahead of the May European Parliament elections and this is why he sent out a combative message to his critics on Monday.

Asked to identify the traitors he cited in his message he replied: “I’m referring to all those who think they are attacking a corrupt government by attacking me, my party or the Opposition. I’m referring to those who feel comfortable abstaining or standing on the fence who say the May elections mean nothing.”

In a statement, the group said: "Asking Occupy Justice to take a stand on abortion is like asking the PN to take a official stand on whether Milan is better than Juventus...  This is so unbelievably dishonest, that in and of itself, it should render him unfit for office. We have no opinion on abortion or legalisation of drugs. We have never discussed it – privately or publicly – we never will discuss it and we have no national agenda plans."

Occupy Justice said it wanted to remind the PN leader that it only stood for good jovernance and justice for Daphne Caruana Galizia.