Keith Schembri had offered to resign when “lies emerged that he was dying”, Prime Minister Joseph Muscat said this morning.

“A serious issue was turned into a terminal one and it left a devastating effect on his wife, children and entire family. A person at that stage needs support, not to be discarded,” Dr Muscat said as he expounded on why he had rebuffed his chief of staff’s offer.

In an email sent yesterday in a reaction to a Sunday Times of Malta editorial, Mr Schembri wrote: "Joseph Muscat isn’t just my boss - he is my best friend. And I have offered him my resignation on several occasions – not because I am guilty of what our opponents say, but because I do not want to be a distraction from the incredible job he is doing. He has always urged me to stay, that what we are doing for the country is important."

READ: Muscat will have to quit 'when Schembri is taken to court', says Busuttil

Dr Muscat said the fact that the two men were friends “is no secret” but that “friendship has nothing to do with this. If he is subjected to a criminal investigation he will resign. I took a decision and paid the political price for it. Now people will judge me,” the Prime Minister said.

Answering journalists’ questions, the Prime Minister said his rival Simon Busuttil “has a person related to drug trafficking” in his inner circle, adding “and I’m not talking about Beppe Fenech Adami.” He did not clarify further, save to again say Dr Fenech Adami was also being investigated by the FIAU for links to drug trafficking-related money-laundering.

Dr Muscat said he welcomed news by the Malta Gaming Authority that gaming licence applications were up by 79 per cent, and said that more good news was in the pipeline.

“Discussions with three world-leading gaming companies are nearing completion, and one of these has already filed an application to relocate to Malta,” he said,  saying the company was “a household name.” 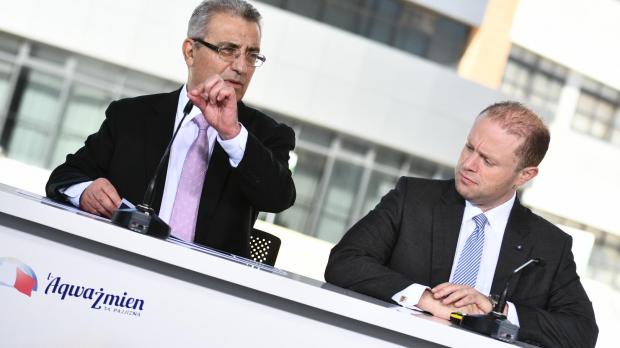 Dr Muscat was speaking a press conference at the Mcast campus in Paola to highlight some of the Labour Party’s proposals for the tertiary education sector.

He said the PL’s proposal to create a €1 million research fund for University academics to tap would help spur the University to new heights, and added that talks were currently underway with an unnamed foreign university to allow veterinary students to carry out the first three years of their studies here in Malta.

Dr Muscat said the PL wanted to further solidify progress in encouraging more work placements for students and would ensure apprentices were paid at least the minimum wage, with their salaries made tax-deductible to ensure employers were not burdened.

The PL was also pledging to give students an €850 grant to go overseas and study a third language, Dr Muscat said, with the Prime Minister saying he envisaged this proposal as a sort of “appetiser” for those interested in joining a student exchange programme such as Erasmus.