Speaking from the balcony of party headquarters he said the Labour majority had grown to 48,000 votes so far, making it a bigger victory than the general election.

The PL would later revise that figure upwards, to 51,500, as more votes were counted.

With his wife Michelle and his two young daughter’s by his side, Dr Muscat said that this was a moment he and his family would cherish all their lives.

The result, he said, was down to party unity. It also imposed a heavy responsibility and he would continue to ensure that the government remained rooted to the ground. The government, he promised, would not be arrogant.

He said that while he appreciated the backing of his supporters, he was appealing for national unity. “Let us again extend our hand of friendship, this is not the movement of division but of unity,” he said.

In a reference to outgoing Nationalist MEPs, he said the electorate had declared it did not want anyone to go overseas to work against the country. 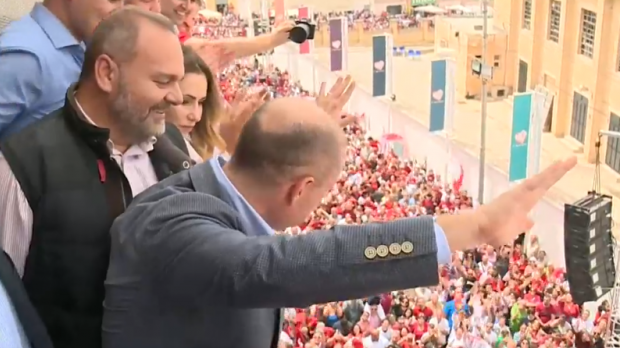