The image of a helpless virgin being kidnapped by ruthless pirates is a popular one in Maltese lore, creating the impression of a nation at the mercy of marauders.

Yet, this scenario is far from representing historical truth. In reality, Malta often gave as good as it got, with Maltese furbani – corsairs – terrorising the seas.

And, as the world celebrates Talk Like a Pirate Day, a series of guided tours around Valletta highlight precisely this somewhat less than wholesome aspect of Malta’s past.

Organised by The Real Malta Tours, Il-Furban Malti sessions focus on acquainting attendees with the salacious (and historically accurate) anecdotes. The tour guide, Xandru Galea, shows up in full pirate garb. The showmanship, however, hides a genuine knowledge of the topic.

“This is not Pirates of the Caribbean. The tour is based on texts and evidence that the 16th and 17th century Maltese folk were not, in fact, as helpless as we were led to believe,” Mr Galea says.

This sentiment is echoed by Giacomo Muscat, one of the founders of il-Furban Malti.

“Historical material has shown us that corsairing was one of the biggest industries on the island in those days. We use the word ‘corsair’, as opposed to ‘pirate’, because these corsairs were fully licensed by the state,” Mr Muscat explains.

His interest in this particular topic was piqued when, while researching Napoleon’s stay in Elba, he came across a particular statement in a text book referring to how Napoleon was worried about “being abducted by Maltese pirates”.

This is not Pirates of the Caribbean

This came as a surprise to Mr Muscat, who always believed that it was the Maltese who were the victims.

“It was frustrating to see that this aspect of our heritage is not really highlighted in our history. We always come across as an oppressed people when, in reality, many historical texts prove otherwise,” he said.

“We sinned as much as we were sinned against.” 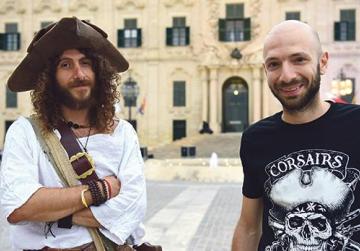 And so, Il-Furban Malti was came to life in an effort to rectify this imbalance.

These furbani, Mr Muscat continues, were also looked up to as naval experts, often involved in matters of security around the Mediterranean region.

“The trade, despite being risky, offered such high rewards that even those who could not themselves become corsairs would invest in it. They would then be accorded their share of the loot upon return,” Mr Galea said.

The exploits of many a Maltese corsair – such as Michele da Malta – were notable enough to earn them a place in history books.

“Historian Joseph Muscat’s The Maltese Galley quotes a Turkish captain as saying ‘there was a devil in every Maltese soldier’,” Mr Muscat said.

“Senglea sailor Juan Azzopardo went on to found the Argentinian navy and there are vessels and streets named after him in Argentina.

Charles Dalli’s Malta: The Mediaeval Millennium describes a number of corsairing expeditions masterminded by Maltese sailors; and Venice and Hospitaller Malta, by Victor Mallia Milanes, refers to the fact that the Maltese were ingenious, professional corsairs. The list goes on.”

The tour, which lasts some two hours and kicks off right opposite Auberge de Castille, tells those present about how important it was for a corsair to ensure that he was properly licensed and that he followed regulations.

The message was clear: you may be a cool pirate and all, but you still have to answer to the Grandmaster. 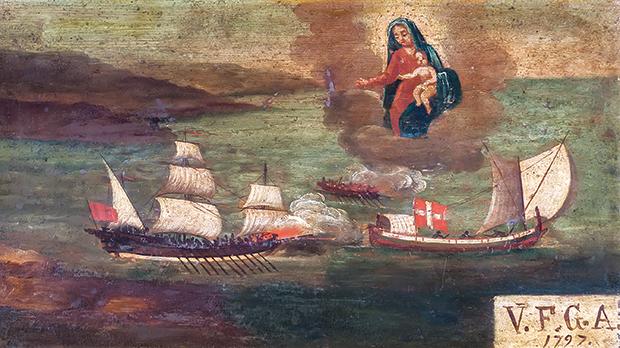 Some artefacts from the day of the corsairs, including paintings, still survive and are on show at the Maritime Museum in Vittoriosa. Photos: Daniel Cilia

Kings of the high seas?

How much of a pirating nation was Malta back in the days of the Knights?

Turns out that tales of looting and pillaging on the seas surrounding the island and beyond are not the result of flights of fancy, but pretty historical data. And, what’s more, Malta Maritime Museum curator and author of In the Name of the Prince: Maltese Corsairs 1760-1798, Liam Gauci tells us that it was all perfectly legal. 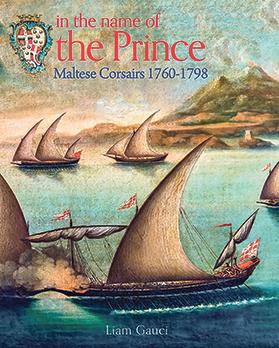 “Malta had about 1,000 years of corsairing, with the most concentrated activity taking place during the time of the Knights,” he said.

“We refer to it as corsairing precisely because it was a very well-regulated profession under Maltese law. Pirating is the illegal version.”

Not only did Malta run a thriving trade – we were also extremely good at it, with the island being the envy of other Mediterranean countries. Malta’s excellent geographical position and harbour helped, but the rest was down to enterprise.

“Basically, Malta had good, fast, small ships that could sail out, capture and bring back things. And, by things, I mean that 50 per cent was human merchandise; kidnapped slaves,” the curator explains.

“The other 50 per cent were goods that were deemed as expensive as gold, back then. Luxury items like saffron, pepper, cinnamon, coffee and cardamom were very much craved my Europe, so we filled a gap in the market, so to speak.”

Corsairs were given a licence to kill, steal and attack anything that belonged to enemies of Malta – and it soon became a case of our reputation preceding us. So much so, that many records show people preferring to surrender, rather than have to battle the Maltese corsairs. In one rather noteworthy instance, a Turkish captain preferred to set fire to his ship, and jump off.

“We had the best dockyard in the region and the best technology. If you wanted warfare, the best was all here, on the island. This made Malta a very cosmopolitan region, with foreigners settling here in order to get a corsair’s licenc­­e. You can still find their legacy,” Mr Gauci said.

As an example, he mentions all those surnames ending in ‘ich’ – unless they migrated to Malta in the 1990s, this is likely to be traced to 18th settlers in Senglea, a corsairing stronghold. 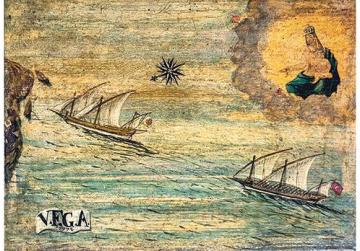 “Malta mixed with all nationalities and religions,” he said.

“And even when we were fighting foreigners, we’d still be trading with them on the black market.

“Otherwise, we’d have died of hunger.

Financially, the industry paid off very well. Women would also put their money on ships, as it was considered a ‘safe investment’. Profit sharing was also regulated by law.

“This is all documented, and we know how much money was exchanged and in which shares,” he added.

“The government would take 10 per cent. The nuns, who prayed for your success on the seas, would get five per cent. Everything on the island was geared up for war.”

The system was accepted all through the Mediterranean region up to the 1850s and, while we may not have invented the wheel, we certainly perfected it.

“Not only did foreigners settle here to become licensed corsairs, but we also have other cities and countries using Malta as their corsairing flag,” Mr Gauci said.

“Take Modena, a land-locked city – their fleet of corsairs and ships was based here; they would send out armed ships from our harbour in the name of the city.”

And, for those keen on seeing evidence of Malta’s wilder days first-hand, some artefacts from the day still survive and are on show at the Maritime Museum, in Vittoriosa.

These include a treasure chest, weaponry, artillery and paintings depicting various victories at sea, among others.