Thirty-two new coronavirus cases were identified between Thursday and Friday but more than double that number of patients – 65 – recovered, official statistics showed.

Speaking during a press briefing, Superintendent of Public Health Charmaine Gauci said that three of Malta’s 624 COVID-19 patients are in intensive care. Those three patients are currently breathing with the help of a ventilator.

A further five patients are receiving treatment at Mater Dei’s Infectious Diseases Unit, while 14 patients are at Boffa Hospital, 14 are at St Thomas Hospital and 22 are within Mount Carmel Hospital.

The average local coronavirus patient is recovering from the virus after around 15 days, she said.

“This is very important as it shows that the measures we implemented are working,” Gauci said.

She still urged vigilance, however.

“The numbers are going down, but we have to remain alert. If cases are decreasing it is because the public has been following restrictions we have implemented,” she said. 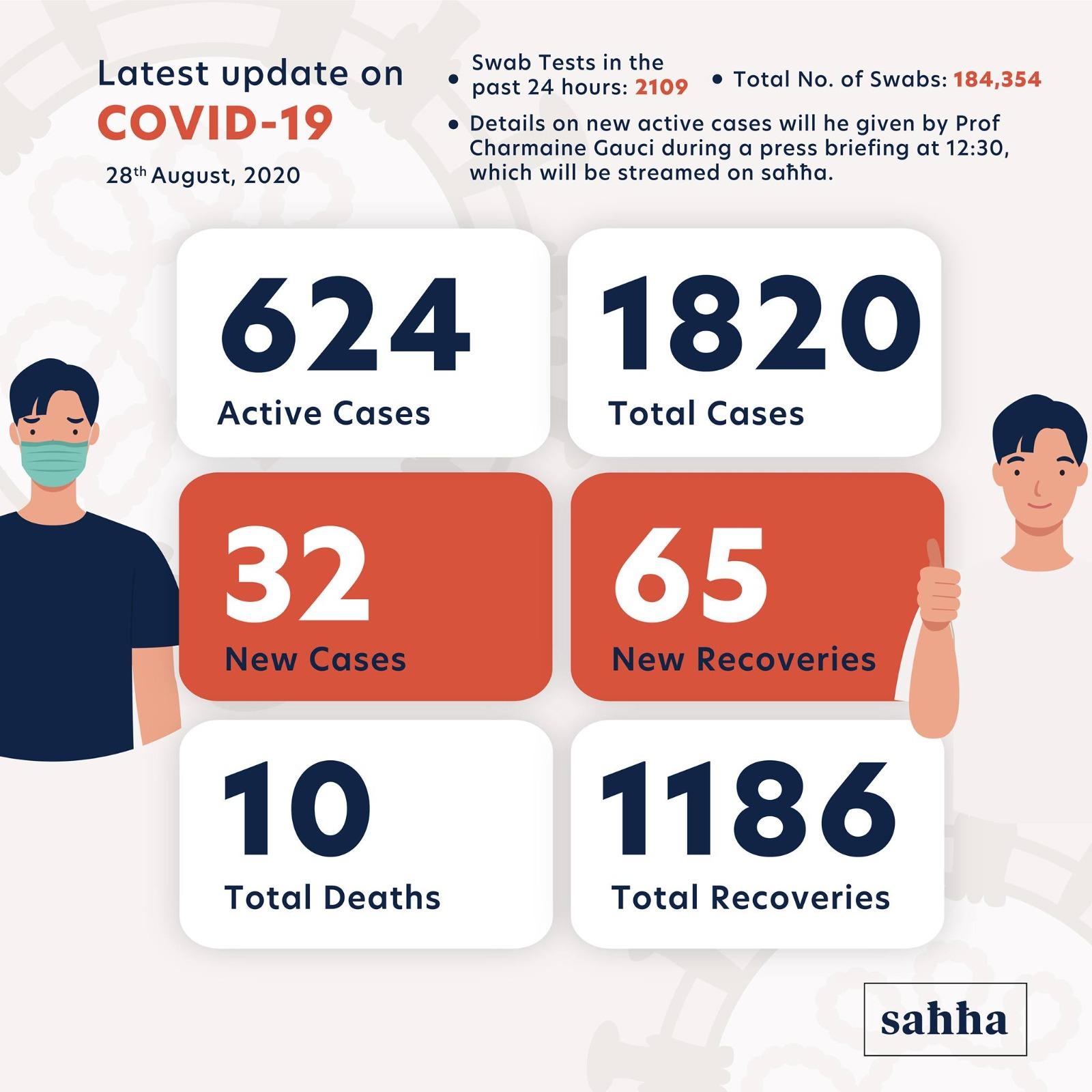 A single nursing home had been linked to 24 cases, including one who is currently in intensive care.

Just seven cases have been traced to restaurants, with none of those being detected this week.

The average age of local COVID-19 patients was relatively low when case numbers surged in July. But that appears to be changing now, Gauci noted.

“We are seeing an increase in the number of older people getting the virus,” she said, noting that the average patient age was now at around 40.

She advised older people to be mindful of the places they visited.

Gauci emphasised the importance of people taking the necessary precautions while at work, especially if they worked in office environments. Using masks in such cases was crucial, she said, especially when many people were likely to mingle together.

“Avoid unnecessary contact with others and try to stick to the same people, even at the office,” she said.

As of Friday, all social events permitted can only take place if they require patrons to be seated. This also applies to weddings.

Gauci said the measure was intended to reduce the number of people intermingling while standing up, as this was a higher risk than when people remained seated.

Gauci noted that authorities had so far carried out 99 random swab tests of people arriving in Malta at the airport. Of those, three had tested positive.

She reminded viewers that as of midnight, Tunisia and the Czech Republic would be added to Malta’s amber travel list – meaning travellers from these countries will have to present a negative COVID-19 test taken within the previous 72 hours to enter Malta.

Two migrants among a group which was brought to Malta last week have tested positive for the virus, Gauci said.

‘Nobody has tested positive twice’

Answering a question, Gauci said that there were no cases in Malta of a person having been infected with the virus twice. Reports about such cases from overseas were still being studied, she said.

Gauci indicated that schools would reopen come September, saying “we need schools and children to get an education”.

She said it would be important to ensure proper guidelines to minimise transmission risks and also said that an EU-wide meeting with the World Health Organisation, scheduled for next week, would help inform authorities on how to manage the situation.