Business owners and self-employed people whose trade has been most affected by a coronavirus-sparked slump will have all tax and social security payments due for March and April postponed, the prime minister said on Saturday.

The payments will instead be deferred to a later, as yet undefined date.

Businesses in the tourism, hospitality, recreation, transport and some manufacturing sectors will be eligible for the payment holiday, Abela said.

Companies which invested in teleworking systems would also be eligible for a 45 per cent refund up to €500 for each worker, Economy Minister Silvio Schembri added later.

Finance Minister Edward Scicluna said the temporary relief would be a big boost to businesses, arguing that such payments amounted to roughly 20 per cent of their costs, with that estimate not including VAT payments.

Economy Minister Silvio Schembri said that the measure would effectively allow businesses to hold onto the equivalent of one-third of each worker’s salary to reinvest.

“There is no need to sack workers,” he said.

Finance Minister Edward Scicluna also announced that the government was putting together what he called a “mini-Budget”, which would readjust financial targets and allocations to suit the new situation Malta found itself in.

“We will use the surplus to create a mini-Budget,” he said, reminding people that Malta had strong GDP growth to help it weather the crisis.

Schembri echoed that message, saying Malta’s finances “have never been so good” and that families had record levels of savings.

Scicluna said that the Finance Ministry would be assessing which departments needed a cash injection to help cope with the crisis. He highlighted health services as an obvious candidate.

The finance minister acknowledged that the government might have to consider measures to help employees forced to remain at home and stay away from work. Any such measures would depend on how the spread of COVID-19 progressed, he said.

Banking associations, Scicluna said, have promised to do all they can to ensure liquidity for businesses.

Ensuring the liquidity of banks themselves is a different issue, he said. A Eurogroup meeting of EU finance ministers scheduled for early next week will shed more light on how EU member states will tackle that.

With queues forming outside banks around the island, Abela once again appealed for calm and reassured people that banks would remain open.

HSBC has announced that it will close all its branches except for five key ones, to help employees who have to take care of children at home due to school closures.

Both it and Bank of Valletta have urged customers to use electronic services for their banking needs wherever possible.

No need to panic buy

Abela also urged people not to fall prey to panic buying. There were good stocks of all foods and essential items and Malta is in no risk of running out of either, he said.

People have been flocking to supermarkets to stock up on groceries and essential items in recent days, with long queues reported at several stores across Malta and Gozo. 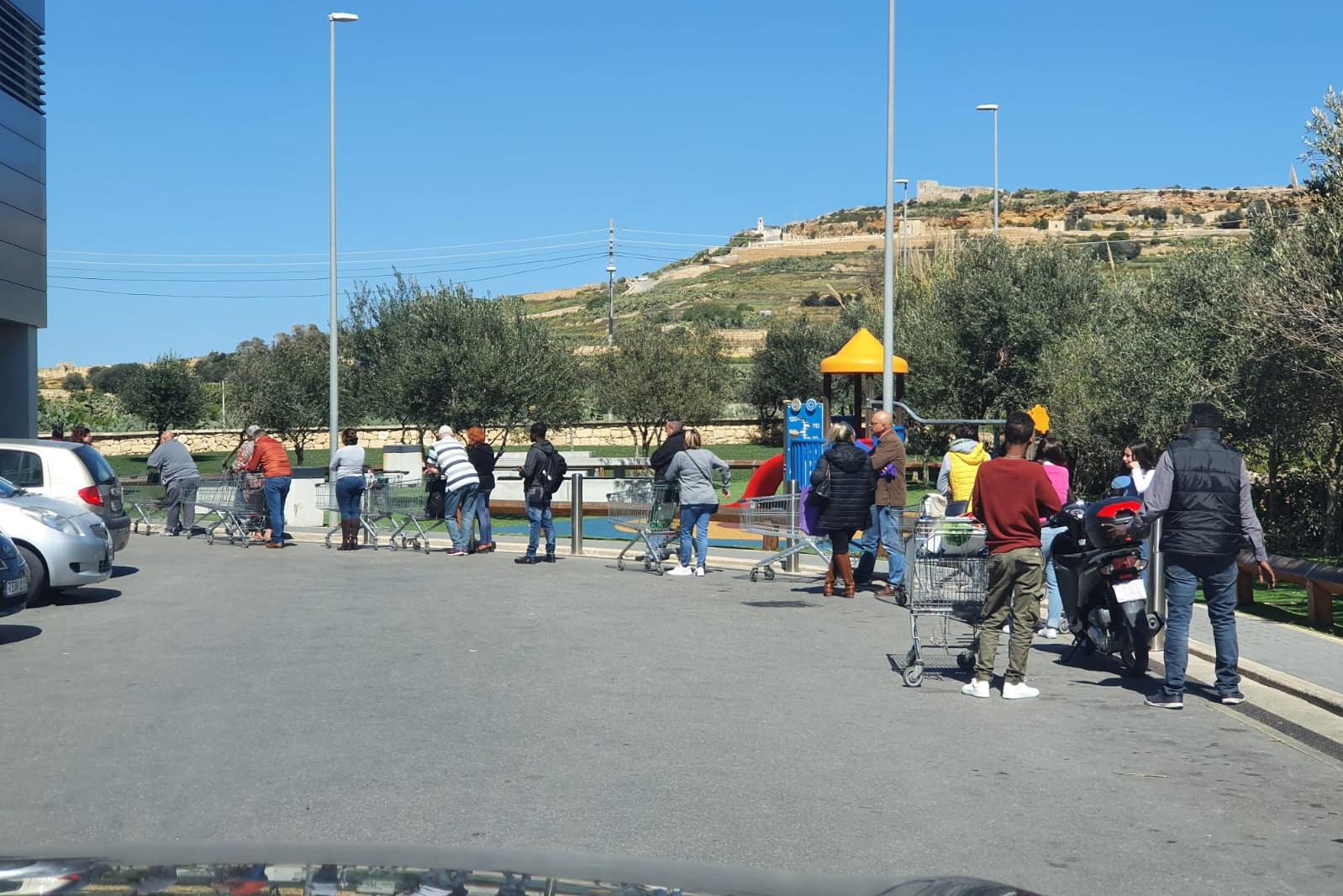 Queues forming outside a Lidl store in Gozo on Saturday.

The Nationalist Party has demanded help for struggling businesses, arguing that many face collapse unless they are giving some breathing room by the government.

It has also suggested a temporary 50 per cent discount on electricity tariffs for March and April, to help business owners and families get by during times of reduced income.

On Saturday, PN leader Adrian Delia also urged employers to be mindful of their employees.

"Do not overburden your workers," he said, adding that the government had a duty to help employers.

"We all have to lift as much as we can. We built these industries together and we have to work together to protect all that we built".

The Malta Chamber of Commerce said it welcomed the government’s first
steps to support businesses.

"While it is understood that this is only the first set of incentives which the government intends to put in place to help businesses weather the storm, The Malta Chamber expects the government to be bolder and indicate clearly when it is going to dig into the country’s reserves to make good for the hardships companies are currently facing and enduring through no fault of theirs," the chamber said.

It welcomed the government’s incentives to promote teleworking and the temporary tax breaks.

The chamber, however, disagreed with a government decision to declare quarantine leave as equivalent to “jury leave” - which means it has to be paid by businesses.

"This decision is unacceptable and will have serious negative effects on
our businesses and the economy at large."

"Quarantine leave needs to be paid by the government, from its resources and reserves otherwise this will threaten the very survival of businesses," the chamber said.

Regarding calls for a lockdown, the chamber warned that while there could be benefits for health, unless there was proper dialogue and planning in the appropriate fora, the consequences of a lockdown would be catastrophic economically.

Although at this stage, some industries have been affected more than others, if the situation persisted, more sectors would be affected and therefore the fiscal measures needed to be spread out to more sectors, including self-employed.

"The measures which were announced will have to be supplemented with other more substantial fiscal measures," it said.

The MEA said that thus far, layoffs are only being resorted to as a last recourse, but the situation might change if things take a turn for the worse, and if the slowdown persists over time.

"The decision to impose by stealth on employers, payment for quarantine leave by amending a legal notice which was never discussed with employer bodies is unacceptable and deplorable," the MEA said. It called for an immediate repeal of this legal notice, arguing that the financial burden of quarantine leave should be carried by the state in the same way that it is compensating public sector employees.

"Employers are already being penalised by a drastic disruption in their workplaces and they should not under any circumstance be expected to make good for quarantine leave. Adding such costs increase the probability of lay-offs in the private sector."