Human error or a technical fault were the likely causes of this morning's plane crash in Malta which killed five Frenchmen, Prime Minister Joseph Muscat told parliament this evening.

Footage of the crash clearly showed there was no explosion on board, Dr Muscat said, though he insisted that only a full investigation will reveal the cause of the incident.

"The aviation experts were so far indicating that there was no foul play. The likelihood was that the crash was caused by a fault or human error although at this stage nothing could be ruled out," he said.

He was speaking after the Opposition this evening in parliament demanded clarity on the plane crash and the purpose of the aircraft's mission.

One should would await the outcome of these inquiries and his appeal was for prudence until the facts were established.

However, according to initial observations from video and eyewitness accounts, including AFM personnel and two commercial pilots who witnessed the incident, there was no explosion before the crash, and the aircraft appeared to have suffered a technical fault.

The remains of the five men who died on board have been recovered.

The government insisted this was part of a French customs surveillance cooperation which has been in progress of five months to track illegal drugs and human trafficking. Malta was giving logistics assistance.

Dr Muscat said claims that the plane was headed to Misurata were probably prompted by a Medavia plane, which was also flying to the Libyan city.

Dr Muscat said the Maltese government never said who the crew members worked for, but said that the operation was under the aegis of the French Customs. It was up to the French government is the crew actually worked for somebody else.

The Maltese government had given its consent to a French customs operation because such operations were needed. In the past few days, 3,000 people had crossed between Libya and Italy. Malta was located in a dangerous region and all countries needed to collaborate to stop trafficking of weapons, drugs and people.

The French and Maltese government were working in unison and had not contradicted each other, Dr Muscat said. He did not exclude a joint inquiry to establish the facts.

Dr Muscat said the government was working in the best interests of the country and in terms of the constitution, as the former government had done when it allowed 'rendition flights'.

Did Maltese government give its consent, Busuttil asks

Nationalist leader Simon Busuttil regretted that the Opposition had not been contacted by the government over this serious incident.

He observed that the French authorities had denied that any customs officers were involved. The French Defence Minister had admitted that members of his ministry were aboard.

But the Maltese minister had stuck to the line that this was a customs operation. 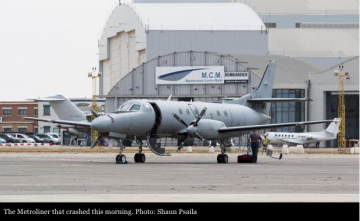 Dr Busuttil asked whether the Maltese government given its consent for this operation and whether such operations would be reviewed.

He asked whether foul play had been excluded and whether precautionary measures were taken to protect civilians.

PN deputy leader Beppe Fenech Adami asked if the pilot had indicated anything wrong before the crash occurred.

Le Monde had quoted the French Defence Minister refusing to give information on the destination and objective of the mission. It had also been reported that the aircraft was equipped for spying missions.

PN deputy leader Mario de Marco asked if the aircraft was based in Malta or whether it had arrived from another country and who was responsible for its maintenance.

Marlene Farrugia (Democratic Party) asked whether, in the case of such small aircraft safety checks were as rigorous as commercial aircraft.

The operation had been in progress for five months. Its purpose was to track routes used for human trafficking.