Malta is failing to live up to its obligations to guarantee and safeguard freedom of expression, a number of international press freedom organisations said at the end of a two-day mission to Malta.

In their preliminary findings, the groups said the apparent lack of progress on the investigation into the murder of Daphne Caruana Galizia was having a chilling effect on public interest investigative reporting.

“As a result of the assassination, Malta’s international image has been severely negatively impacted. The only way to start to repair this reputational damage will be to achieve full justice for Daphne Caruana Galizia and her family,” the groups said.

Between Monday and Tuesday, the groups met senior government officials, including Prime Minister Joseph Muscat, culture minister Owen Bonnici and attorney general Peter Grech, as well as journalists and activists from across the media landscape.

The organisations said their meetings had failed to assuage doubts over the lack of any “meaningful result” in the investigation beyond arraigning the three hit-men, and over “the investigation’s commitment to bringing the mastermind of the attack to justice”.

“Indeed, officials, generally expressed satisfaction with the investigation so far - a jarring sentiment given the apparent lack of advancement,” they said.

They said their conversations had revealed that several relevant individuals had not been interviewed, leading to the conclusions that “Maltese authorities are not seriously considering the possibility that Caruana Galizia was murdered for her scrutiny of political or business issues”.

They expressed disappointment that the Prime Minister had refused the request for an immediate public inquiry into whether the assassination could have been prevented - as requested by the family.

His statement that such an inquiry could only take place after the conclusion of the magisterial inquiry - which has no deadline - was a “de facto delaying tactic,” they said.

Removal of memorial is part of ‘manufactured hate’

The organisations also expressed profound concern over the repeated destruction of the protest memorial to Ms Caruana Galizia at the Great Siege monument, and the “vilification campaigns” by authorities, including members of the OPM and Valletta 2018 chairman Jason Micallef.

They called for a “safe and enabling environment for freedom of assembly and the right to protest” at the Great Siege monument site. 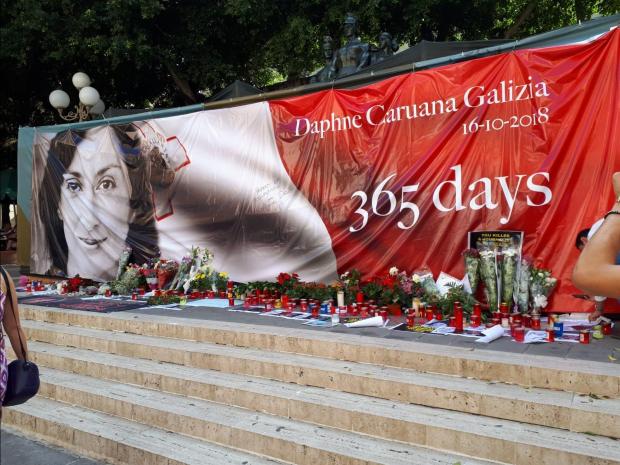 The banner put up by protesters on Tuesday was still there the following morning.

They highlighted the pressures facing journalists, including the “preferential and politicised allocation” of government advertising subsidies to media outlets supportive of the ruling party.

During a vigil held on Tuesday evening to mark one year since Ms Caruana Galizia's assassination, protesters defied the government and unfurled a large banner at the site of the Great Siege Memorial.

"Do not dare remove this memorial," an NGO representative told the government during that event.

As of Wednesday morning, the banner, flowers and candles placed at the makeshift memorial site were still there intact.

“Trolling and online vitriol have become a de facto part of everyday journalism,” the NGOs added during Wednesday's press conference. “Reports of secret Facebook groups used to coordinate attacks on individual journalists raise profound concerns about the environment in which journalists work.”

“Doing live social media interviews is not equivalent to a press conference, and does not enable an adequate level of public scrutiny,” they said.