Former General Workers’ Union General secretary Tony Zarb hit out at activists calling out for justice in the wake of Daphne Caruana Galizia, saying "the most important thing is that she never returns".

He urged the activists to "continue with their antics" and to continue putting flowers in her honour, but he said Malta was going through its best of times "l-aqwa żmien".

His comments drew a prompt response from former Nationalist Party general secretary Paul Borg Olivier, who once again wrote to the President asking her to strip Mr Zarb of the Ġieħ ir-Repubblika award given to him in 2015.

In a reply, the President said that one could only be stripped of the award following a resolution of the House of Representatives.

This is not the first time that the former GWU stalwart and consultant to Minister Konrad Mizzi hit out at activists. When Occupy Justice women took to Castille place to protest, Mr Zarb compared them to prostitutes, after which Dr Borg Olivier had made a similar request to the President.

Equality Minister Helena Dalli had at the time condemned the “disparaging comments” made by Mr Zarb.

His comments also drew outrage from human rights NGO Aditus Foundation, who urged the women to file a report with the National Commission for the Promotion of Equality, since being called a prostitute could qualify as harassment.

Mr Zarb eventually removed his post and apologised to “genuine women” irked by his comments. 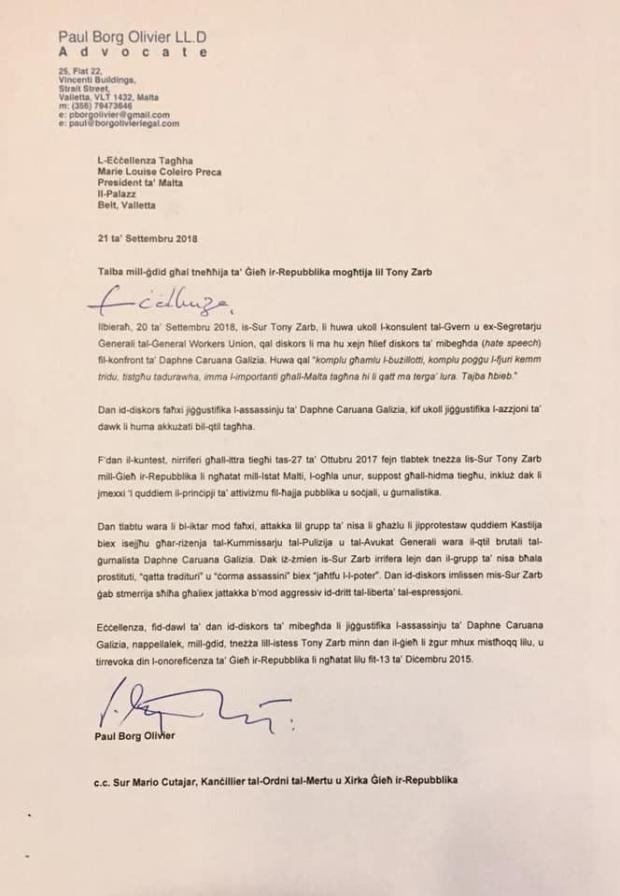