Confusing signage, unfinished jobs and single lanes are creating traffic jams across Malta’s roads, compounding the disruption already caused by the 121 road projects currently under way across the island.

After months of commuting from the bedroom to the home office, I was elated at the prospect of returning to the office.

But my jubilance was short-lived. Early-morning messages from those already out and about started to flood my phone – “Traffic everywhere!”

Gridlock in some parts, shabby roadworks in others. Video: Claire Farrugia/Karl Andrew Micallef

While aware of the bigger projects under way, like the Central Link, I tried to establish why so many people were complaining of chaos on the roads.

The reason is obvious: too many projects are taking place at once, with drivers stuck in tailbacks because of one project, forced to face the same delays a few miles up the road because of more roadworks, some of which appear to be moving at a slow pace.

Others seem to have come to a complete standstill, although data supplied by Infrastructure Malta suggests most projects will be completed by the end of summer.

Most roadworks have forced the merging of two lanes into one while works are carried out on the other side of the road. This is the cause of delays in areas impacted by the Central Link project, for instance. Although there are clear signs to guide drivers, the fact that lanes are sometimes very narrow force motorists to slow down.

The changes to the main road heading to Mġarr have led to evident hazards, with one lane becoming so narrow that drivers are at one point forced to drive inches from the wall. On the other side of this road, the infamous red and white plastic barriers line the lane. But with nothing to hold them in place, these were just as problematic: drivers have to constantly be on the lookout to avoid hitting the ones knocked into the way.

Plastic barriers are among the biggest obstacles since many are not properly aligned and drivers could often be seen trying to avoid them.

This was especially the case at Triq il-Wied in Iklin and Triq Durumblat in Mosta. According to Infrastructure Malta, the final asphalting to complete the rebuilding of Triq il-Wied was postponed by a few weeks because manhole covers imported from abroad were delayed. The barriers are now strewn all over the road with no markings or signage in place to guide drivers.

At Triq Durumblat, the barriers and heavy machinery by the side of the road were the only indication that works were under way. Motorists seemed unsure whether they were allowed to drive through, resulting in many a U-turn. The resulting slowdown in traffic spilled onto surrounding roads. 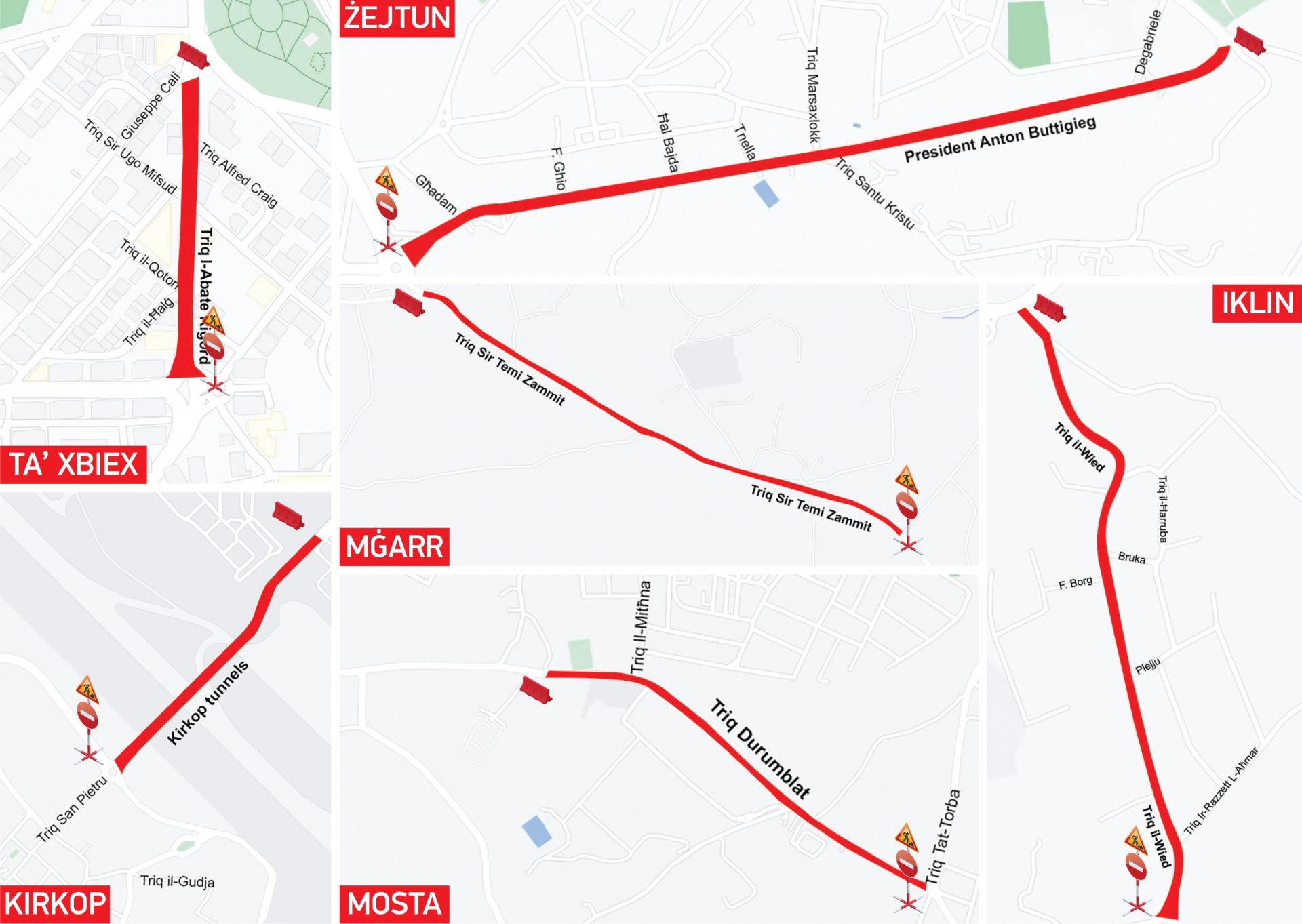 Red-light districts: A few of the many roadworks under way around the island. Maps: Google Maps. Graphic: Christian Busuttil/Design Studio

At the Kirkop tunnels, tools and heavy machinery were also behind some of the delays. Drivers were forced to manoeuvre past the machinery, often having no option but to drive onto the other lane, slowing down the traffic. Drivers have also complained about the slow progress of works at the Santa Venera tunnels at night.

When contacted, an Infrastructure Malta spokesperson said there were a total of 121 road projects ongoing. He said all contractors carrying out works for the agency are “contractually obliged to keep their sites safe and to prevent any hazards to road users, road workers, residents or other individuals in the same area”.

The agency said its supervisors inspect sites regularly and ask contractors to take immediate preventive measures as soon as hazards are identified. When contractors fall below applicable safety standards, they are fined.