Restaurants and snack bars will reopen in two weeks' time, but their opening time will be limited to 5pm, Prime Minister Robert Abela said at a press conference on Sunday.

Speaking at a press conference on the COVID-19 situation, a day before non-essential shops and services reopen after a seven-week shutdown, the prime minister revealed plans for another easing of restrictions.

The relaxation of COVID-19 restrictions on Monday will also see groups of up to four people allowed in public – up from two – and four households can gather in private residences, also doubling from two.

At the opening of his press conference, the prime minister said the country had managed to keep the number of people infected by COVID-19 under control. The situation in the hospital is a very good one.

That means that as planned and already announced, a number of measures will be eased as from tomorrow, Abela said.

More measures will be relaxed on May 10 as follows:

The prime minister said he was optimistic because Malta was attacking the virus with the vaccine while protecting through restrictions.

He said that in the coming days the government will announce targeted measures to help people more.

And in the coming weeks the government will also issue consumer vouchers to boost the economy.

Protocols, including wearing masks, must be observed

Health Minister Chris Fearne said protocols by the health authorities had to be followed as measures were eased.

This week, he said, was globally, the worst week of COVID-19. Just yesterday, almost 1 million new cases were detected. The pandemic around the world was at its worst.

Over the past 24 hours Malta had 25 new cases and the positivity rate was very low at 1.8 per cent. 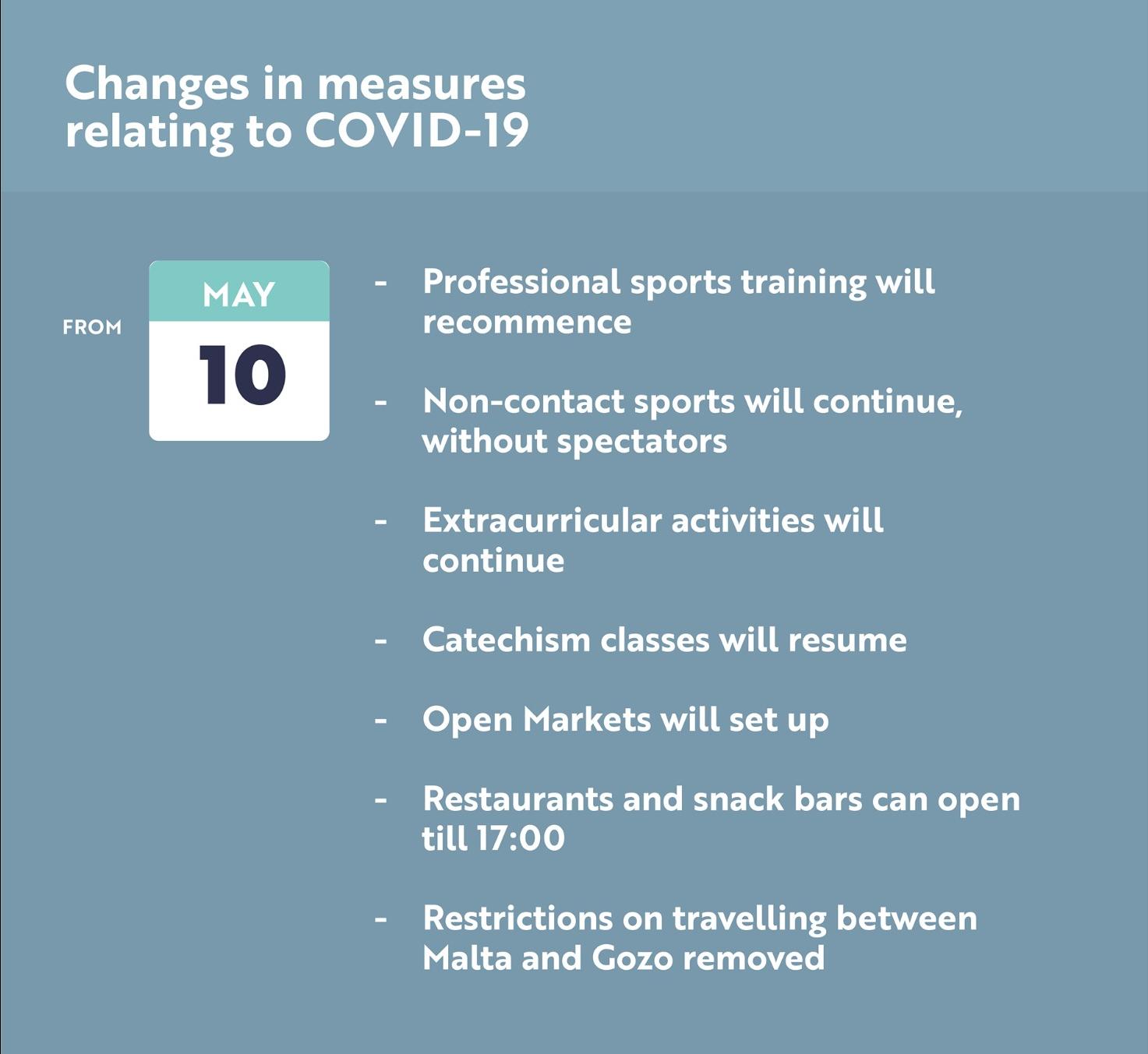 Mater Dei Hospital, which had over 140 virus patients in March, now had 35 including three in ITU. Another four were in the ITU but they were not positive.

"Although the pandemic is still here, the situation in Malta is under control. Our decision to ease measures some weeks ago was a good one because numbers remained low," Fearne said. He warned, however, that measures could be re-imposed if protocols were not observed and cases increased.

Fearne underlined the success being achieved by the vaccination programme. He said that half of Malta's adults have been given at least a single dose of the vaccine, a good figure well ahead  of the EU average.

"The UK reached this milestone yesterday, we will reach it this evening," he said.

He said that all those over 60 who, for some reason have yet to be given an appointment for the vaccine should register online or via SMS.

He said that 64 per cent of those over 50 have been vaccinated.

In the two days since we opened up the registration for those over 40s, 31,000 had already been vaccinated or given an appointment for the coming days.

By the third week of May, the authorities will go towards the next age group.

On the vaccine certificate, Fearne said this will come into force in May in Malta, and would facilitate travel.

Visitors must produce a negative test before boarding plane

The authorities will insist that those coming to Malta must present a negative test certificate before they board the plane. This, Fearne said, was crucial to protect the country.

He said mass events and parties will not kick off in June. Only cautious and safe tourism would be allowed.

He urged everyone to observe protocols and restrictions.  The prize of this would be that Malta would feature on the 'green' list for travel in June.

Charmaine Gauci, Superintendent for Public Health went over protocols which must continue to be followed, especially from Monday as non-essential shops and services reopen.

She said changing rooms can be used but the operators must sanitise the room
and clothes tried on must be 'quarantined' for 72 hours.

On weddings, as already explained, the plan is that weddings can be held on June 1 although guests guests must be seated and strict protocols must be followed.

Guests, for instance, must be seated with tables of up to six people unless people are from the same bubble. Outside venues will be capped at 300 people, and inside at 100.

Asked whether the 5pm rule applied to weddings, Gauci said by the time weddings are allowed to take place, the authorities hoped the situation would be better and more rules would be eased.

J&J Vaccine to be used

Replying to questions, Fearne said the Johnson and Johnson vaccine, approved by the European Medicines Agency last week, will start being administered in Malta in the coming days.

Both Fearne and Gauci underlined the importance that masks continue to be worn. The authorities will continue to monitor the situation closely in Malta and abroad.

No date yet for reopening of bars, gyms

Questioned about when bars and gyms will be allowed to reopen, the prime minister said they will remain shut on May 10. "I am aware they are the worst hit but we have to continue to be guided by science," he said.

"We do not want to ruin a summer of work. But we will not abandon any sector."

Replying to other questions, Gauci said the fact restaurants will have to close by 5pm had been decided because restrictions needed to be eased gradually.

He said language schools are to remain closed.

On vaccines for virus variants, Fearne said he did not rule out the possibility of boosters for vaccines and Malta was already making its preparations, just in case.

Asked about the studies being carried out on a local thrombosis case involving a person who had received the vaccine, Fearne said one blood test has come back and there was no link to the vaccine. The authorities were still awaiting a second test.