Balzan residents are livid after a second sleepless night in a row due to roadworks carried out throughout the night in Triq Birbal.

Works started on Thursday at around 7.30pm, with jackhammers and other heavy machinery digging roads and buzzing noisily until the early hours of Friday morning. 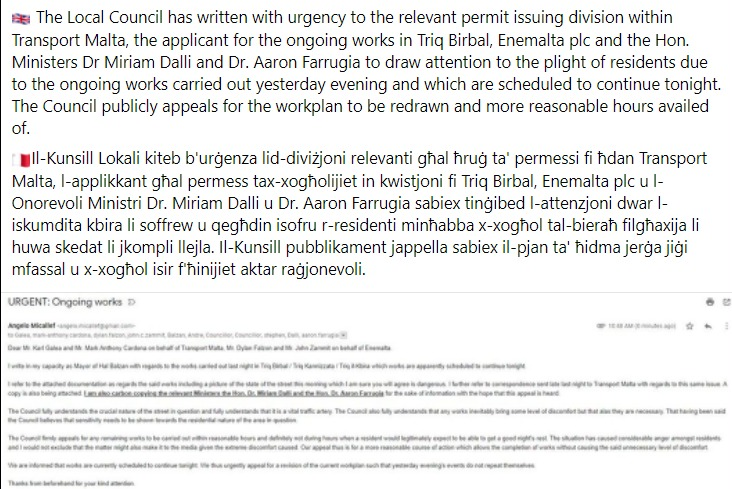 Balzan Mayor Angelo Micallef called on the authorities for more sensitivity towards the residents. Photo: Facebook

It asked Transport Malta, as the applicant for the ongoing works, as well as Enemalta and the two ministers responsible for the two entities, Miriam Dalli and Aaron Farrugia, to rethink the workplans for these works.

The authorities did not reply to questions sent by the council on Friday, and those living in Triq Birbal and the surrounding areas were subject to more noisy roadworks again on Friday night.

“My daughter is sitting for her Masters exams this week. She hasn’t slept for two nights in a row," said resident Paul Ciantar, joining several residents who deem the timing of the works unacceptable.

Another resident said he got back home around 11pm on Friday and tried to go to sleep, only to be woken up by the persistent trembling.

“I tried watching TV at 1.30am. I could see things shaking on the shelves in my home”.

Works, he said, persisted until 4am.

Other frustrated residents said they had to shift glassware on shelves to avoid breakages.

“My house was shaking. It is an utter disgrace," said another frustrated resident.

Some of those living in the area even tried contacting the police about the works, only to be told they had no authority to stop them since they were covered by a valid permit issued by Transport Malta.

Mayor Angelo Micallef has appealed for smart planning and more sensitivity by the authorities towards those living in the area.

The police indicated that the same permit also covers works for the coming days, meaning Balzan residents may be in for more sleepless nights until the works are completed.

Times of Malta has sent out questions to both Enemalta and Transport Malta regarding the ongoing works.