One of Daphne Caruana Galizia's sisters publicly confronted Opposition leader Adrian Delia at a makeshift memorial to the murdered journalist on Tuesday, calling him and his Nationalist Party colleagues present "crooks".

The confrontation ended with a wreath which the PN delegation placed at the site in tatters and on the ground.

Dr Delia stood before the makeshift memorial at the foot of the Great Siege Monument at about 10am, together with other top Nationalist Party officials.

As they prepared to lay a wreath at the memorial site, they were confronted by one of Ms Caruana Galizia's sisters, Helene Asciak.

Ms Asciak made it clear to the the political delegation that they were not welcome, and asked them to "go away".

"Can you please have respect?" she asked them as she urged them to step away and "pay your respects in court".

The politicians shrugged off her attempt to block them and placed the wreath anyway.

"Shame on you, crooks," she told them as they did so. After the wreath was laid, she took it and threw it on the ground nearby.

Dr Delia had also placed a wreath at the Valletta site last year, on the first anniversary of the murder.

Wednesday marks the second anniversary since Ms Caruana Galizia was killed by a car bomb outside her home in Bidnija.

Ms Asciak's niece, Megan Mallia, also criticised Dr Delia for laying flowers at the memorial despite his criticism of the journalist while she was alive.

"I couldn't be prouder of my aunt Helene for showing them up," she said.

Ms Caruana Galizia had openly opposed Dr Delia's bid to head the Nationalist Party and had published a series of blog posts highlighting questionable dealings he was involved in while working as a lawyer.

Matters reached a head when an angry Dr Delia said his agenda would not be dictated to by Ms Caruana Galizia, who he described as a 'biċċa blogger' [tinpot blogger].

Dr Delia had sued Ms Caruana Galizia for allegations made against him. He dropped those cases within days of the murder.

Over the past months, Dr Delia has been critical of the government's handling of the murder investigation and has backed the family's call for an independent inquiry into the circumstances around the murder.

The party stuck to that line in a statement issued on Wednesday afternoon in which it accused the Prime Minister of being keen to keep the truth hidden.

Everyone had a duty to encourage national consensus on this issue, the PN said. It urged all those of good will to attend a vigil in Ms Caruana Galizia's memory, which is scheduled to take place at 7pm in Valletta on Wednesday. 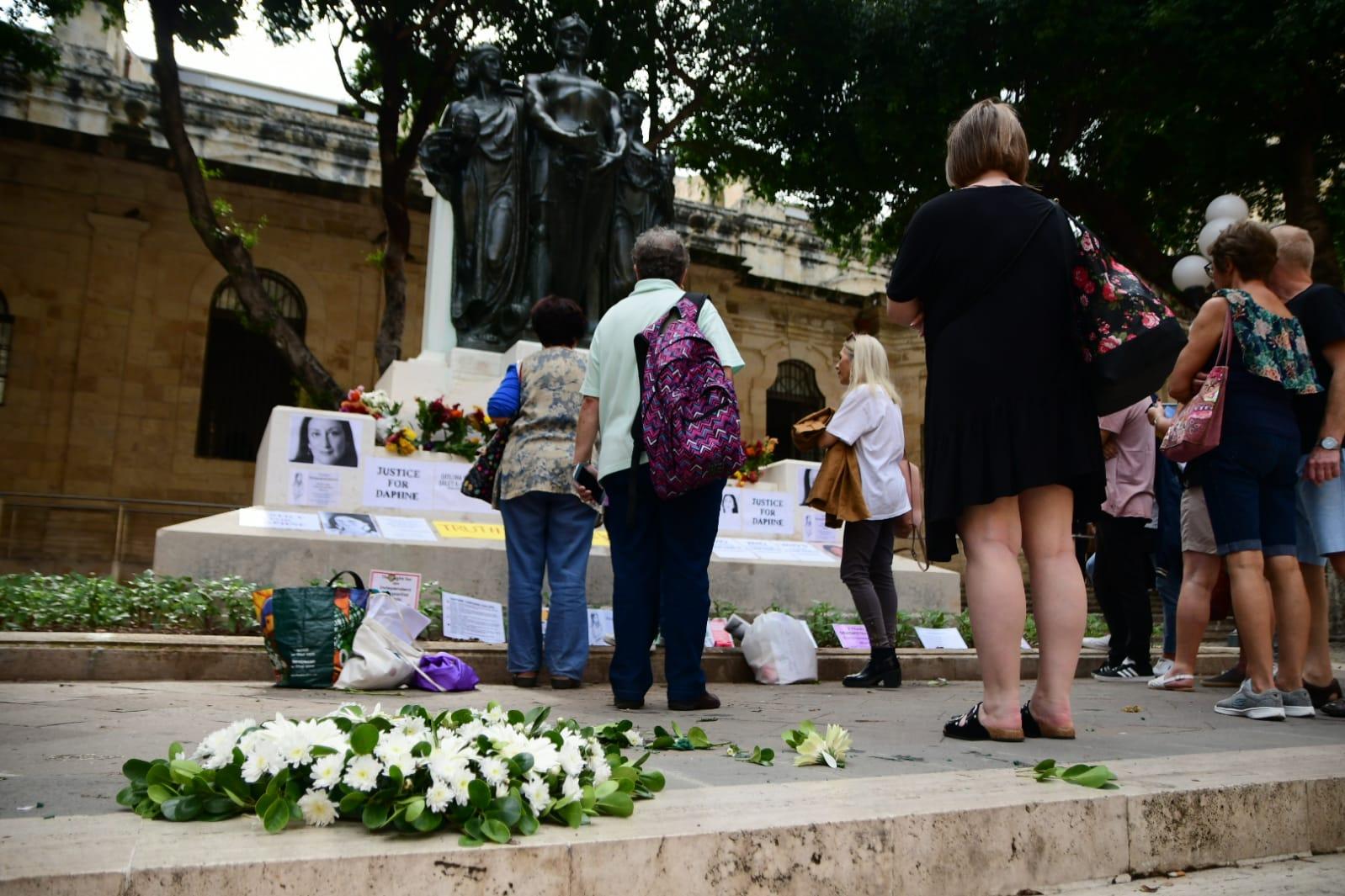 People pay their respects, as a wreath placed by a PN delegation lies on the ground. Photo: Jonathan Borg

The makeshift memorial has itself been the scene of an ongoing battle between activists and the state, with flowers laid by mourners being cleared within hours by government employees.

A court is currently hearing a case against the government for removing the flowers, in an alleged breach of freedom of expression.