Owners of non-essential shops lifted their shutters for the first time in 42 days on Monday but faced the prospect of a slow return to normality as Malta, like the rest of the world, continues to battle COVID-19.

Many spent the initial hours cleaning shop facades as people appeared to be slow to venture inside. Shop assistants could be seen polishing windows, dressing up mannequins and preparing the precautions to safely welcome their customers back, such as scrubbing surfaces, preparing hand sanitisers and placing stickers on the floor marking where clientele can stand a safe distance away from other shoppers.

Non-essential outlets were ordered closed on March 22 as the number of COVID-19 cases increased, but the virus transmission rate has over the past two weeks dropped to below one, enabling the health authorities to allow a reopening of some shops, with a number of limitations.

People must wear face masks to enter shops, and getting one was a bit of a problem on Monday, with pharmacies refusing to sell any until an issue over the selling price cap was settled.

Changing rooms at clothes shops must remain closed and any items, once returned, have to be set aside for some days. Cafes and restaurants are still closed.

'We cannot stay at home forever'

Most shop owners welcomed the decision to return, though not without some concerns.

"We're trying to get back to normality. We cannot keep avoiding going back to work. People need to work. We cannot stay at home forever," Christine Pace, who manages a Superdry outlet, told Times of Malta.

She praised the health authorities for having given adequate guidance and support for the reopening of shops.

Eugenio Bonello, who operates a tobacco shop in Tower Road, said the decision to reopen couldn't have come soon enough, as he had already made significant losses, having had to throw away perishable stock.

He complained however that he was not been entitled to help and had therefore been losing money. 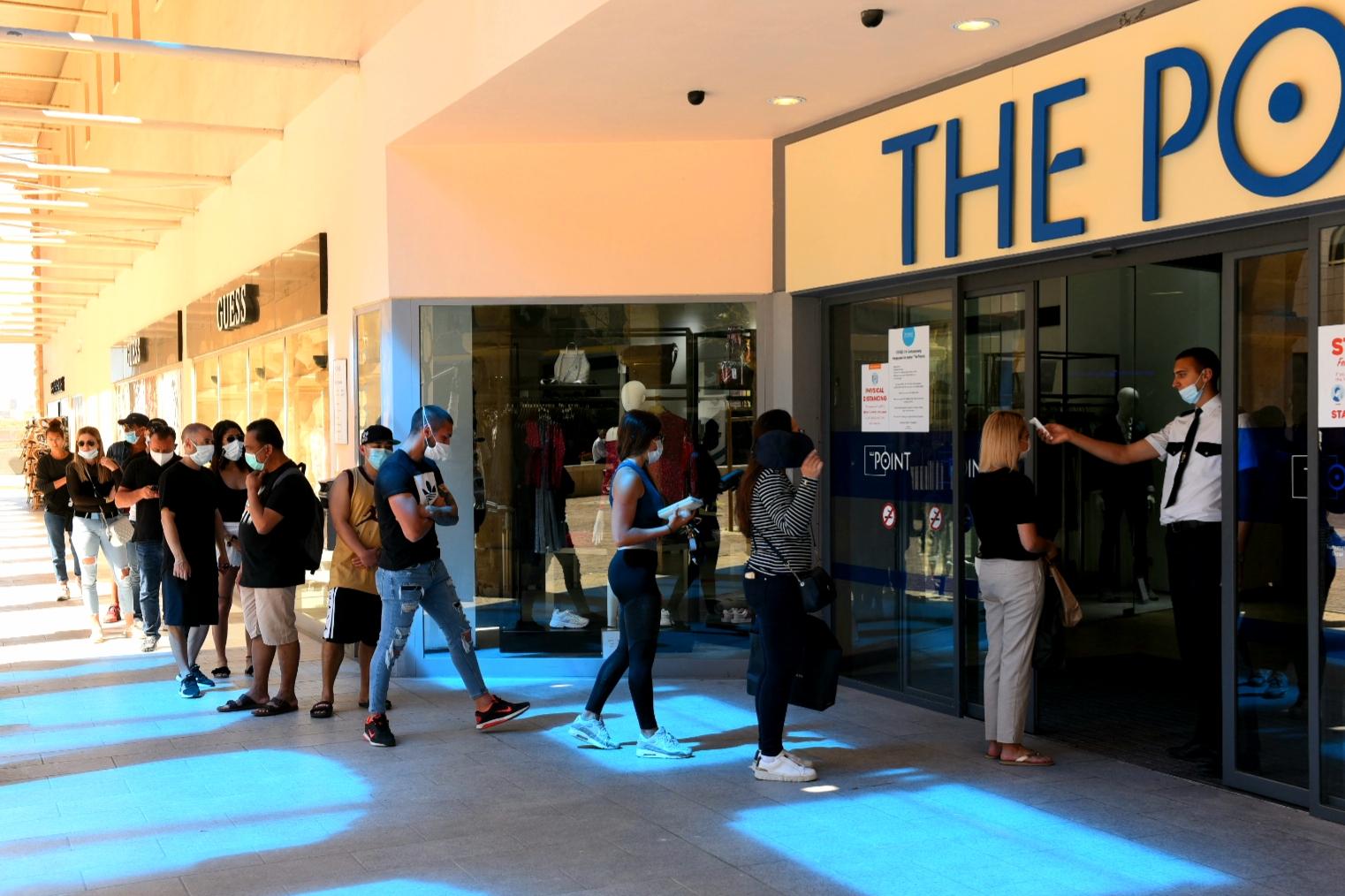 Shoppers queue up outside The Point in Sliema. Photo: Chris Sant Fournier

"But even for myself, coming back to the old routine is a big help."

He told Times of Malta that he had served only two customers by late morning, where normally he would have seen a hundred people walk through the door by that time.

At The Point shopping mall, in Sliema, a group of people, including staff, gathered outside the outlet's main entrance a few minutes before its doors opened. Some sheltered from the sun nearby.

Jonathan Hanson told Times of Malta he feared the reopening may have been premature amid fears of a second wave of the virus.

It's hard to say, but I think we could have left it a little bit longer," he argued.

"I understand that for the economy you have to get moving again but they are non-essential items, you can get by without them."

One Italian family said they would have preferred to stay indoors, but as warmer months are rapidly approaching, they made the trip out to purchase summer clothes.

The security team at the mall screen people for fever on entry and make sure that shoppers are wearing their masks correctly. Elderly people are being asked for identification at the door, and one disappointed woman, who could not prove she is under 65, was turned away.