Swimmer Neil Agius completed a gruelling 70-kilometre swim around Malta in under 22 hours on Saturday, raising awareness about marine litter.

Together with Gilbert Bartolo and Richard Zerafa, Mr Agius jumped in the water at Marfa on Friday for a swim that was meant to last 24 hours.

He made it in 21 hours, 52 minutes and 54 seconds. Mr Zerafa fell ill 20 hours into the swim and was taken to hospital, where he was kept under observation.

Mr Bartolo meanwhile decided to call it a day after 22 hours, when he was close to Dingli Cliffs, because of exhaustion.

“We hope that we have managed to encourage people to pick up at least three pieces of plastic waste today. In turn, they can encourage others to do the same,” Mr Agius told Times of Malta.

Mr Agius, who has represented Malta in the Olympics, came up with the idea for the initiative, aimed at creating awareness about the amount of plastic waste we generate and how we can reduce it.

A great deal of marine plastic litter is found close to the beaches, where people throw away food packaging that they consume by the sea, he said.

Although it was too early to say whether there will be a repeat of the marathon, so far the swimmers have received good feedback.

The trio are hoping to promote sustainable tourism for the Maltese islands and its economy by reducing the generation of plastic waste in the tourism industry.

To show your support for the initiative, you too can participate in the #WaveOfChange challenge by picking up three pieces of plastic waste and uploading a photo of it on social media with the hashtag #WaveOfChange. 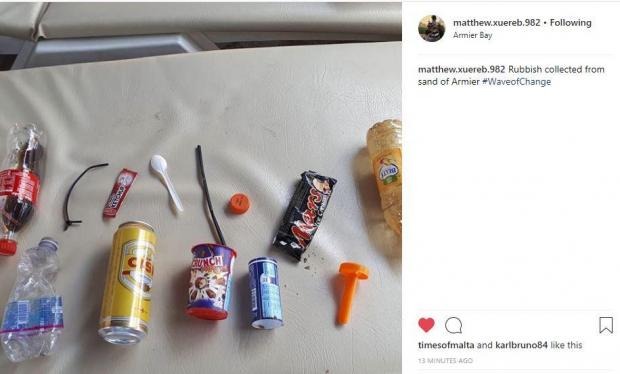 The trio have urged people to collect three pieces of litter and share their clean-up using the #WaveofChange hashtag.