Over the coming days, a dedicated team at the University of Malta will be updating the Malta Elections database with the outcome of the general election but Josef Lauri, a maths professor, is keen to add even more functions to the site.

The database is a goldmine of information which was started by an American professor of political science, John Lane, who came to Malta around 30 years ago for a sabbatical and was intrigued by the very rare ‘single transferable vote’ system.

Only Malta and Ireland use this system for national elections but a number of other countries use it for regional or state elections.

“Prof. Lane – now considered to be the leading expert on Maltese elections – started compiling data from 1921 onwards and kept it up to date all the way until the 2013 elections,” Prof. Lauri said.

By then, he was already retired from the State University of New York and in his 80s, and reluctant to let all that work lose momentum, he approached the University of Malta and offer to bequeath it, free of charge. The university jumped at the opportunity and the only downside was that Prof. Lane was unable to travel to Malta for the handover in 2014.

The database, which includes links to various articles and other websites, piqued the interest of various departments besides the maths one, who all have a representative involved: the history, economics and IT departments, the library, and the Institute of European Studies.

They took it over between them and, after improving the ‘look and feel’, began to update it, starting with the hunting referendum and the local council elections.

Assistant librarian Raelene Galea is spending a few hours a day on the site and, like Prof. Lauri, is keen to add even more to it, with the priority being a more sophisticated search facility. 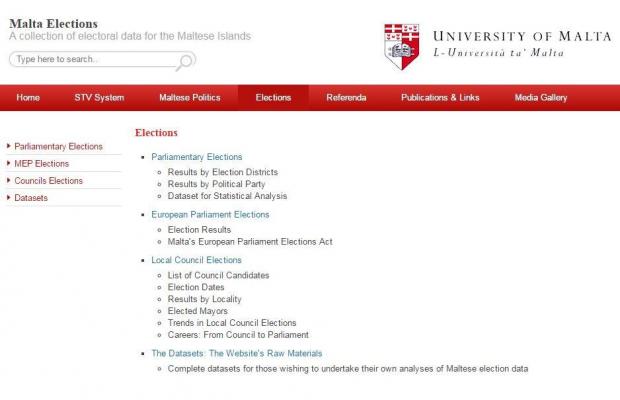 The online database contains information about all local elections.

She is braced for the huge task from Sunday onwards, which will see all the information about each and every candidate from all the districts uploaded and eventually other analysis added, from female candidates to counts per district.

“We worked very closely with the Electoral Commission in the past and were planning to do the same for this election but did not manage to do so in time. We will definitely do so in the coming weeks,” Prof. Lauri said.

“We see this as an ongoing project, which is why we kept the word in the website address. We hope he will approve of all we have done. We see it as a way to ensure that his work lives on.”