Pietro Ghedin's team went down 5-1 in the opening qualifier of the 2018 World Cup. The scoreline was 1-1 at the end of the first half and Malta had been putting up a creditable performance even when Scotland went ahead early in the second half.

But the Malta team unraveled following a controversial penalty and sending off in which Maltese defender Jonathan Caruana is not seen to make any contact with the Scottish striker.

The team did well in the first half but fell apart in the second owing to a number of factors, including repeated mistakes by the match officials, said Bjorn Vassallo, secretary of the Malta Football Association.

He said he did not let emotion take over, nor did he seek excuses, but the match control in the second half was worse than being hard on Malta, it was "scandalous".

The penalty decision by Ukrainian referee Yevhen Aranovski was universally criticised. The referee's decision cannot be reversed but sources said that once the official observer files his report and the FIFA sanctions against defender Caruana are issued, Malta may consider an appeal to reduce the punishment.

The Ukrainian referee may also not be assigned further internationals.

The decision, which came after Scotland scored a second goal - despite Maltese captain Andre Schembri laying on the ground injured - was also derided by some Scottish fans.

The Guardian said replays showed that Scotland should never have been awarded their penalty, which effectively changed the outcome of the game.

Sky said Scotland were awarded a penalty that even left the commentators perplexed.

Mail Online said there was disbelief at the circumstances of the penalty which finished Malta off.

“The striker missed it fair and square. Inexplicably, however, the ref awarded a spot kick for a pull by Caruana. There was no contact. None at all. The red card for the defender added insult to injury.” 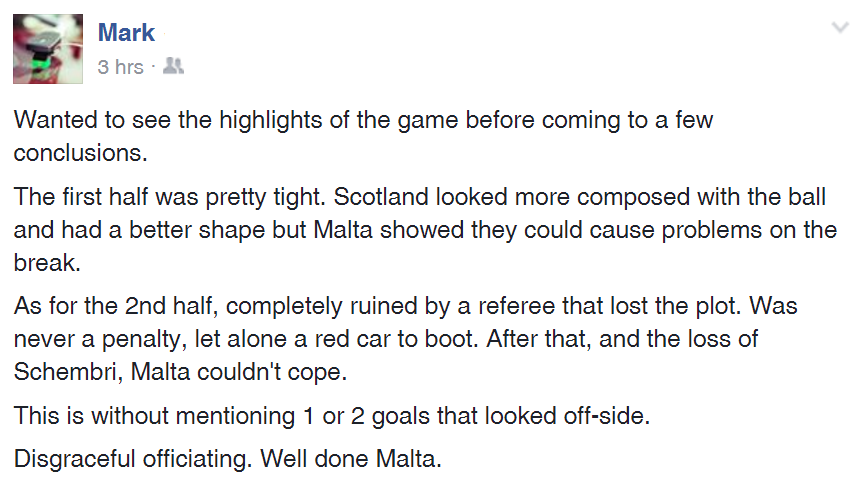