They come at night shouting and by sunrise they leave a trail of destruction with dead bodies of women, children and men whose only guilt is their Christian belief.

This is the harrowing experience of Fr Polycarp Lamma, a Catholic parish priest in the diocese of Jalingo, northeast of Nigeria, who has witnessed the ongoing persecution of Christians at the hands of Muslim herdsmen.

Fr Lamma was in Malta to raise awareness on these brutal killings, on the initiative of Aid to the Church in Need – a worldwide Pontifical Foundation focusing on assisting the Church in areas around the globe where Christians are oppressed and persecuted.

He recounts that the troubles started in 2014, when Fulani herdsmen, a semi-nomadic, pastoralist ethnic group living in the central regions of Nigeria, intensified their raids on farms belonging to Christians. 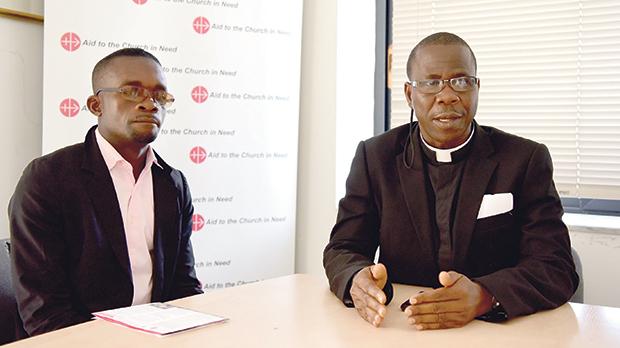 Fr Polycarp Lamma (right), who in June last year narrowly escaped death from Fulani Herdsmen by hiding under a pile of rubbish. Mr Solomon Yuhwam (left), a farmer, saved himself after pretending to be dead. Photo: Mark Zammit Cordina

Though such clashes over grazing land in the region known as the Middle Belt go back centuries, it was only in recent years that tensions escalated.

Born in 1971, Fr Lamma was ordained priest in 2007 and eventually became a parish priest.

“We lived in peace till 2014, when Fulani herdsmen committed a serious attack in the village. They burned everything down, including 43 religious centres, including the parish hall,” he recounted.

They burned everything down, including 43 religious centres, including the parish hall

He insisted that the attack was religiously motivated.

“When they attack they shout Allah u Akbar, and start shooting, but not before alerting Muslim farmers about their intention,” he added.

In June last year, on June 5, which happened to be his birthday, Fr Lamma had a close shave with death. “They surround you and the only way to avoid death is to try and escape or hide. Fortunately, when they use guns, we hear them coming and have a greater chance to flee.”

“I hid under a heap of rubbish and spent four hours concealed, until about 4.30am when the attack was over,” he told Times of Malta.

These attacks were not isolated incidents. It is estimated that thousands have already perished.

“Most of them are shot dead, but when the bullets run out they turn to machetes and even axes,” he recounted.

Solomon Yuhwam, a Catholic farmer of trees, who accompanied Fr Lamma during his short visit to Malta to share their experiences, bears the scar of such an attack on his right hand. He recounts that he only survived by a miracle, after throwing himself among the corpses of his fellow villagers who were not so lucky.

Fr Lamma accused the Nigerian authorities of turning a blind eye, including Nigerian President Muhammadu Buhari whom, he says, has never condemned these attacks.

“People are sometimes arrested but they are released within days,” he says.

Fr Lamma said his visit to Malta was part of his mission to raise global awareness about the ongoing persecution regardless of the consequences that he may face when he returns home.

“I am a priest, have no children, no wife. This is my mission and I trust God will protect me,” he added.