The top police officer responsible for probing the 17 Black case insisted yesterday he was not accountable to the public when asked about the apparent lack of progress in the investigation.

Replying to questions by the Times of Malta, the head of the police economic crimes unit, Ian Abdilla, told off the Times of Malta for chasing him down the road for answers. “Do not chase me”, he said when approached on exiting the court building in Valletta.

Mr Abdilla, who rose from the rank of police inspector to assistant commissioner between 2015 and 2017, was given a Financial Intelligence Analysis Unit report in spring identifying power station investor Yorgen Fenech as the owner of 17 Black.

The Sunday Times of Malta reported this month that police investigations would only turn to the Prime Minister’s chief of staff, Keith Schembri, and Tourism Minister Konrad Mizzi once formal confirmation from foreign jurisdictions had been obtained about who owned 17 Black.

The only person I am accountable to is my boss, the Police Commissioner

A leaked e-mail from Nexia BT said the Dubai-registered 17 Black would pay up to $2 million into Mr Schembri’s and Dr Mizzi’s once-secret offshore companies.

When it was pointed out that information about the case was of public interest, Mr Abdilla said he was not answerable to journalists or the public. “The only person I am accountable to is my boss, the Police Commissioner,” he said.

Mr Abdilla replied it was “none of your business” when asked whether magisterial assistance into the 17 Black investigation was requested in October only after it was obvious through questions sent to him that the Times of Malta would be publishing details about ownership and the failure by the police to request information from Latvia. The Daphne Project report on the 17 Black ownership was published last month. 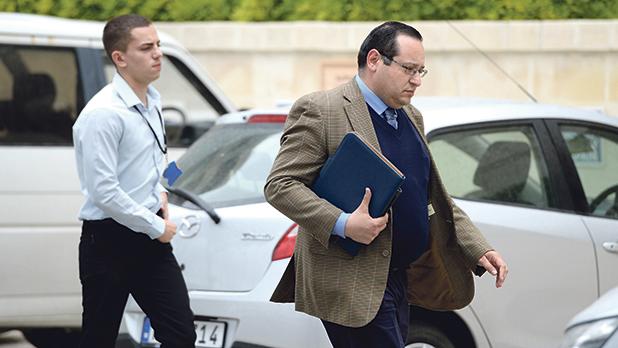 He insisted he could not answer any questions about the case, declining to even confirm if it was being actively investigated. He also declined to say if he had received instructions to go slow on the case.

The police are required by law to obtain information about cases independently from the FIAU, whose intelligence reports cannot be used as evidence in court.

When foreign jurisdictions, such as in the case of 17 Black, are involved, the police have to make formal requests for assistance to the countries involved through a procedure known as letters rogatory.

Although 17 Black is registered in Dubai, intelligence about the company’s ownership was received by the FIAU from Latvia. The Latvia FIU identified payments totalling $1.4 million from Azerbaijani national Rufat Baratzada, which were filtered through ABLV bank in Riga.

The bank has since been liquidated following claims of large-scale money laundering and a Latvian government official told the Times of Malta obtaining information from its administrators would be difficult.

Reuters correspondent Stephen Grey reported this week that the general prosecutor’s office and the Justice Ministry in Riga had not received any requests for information from the Malta police.