A cement mixing truck driver filmed in Birkirkara badly needs to brush up on his knowledge of road traffic signs.

The driver was caught on video on Saturday morning trying to squeeze the massive vehicle through an arch of the historic Wignacourt aqueducts, despite a road sign clearly forbidding trucks from using the low junction.

In the video, the truck driver turns without indicating and then stops at the traffic lights by the aqueduct arch.

The truck moves forward when the lights turn green, only to suddenly brake. Undeterred by the low arch, the truck again starts to inch forward before coming to a complete standstill, perhaps as the physical impossibility of the task begins to dawn on the driver.

The Times of Malta reader who captured the moment on their car’s dashcam said that the manouevre had damaged the central corbel stone of the arch, but a Times of Malta photographer who visited the Birkirkara site could not find any evidence of damage. Ironically, the same could not be said of the arch to its left, which has been very visibly chipped.

The Wignacourt Aqueduct was built in the 17th century by the Knights of St John, who wanted a means of carrying water from Rabat to their new capital city, Valletta. Various parts of it are scheduled grade 1 national monuments and listed on the National Inventory of the Cultural Property of the Maltese Islands.

Times of Malta has forwarded a copy of the video to local road safety authorities.

Spotted something worth sharing? Get in touch on mynews@timesofmalta.com 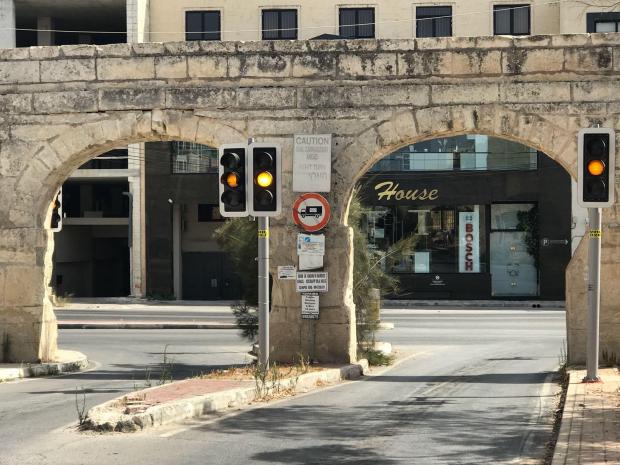 The sign forbids trucks from passing through the arches. Photo: Mark Zammit Cordina