Updated 1.31pm with another Delia reaction below

A number of Whatsapp messages were exchanged between Yorgen Fenech and Adrian Delia in 2019, despite the businessman having by then been outed as the owner of secret company 17 Black.

But the Nationalist leader dismissed claims on Saturday that he ever gave in to influence by Daphne Caruana Galizia’s murder suspect when confronted with the messages.

The WhatsApp messages were exchanged between the two in the first half of 2019 although it was always Fenech who initiated the chats.

During the same exchange, he asked the opposition leader if he was up for a casual meal.

“Good day to you. Thank you, I’ll ask Pierre (Portelli) to organise it,” Delia replied about the meal, though it is not known if it actually took place.

Delia has denied meeting Fenech post the revelations about 17 Black.

While also initially claiming to have had no communication with Fenech since his name was linked to 17 Black in November 2018, the opposition leader has since pulled back from this definitive stance by saying there was no communication “of relevance” between them in 2019.

Contacted on Saturday, Delia insisted he has never had any professional relationship with Fenech in his life.

“I have never had any friendship or any other formal relationship with him. I most certainly never received money/donations from Fenech as you seem to imply. I was certainly never influenced by him, or anyone else, either in politics or indeed ever in my entire life,” he said.

“I never succumbed to fear or favour and will certainly not do so now or in the future.” 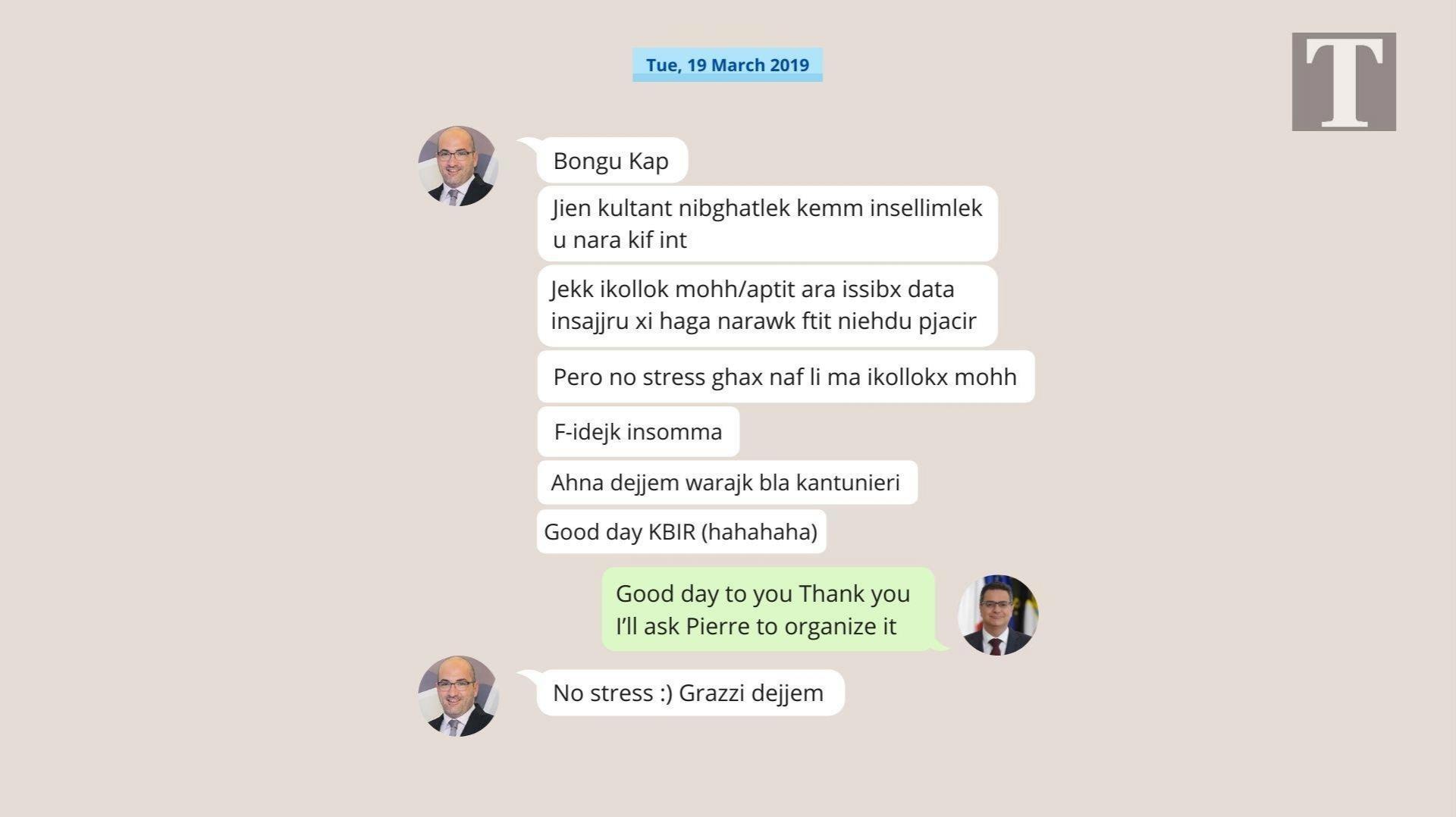 A mock-up of of the March 2019 messages exchanged between Fenech and Delia.

The PN leader said he wanted to express his concern about the “clear attempts” to divert attention from the real issues at play.

A magisterial inquiry is under way to gather evidence into claims that Fenech offered the party leadership €50,000 if David Casa failed to get elected in the May 2019 European Parliament elections.

The inquiry is also looking to establish if Delia’s former right-hand man Pierre Portelli was used as a go-between to channel up to €20,000 in cash monthly to the PN as part of efforts to derail Casa’s campaign.

Casa was a vocal anti-corruption critic, focusing much of his attention on 17 Black and the links between former OPM chief of staff Keith Schembri and former energy minister Konrad Mizzi.

It has since emerged that Schembri was a good friend of Fenech. Portelli is also known to have regularly been in touch with the business magnate though he strongly denies claims that money exchanged hands.

‘This is not on you chief’

Fenech appeared to console Delia in the afternoon of May 26, as the massive scale of the Nationalist Party’s defeat during the European elections became clearer and indications pointed towards Casa’s re-election.

“This is not on you chief,” Fenech said in a WhatsApp message to the opposition leader, who was facing calls for his resignation.

Delia did not react to the message.

One short exchange between Fenech and Delia showed a lighter side to their communication. 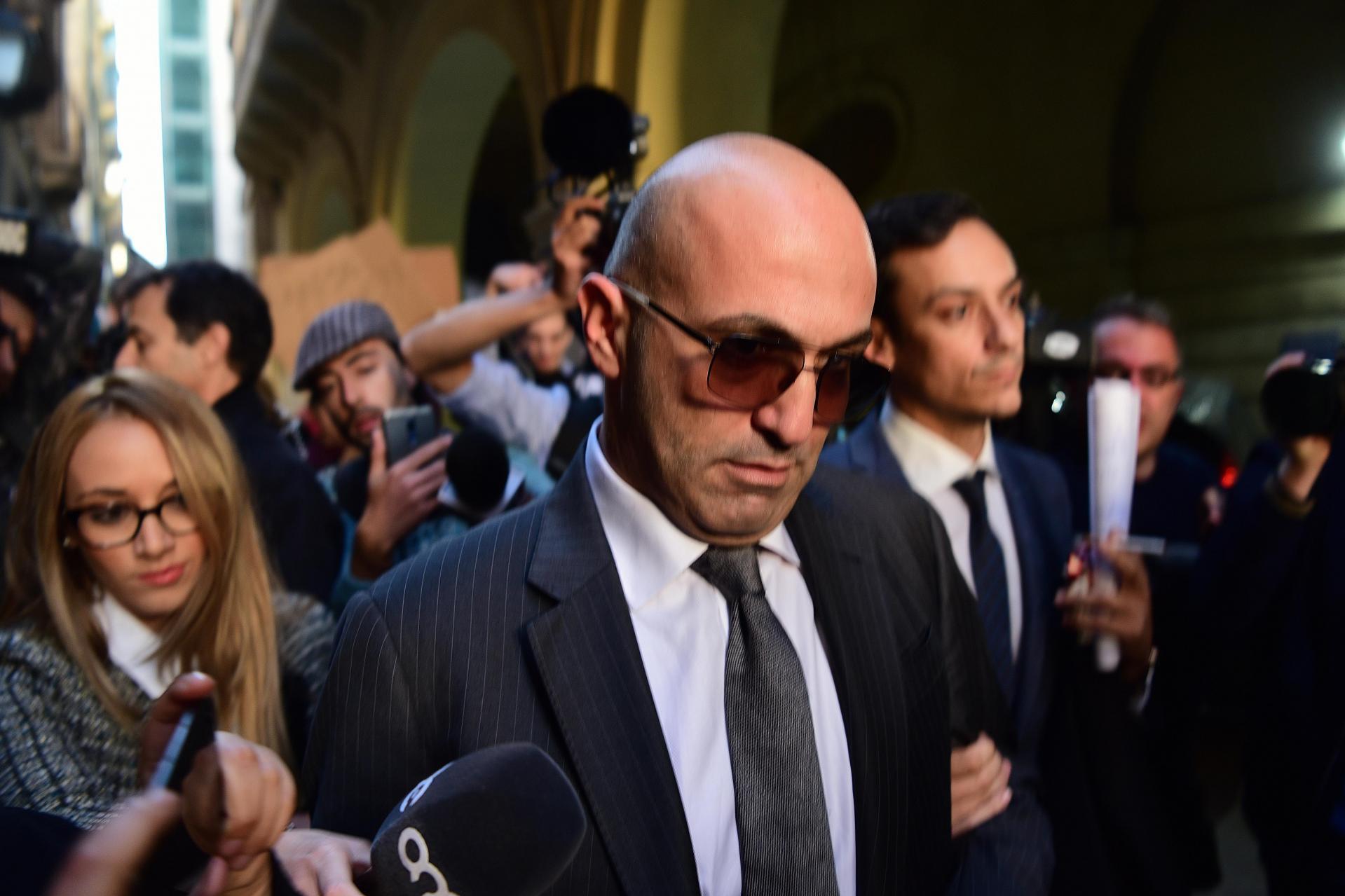 While on holiday in Austria in April 2019, Fenech sent the opposition leader a picture of a cafeteria called ‘Delia’s’.

“It is a high class cafeteria that will do you a lot of good ? hahaha,” Fenech answered.

Fenech also messaged the opposition leader at the beginning of last year, when Delia’s leadership was once again under pressure, this time over domestic abuse claims he vehemently denied during an acrimonious separation process.

On February 5, Fenech said: “I think about you a lot but I don’t bother you so as not to add to the list of people annoying you”.

In a follow-up message, Fenech said he was at Delia’s command and only a telephone call away.

Fenech said in the message he really wished to “do more”.

Delia had called a press conference on the day of the 17 Black revelations, during which he demanded Schembri’s and Mizzi’s resignations.

However, the party’s TV bulletin did not specifically make reference to Fenech’s ownership of 17 Black, which had been revealed by Times of Malta and Reuters.

The opposition leader merely referred to 17 Black’s owner as an “Electrogas director”, at no point uttering Fenech’s name or putting any focus on the man who was part of an apparent plan to pay up to €2 million into offshore structures secretly opened by the government officials.

Asked point blank on the day by Times of Malta whether the news exposed worrying proximity between members of the business community and politicians, Delia had deflected attention away from Fenech.

“We are also here, however, to sanction the government when it falters, to point out where it is wrong and to push for action, responsibility, resignation.”

A press release by the PN in January 2019 about a European Parliament probe into 17 Black also made no mention of Fenech.

*Most of the original messages were in Maltese or a mix of Maltese and English. They have been translated into English.

In a second reaction to the Times of Malta story, Delia insisted that his exchanges were nothing of relevance and the focus should be on Fenech's links with ministers. He also appeared to question the newspaper's sources, although he did not deny any part of the story.

"If Sunday Times of Malta has access to Fenech's mobile, then how about publishing thousands of exchanges that there must be between Fenech and the culprits in the numerous cases of corruption and the assassination of Daphne Caruana Galizia that they are implied in?" he asked.

"Why is this the only 'exchange' published?

"Why no exchanges between Mr Fenech, Joseph Muscat, Keith Schembri and Konrad Mizzi?"

The allegations are, he said, that Fenech 'cohorts' with ministers, that he is a childhood friend with Keith Schembri, that he controls Joseph 'Ix-Xiħ' Muscat and that there was an intimate relationship between Fenech and a Junior Minister.

"How about publishing chats related to these grave and certainly relevant allegations? rather than allow those keen on a diversion to focus on to “nothing of relevance” or untoward from my end."

He said The Sunday Times had not said where its information derived from, it did not even mention it was from a 'source'.

"I find this strange.

"But the crux of the matter, as far as I as Leader of the Nationalist Party am concerned, is this: The allegations made in my regard, a year ago, were precise: Yorgen Fenech offered 50,000 euros to me as PN leader to derail a PN candidate's re-election. I denied that flatly and took a solemn oath through an affidavit that I did not. Any investigation or inquiry will soon put that beyond any doubt.

"Today, The Sunday Times of Malta referred to 'mock up WhatsApp chats' between me and Yorgen Fenech.

From these 'mock up chats' it is said that Fenech 'pledged his support '.

"As leader of the second largest political party in Malta, I get thousands of messages a week from all types of people pledging their support, asking for meetings and giving ideas. That does not make me an acquaintance or friend of theirs.

"When the 17 Black story broke out, myself and the entire party went on overdrive talking about it every single day and asking for political responsibility of those who really and truly had a special relationship with Fenech.

"As I write this, a former Labour Minister and a former chief of Staff are enjoying the summer holidays despite being caught red handed having set up a venture to generate Euro 5,000 daily each from the proceeds of corrupt deals. And a former Prime Minister under whom all this heinous crime and corruption happened continues to escape justice.

"I, will on the other hand summon a Parliamentary Group this week to ensure the PN perseveres in its pursuit of truth and justice."