London’s Royal Academy’s 1997 exhibition Sensation was controversial for a number of reasons. Bad taste, explicit sexual content and general shock factor forced the Royal Academy to declare one of the 15 halls as an adult-only zone.

The mannequins of the Chapman brothers and the works of Sarah Lucas were too graphic in sexual content to warrant this cautionary action by the Academy. However, Sensation was one of the most successful collective exhibitions ever, drawing an audience that was intrigued much more by the controversy and backlash rather than by the artistic merit of the exhibits. 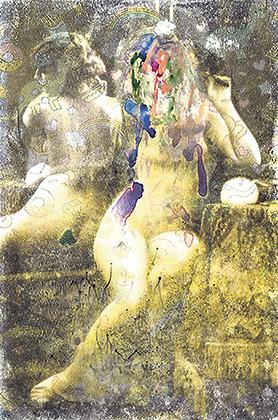 The Maltese Islands have always been ill at ease with any artistic display of sexually or erotically themed works. Religious and social ‘decorum’ have inhibited local artists from explicit representations of the human body, especially ones that highlight the sexual act.

Smudge is an organic artistic collaboration between four contemporary Maltese artists who, maybe somewhat along the lines of the notorious British exhibition, strive to dispel the myth of smuttiness that surrounds one of the seven basic functions that define us as living organisms.

This cycle of works is as intriguing as American artist Erich Fischl’s notorious work Bad Boy. The title of Fischl’s famous painting is suggestive of a loss of innocence. A mature and supine woman seductively summons the young boy to partake in the pleasures of the flesh as an initiation rite into adulthood.

Buttigieg uses coloured pencils to execute these 12 works on paper. The choice of this medium is intentional as the artist wants to convey a schoolboy’s graphic depiction of three sexual adventures by making use of what would be available in his hypothetical pencil case.

The nature of Buttigieg’s work somehow suggests that these are memories of a still hesitant and not wholly confident pubescent boys getting to grips with their burgeoning sexuality. The sketchy, playful and childlike pictorial mode of expression declares that these are essentially boys who are trying valiantly to cling to a carefree childhood. It is a thankless task as they cannot avoid developing into ordinary men, or ‘monsters’ with an unquenchable libido.

There is a Roy Lichtenstein comic strip pop appeal in the choice of primary colours, something that is disturbingly effective. The naïve abandon and the joy in the discovery of new pleasures by each of the male protagonists is not far removed from that of a child’s satisfaction in unwrapping and marveling at that long-desired toy.

Charles Balzan’s photos focus on the vulnerability and the immediacy of the model’s body. The skin is like the peel of an apple in which every pore and follicle can be distinguished. The two works, although snapped maybe a mere two seconds apart, are independent of each other.

Balzan is interested in the primitive and the instinctive. He strives to peel away the layers of sophistication and behavioural conditioning to release the basic animal instinct that has been concealed by centuries of enforced enlightenment and imposed life skills. The bulk of the body is overwhelming as it contorts to distort its normal proportions.

One is reminded of André Kertesz’s distorted photographs in which convex mirrors were used to elongate the human body towards a yield point, eviscerate it, release its components to recombine into new non-human formations.

However, Balzan’s approach is altogether different from that of Kertesz. Balzan uses photography as a means to an end, and he admits that he’s not influenced by the work of the great photographers.

Controversial French novelist Georges Bataille provides Balzan with a lot of fodder. Bataille’s short 1930 essay about the mouth proposes its function as an orifice of expression of rage, desperation and terror, just as Francis Bacon did in some of his paintings of grotesque, disfigured bodies. The vicious screaming mouths are extensions of the spinal cord as the neck is stretched back and teeth are bared. Any vestiges of humanity are negated and subjugated in favour of a bestial state that harks back to primeval origins. Liberation from the physical restraints of the human condition is redeeming as one reverts to an elemental and vulnerable carnality. In Bataille’s words, one turns “anguish into delight”.

These two works by Balzan steer away from the light and shadow sensuality of Lucien Clergue’s female non-frontal nudes. Clergue enhances the beauty and shape of the female body by enveloping it in veils of light and dark; Balzan focuses on the sweat-producing pores, the hair follicles, pimples and imperfections that celebrate its inherent beauty.

These are essentially surreal 21st century collages that evoke subliminally the collages of Hannah Hoch as well as those of Kurt Schwitters’ Merz Pictures. Schwitters believed in “the combination, for artistic purposes of all conceivable material” which was the philosophy behind the concept of Merz. Robert Rauschenberg’s collages with found images preceded his ‘combines’. These can be considered as a sculptural three dimensional development to the whole technique. 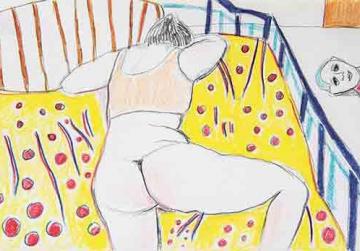 The Infant as Monster by Gabriel Buttigieg

Collage and juxtaposition are possible scenarios in 21st-century relationships – a profile pic intrigues; chat follows and views are exchanged; intimate secrets are revealed; further exploration of likes and dislikes via video chat leading to intimacy; resolution and bliss and farewell. And tomorrow, being another day, brings new opportunities and other profile pics and other collages. Falzon is painfully honest in his cynical view of contemporary society.

Smudge has introduced Sarah Chircop to the art-loving public. Her intentionally grainy photographs eloquently impart an elegiac old-world nuance. One finds comfort in the beauty of the medium itself as exploited by Chircop and in the ingredients that make up these very original compositions which are not ‘smudged’ by ulterior motives.

Intimacy and satisfaction can be found in the solitude of one’s own room. An unmade bed, unlike Tracey Emin’s famous one, is not always indicative of an amorous encounter. Chircop’s bed is a place of rest. There is poetic beauty in the ruffled fabrics.

In American photographer Minor White’s words “innocence of eye has a quality of its own. It means to see as a child sees, with freshness and acknowledgment of the wonder; it also means to see as an adult sees who has gone full circle and once again sees as a child – with freshness and an even deeper sense of wonder”. Chircop’s works suggest this, a mature comfort in the discovery of an alternative perspective.

One of the works in her ‘ThereNotThere’ series evokes Edward Weston’s famous nudes of his model, Charis Wilson, in a tight composition that is full of meaning. The slightly out-of-focus model in the foreground is reflected in a double-sided mirror that captures two different terrains of the foetal body.  Safety and comfort can be found by curling up in the foetal position which protects the soft sexual parts of the body from further distress. This particular Sarah Chircop work suggests a closing up, like a shell, for less exposure and for self-protection from the tribulations of the outside world. This eye-opening collective exhibition reaches out to a Maltese public that is still shackled by centuries-old inhibitions. The Maltese public apprehensively defends itself by attaching labels to almost anything under the sun and declaring such themes as taboo or as improper or in bad taste. The curator of Smudge, Justine Balzan Demajo, has admirably challenged these preconceptions and displayed the works of four young Maltese artists in the intimate space of Studio 87, Liesse Hill, Valletta. In her words “Smudge offers a different perspective that goes beyond the surface… the artists here are directly and indirectly confronting this taboo and are simultaneously allowing themselves to be exposed. Together, the works complement and contrast each other, each leaving their own smudge with the spectator.” After all, we are all smudged in one way or another.

Smudge, supported by Bupa Malta, People & Skin and M. Demajo (Wines & Spirits Ltd), is open at Studio 87, Liesse Hill, Valletta, Monday to Friday from 10am to 6pm until Friday, April 26.