This is a story set in Malta and Europe in the near future. In the form of a letter from a mother to her daughter Maddy, it shows a family trying to navigate the crisis in the region caused by a rapidly warming climate.

See previous chapters in the story and read a note by the story's author.

The first serious looting started in March of ’29.

The taps ran dry for three days, and a rumour swept through the socials that the largest Reverse Osmosis plant, turning seawater into fresh, had broken down. Government insisted that there was no problem, that there was more than enough water for everyone, but by that time government’s word wasn’t worth shit.

There was a rush at the supermarkets – at first for bottled water, but it didn’t stop there. We all shared, with growing worry, chaotic clips of looters running through the streets with covered faces and overflowing shopping trolleys.

It was all pretty disorganised, and only lasted a day or two that first time – people grabbing whatever they could, a few hunting shotguns brandished around the streets, some unlucky Africans beaten up for no apparent reason.

Things did calm back down for a while, but something had changed.

There was a new appreciation of the fragility of things, a sense that government control was precarious, liable to break down again at any moment.

People were scared, and an exodus began… expats first. It didn’t take much for them to take flight; it’s as if they’d all been waiting for a signal, like this was just the last straw, which wasn’t surprising, really.

There was a time, in the mid-2010s, when Malta was regularly voted one of the best countries for expats to live in; by 2020, because of governance issues, we were already in the bottom 10, and things had not been getting any better. You could even say that the expats’ slow-drip exodus had begun much earlier, before the riots of ’29 threw things into overdrive.

Within weeks, that trickle of spooked expats had turned into a flood; all the remote workers left first, and the gaming companies. Then the remaining financial services firms started laying people off and pulling out. It was fairly orderly at first, but an element of panic started to creep in, and pretty soon they just couldn’t get out fast enough.

The first Maltese started to go, too – the wealthy, those who already had some family abroad, and especially the young, who could clearly see that there would no longer be any jobs for them back home.

They were the lucky ones: that whole Schengen Area thing was still working then – they could just move to any other EU country, no questions asked.

Unrest started to grow. The government was held in widespread contempt for the way it was handling all these problems, or rather, not handling them. They seemed to be out of their depth, and everything they said or did amplified the general perception that they were powerless to stop the rot. 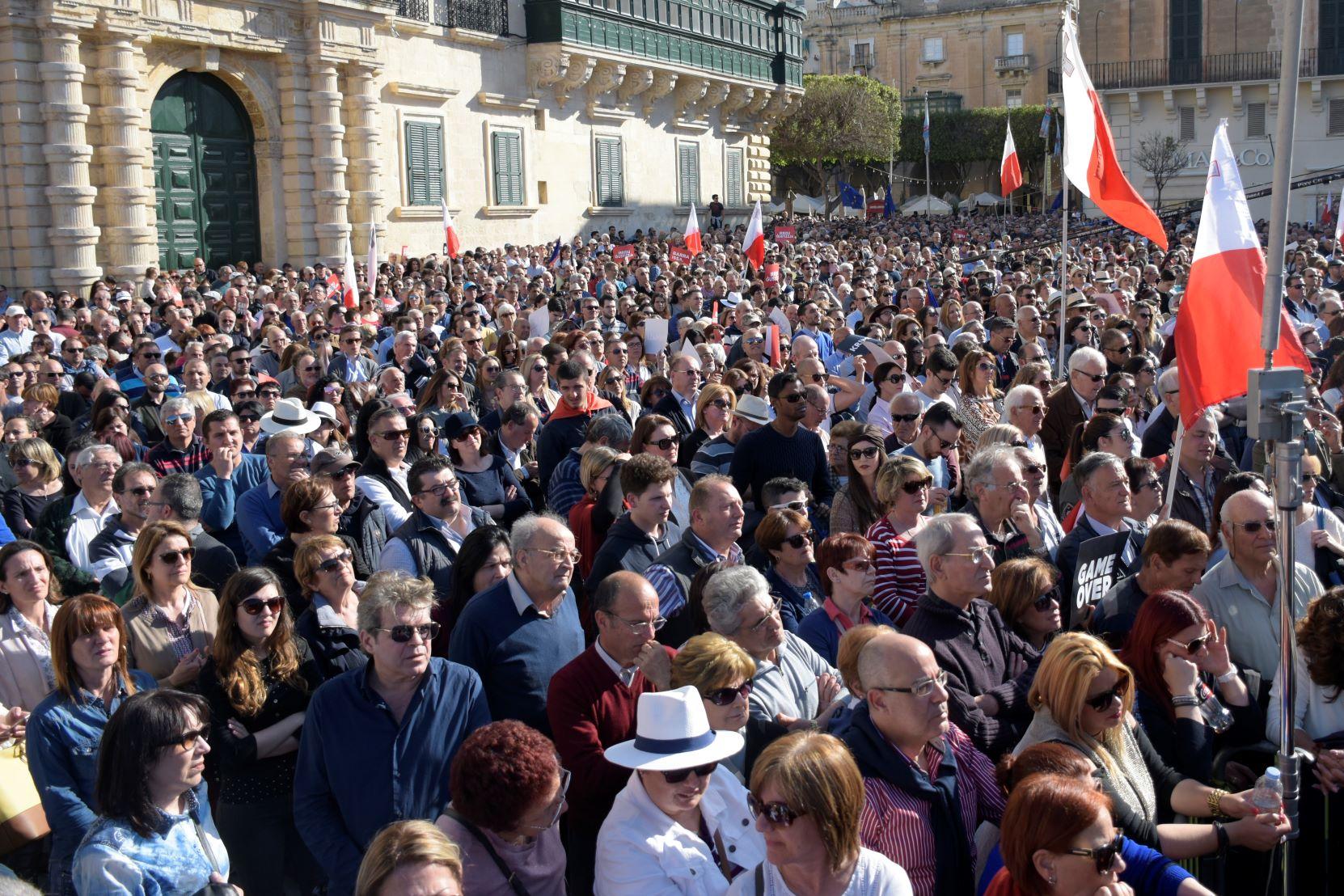 People took to the streets, and protests started being held every day in Valletta. Photo: Mark Zammit Cordina

When they suddenly introduced panicky restrictions on the amount of money that could be withdrawn from banks, people took to the streets, and protests started being held every day in Valletta. A new low was reached when the police opened fire on one of these crowds “in self-defence” and killed four people. That made the public mood even more toxic; the opposition declared the government illegitimate and instructed people to defy or ignore it. Most people happily did so.

There also followed a number of attacks on uniformed police and army personnel, many of whom promptly hid their uniforms away and disappeared into the general population.

If this political near collapse wasn’t enough, the economy started to break down too.

Tourism, which had been suffering already, dried up almost completely. The police shootings, the mass protests and the expat exodus made the international news. It all got linked to the Libya migrants story, with interviews of frazzled people getting off planes and boats, and that was pretty much that with regard to tourists. They just stopped coming: who wants to holiday on a ‘dying island’, baking in unpleasant 40°C plus heat for much of the summer, when everybody else seems desperate to get away from it?

A few years earlier Malta had been brash and confident

The loss of earnings from the international companies set up here, the loss of the expats, and the end of the tourism industry tipped the country over the edge.

We needed to buy all our necessities from overseas – including nearly all of our food and natural gas, which we relied on not only for energy, but also to produce most of our drinking water besides everything else.

This hadn’t been much of a problem before – the country could afford it. We were selling lots of services to the rest of the world – financial services, insurance, gaming, software, tourism. And we hosted lots of remote workers who were employed with international companies but who were based here and spent their income on the island.

Once these people suddenly jumped ship, when the international companies left and the tourists stopped coming, there was simply not enough money coming into the country.

With no natural resources, little competitive manufacturing, and the world no longer interested in our services, things just didn’t add up anymore. We still needed to buy our food, energy and water from overseas, but now we had no money coming in to pay for it.

Now the country was haemorrhaging cash and spiralling out of control. Fast.

Part four of We are not angry enough will appear on Tuesday, January 25. Click here for a note from the author.

Read previous chapters in the story.