While the paper invitations at the Gagosian in Rome, Italy, are getting thicker and thicker, the art is getting flimsier and flimsier by the day.

It’s way too easy to poke fun at contemporary art these days. Artists know it, so they make sure to be ahead of the game by striking an ironic pose.

The real fools are the gallerists and the collectors, not the artists themselves. The winner is not even the wittiest humourist. It’s the quickest.

Even so, he doesn’t consider himself an ironist. He swears his art is damn serious, but you suspect his statements are part of the game.

After all, he was the one who, in 2006, vanished from New York, leaving no trace of his plans or whereabouts.

He then resurfaced weeks later at the Royal Academy of Arts in Copenhagen to give a lecture on his own disappearance.

And here I am, standing in the large oval room of the Gagosian, eavesdropping on the bull the gallerina is telling two collectors.

Apparently, Golia’s Intermission Paintings is a by-product of a sculptural performance trilogy called Comedy of Craft.

For the first act of this performance series, Golia made an exact-scale replica of George Washington’s nose from Mount Rushmore in South Dakota.

He carved the nose in foam block – polyurethane foam being such a fashionable material in contemporary art nowadays.

I think art should be evocative and not descriptive

In the second act, students from New Orleans created a plaster mould from the foam replica. In the third act, a bronze cast will be made from the plaster mould. “We can only speculate on the link to Gogol’s famous story The Nose, a satirical look at the castration complex...” the gallery-owner says emphatically. I roll my eyes.

Name-dropping Gogol aside, this is what the most high-end art gallery in all of Rome has to offer us: offcuts. Very expensive offcuts.

Golia took them from the initial phase of the Washington nose, embedded them in a layer of polymer and painted them with iridescent nano-pigments.

“The same pigment used in security ink for marking bank notes”, specifies the gallerist in an allusive voice, as if it’s up to us to find the mysterious connection between money and the work on show. 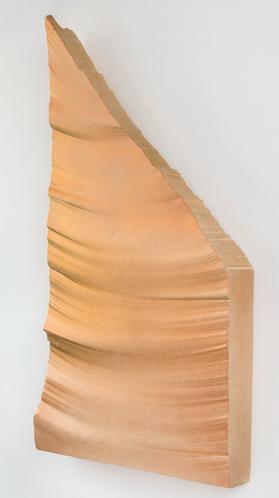 If anything, the problem is that the connection is way too clear.

Then there is the recession, which we might forget about entirely on entering this glamorous contemporary art temple, tucked in the posh Barberini area.

These guys might not be suffering the recession in the same way as others.

But they know damn well there are some individuals who would sell their grandmothers to get their hands on a handkerchief covered in Kurt Cobain’s s not.

Now, Golia is well past the 27 mark, and the contemporary art world certainly isn’t as popular as the music industry.

But the rule to not throw anything away, which we learned from our grandmothers force-feeding us pasta with ham and béchamel, is true now more than ever.

And this is clear not only from the works in the oval room, but also from a tiny model called Comedy of Craft, exhibited at the entrance.

This small model shows the curatorial set-up of the exhibition at the Gagosian. It is a cute little model, so why keep it for yourself when you can sell that too?

The thing is, that in contemporary art you can justify pretty much everything.

I’m sure that if I were to go to Golia’s studio, he would enlighten me about how this series of work is all about revealing the process behind the craft, tackling the essence of an exhibition set-up, or something along these lines.

In an interview, the artist once said the work should include as little information as possible.

“I think it works only if the viewer has space to expand what is significant. I think art should be evocative and not descriptive.”

In that, he succeeds. His Intermission Paintings are irregular slabs of polyurethane foam which, from a distance, look like glittering stones.

These slabs are iridescent and they change colours according to your position and the light. They do evoke.

For example, they reminded me of a souvenir I bought in the Republic of San Marino when I went there on a school trip.

The souvenir was made of a peculiar, sugary-looking stone that would change colour with the heat. Golia’s works ooze the same attraction a kid might feel for a Sailor Moon sceptre.

Then, as always happens, different viewers will see different things according to their experiences. The rippled surface of the slabs might remind an adventurer of the desert.

It might remind the sailor of gentle waves, the lover of rumpled sheets, the geologist of rare fossils. A baker will see moulds for biscuits; a fashion designer will see elegant fabrics.

To a make-up artist, they will be big blocks of eye shadow; to an old lady, a gigantography of the saggy skin on her thighs.

But Golia is from Naples and we all know what it is that his mother will see: “Good boy, he hasn’t thrown away anything!”

Intermission Paintings runs until July 30 at the Gagosian, Rome.