The bombs that fell on the Mosta Dome during World War II missed some boys by mere metres – because Frankie Calleja and his friends were up in the church belfry watching dogfights at the time, he tells Jennifer Grech on the 75th anniversary of the wartime ‘miracle’.

It could be called a double miracle. A group of daredevil teenagers had climbed up to one of the belfries of the Mosta church to get a better view of the dogfights when Luftwaffe bombers released their load directly above them.

One of them pierced the dome and crashed to the floor below, where 300 people were praying together. Miraculously, the bomb failed to explode.

But according to the historical account, the church was hit by two other bombs, both of which also failed to go off. And one of them deflected off the very belfry where Frankie Calleja, then 14 years old, was perched, along with a group of his equally mischievous friends.

At the time, Mosta was in the direct flight path of German bombers heading to or retreating from the RAF base in Ta’ Qali. As a result, the town was heavily bombed in the first four months of 1942, with the count of civilian casualties high. April 9 was a particularly bad day for enemy raids.

But that did not prevent the band of teenagers without a care (or fear) in the world from deciding to climb the belfry to watch aircraft engage in dogfights.

“The sky was full of swirling bombers,” the 89-year-old Mr Calleja recalls, looking at photos he took from the belfry that day.

“To us boys, it was all an adventure.

“We had become accustomed to the raids. As soon as the air-raid sirens went off, we would run into the fields, looking at the sky and expecting to see a German plane at any minute.

“The sky would be in flames. We used to love to watch the planes fighting – some cartwheeled down, leaving a trail like a comet and making a tremendous screaming sound.”

On the day that the boys climbed the belfry, at around 4.40pm, Eucharistic Adoration was being held in the church below. 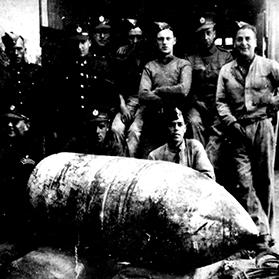 Members of the bomb disposal unit with the 500kg bomb that penetrated the dome on April 9, 1942, but failed to explode. Photo from the collection of Maria Vella

“The first bomb gave us a big fright – falling exactly where we were. It did not explode, and only the belfry and frontispiece were slightly damaged.”

A second one hit the church soon after, also failing to detonate.

Then the third bomb – a 500 kilogramme high explosive ordnance – made a hole in the Mosta Dome and fell where nearly 300 people were praying.

“They quickly left their chairs and sought shelter at the sides of the church,” Mr Calleja continues. “God answered their prayers, and a great miracle happened that day.”

Half an hour later, just as the parishioners were pouring out of the church, another two enemy planes were heading to Mosta from the direction of Naxxar, and barrage balloons – used to counter low-level attacks – were deployed.

“Whether the planes were actually hit or not, nobody knows… They changed tack and flew to Salina,” Mr Calleja recalls.

The disposal of the unexploded bomb from inside the church is logged in the official War Diary of the Royal Engineers Bomb Disposal Section. For disposal personnel it was no miracle – just a routine job during a period when bombs rained down on the island day after day.

That day, however, time in Malta seemed to stop, as the whole nation felt a sense of both shock and awe. A German raid intended to cause utter destruction ended in celebration, as 300 lives were saved in what has become one of the most popular stories from World War II.

Not all were so lucky

“Thinking back on it now, the scenes we saw that month were very much like Hiroshima. A whole block of houses between Ta’ Qali and Mosta was completely flattened,” recalls Mr Calleja. I can still remember the smell of a bombed house, like wet plaster and damp wood.”

Nearly 1,500 civilians were killed in the air raids during that period and thousands more injured. “It is a miracle the whole nation was not lost,” he says.

But for Frankie and his friends, it was a time of excitement.

“I was very naughty and used to enjoy going out to crash sites in nearby fields,” he recalls with a giggle.

He and his friends would rush out to collect items from downed planes – coins, suits, rifles, “until police or soldiers kicked us out of the area”.

However reckless that was, it is hard not to be amazed by his ingenuity and determination. “Of course, I knew nothing then about unstable fuses that could blow a hand off even if the main bomb didn’t activate.”

Mr Calleja remembers that not far away was an anti-aircraft battery.

“There was a guard with a rifle at the gate, but all he guarded was the troops’ living quarters, not the guns themselves, which were in emplacements a good distance away. It was easy to sneak up and have a close look at them.

“Any genuine saboteur could have had a field day.”

More than 14,000 bombs were dropped on Malta during the war, with at least 30,000 buildings destroyed – but the Mosta Rotunda escaped unscathed.  As the worst of the war passed for Malta and the enemy concentrated on other arenas, the terrible air raids lingered on for many in the form of nightmares and anxious flashbacks.

But for Mr Calleja, this meant “no more shrapnel or bombs to collect”.

There were other things to do, though. “The damage was gradually patched over, and life returned to normal – or as normal as could be in a war.”

On April 9, 1942, another church did not escape the fierce enemy bombing. By Can. Jonathan Farrugia

April of 1942 has etched its place in Maltese history as the worst month of the blitz, when, over 30 days, more than 6,700 tonnes of bombs were dropped on Malta. This was the month our country suffered its greatest losses during the war. 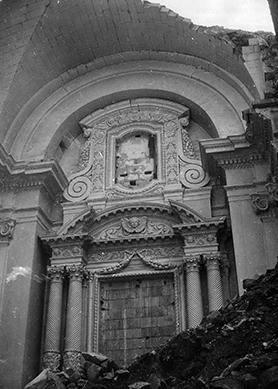 The badly damaged Mqabba church following the bombing, in which five people were killed.

The ninth of that month is remembered by the village of Mqabba as the worst day in its history. Until that day, even though a handful of villagers had lost their lives due to enemy action while at work in military areas, death had not yet visited the village.

On that day, however, things changed.

Easter Sunday in 1942 fell on April 5, and in Mqabba, the three days of Eucharistic adoration, known locally as il-Kwaranturi, were held up to the seventh. The next day, the church decorations started to be stacked back in their place and life continued as usual... till Thursday at 12.45pm.

The siren’s wail was heard, announcing the 2,042nd aerial attack on Malta. For an hour and a half, bombs rained over the island, especially in the areas around the harbour and the aerodrome in Luqa.

From interviews conducted years later with eyewitnesses, it became clear that no one was expecting such a fierce attack, especially on small villages such as Mqabba which boasted no military buildings.

Proof of the unpreparedness for such horror was the fact that the five victims on that fateful day were surprised on their way to the shelters: their deaths could have been avoided had they rushed to take refuge as soon as the siren was heard.

The bombing of Mqabba took about 15 minutes, and during that time, witnesses affirm that unceasing prayers were offered to Christ and Santa Maria by the terrified people and their parish priest as the explosions shook the very foundations of the village.

Judging by the savage bursts of the bombs, many suspected they would find serious damage, but none of them envisaged the chaos they were about to come across as they exited the shelters.

The first thing to greet those who had sought sanctuary in the underground rooms of the church square was the sight of the parish church missing its dome.

Two priests and the sacristan were seen rising from the debris covered in dust. They had been hiding in the belfry and survived the direct hit.

Another priest was seen digging his way through the fallen masonry with a couple of men, looking for the pyx containing the Blessed Sacrament, which that morning had been stored in a compartment in one of the main pillars of the church upon the suggestion of an altar boy. 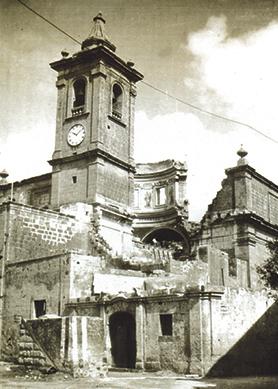 The Mqabba parish church in ruins.

The more courageous entered the church from the transept dedicated to Our Lady of the Rosary and saw more evidence of the damage: three of the evangelists painted in the pendants beneath the dome in 1896 were gone. Missing also were the main altar, made in 1910 in Naples and covered in marble, bronze and malachite, the presbyterium’s floor and three altars made of inlaid marble, the church organ, more paintings and the corpo santo containing the relics of St Innocentius, which had been brought from Rome in 1779. Further inspection revealed more losses.

After the first shock, people started looking for their relatives, and for some the worse part of the afternoon started.

Giovanna Busuttil and her daughters, Salvina and Maria, did not hurry enough to make it to the shelter and were in the square when one of the bombs landed there.

Salvina and her mother were found in its crater, covered in dust, dead. Maria was found on the roof of a nearby chapel, dead due to suffocation and with burnt lungs from the gas she had inhaled.

Lawrence Mangion was hit by a splinter in his back when he was descending into the shelter and died two days later of an internal haemorrhage.

Pauline Borg was in the narrow streets close to the church and was buried under falling masonry, dying the next day from her wounds, having lost both legs. 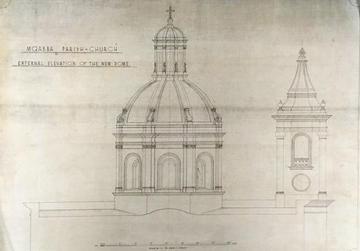 An illustration of the new dome, which was designed by Andrea Micallef.

No other raids before or after did such damage. After the war, the villagers did their best to move on.

The dome was rebuilt following the design of Andrea Micallef, and the new parish priest, Fr Gerald – the last parish priest native to Mqabba – saw to it that much of what was lost would be replaced.

This evening, a commemoration of that fateful day will be held at the parish church after the 6:30pm Mass. The event will include a public lecture on the role of the village during the war, together with a small exhibition of related photographs and artefacts brought to light for the first time after 75 years.