A thousand rags hang on the wooden beams of a disused church, scraps of mud-splattered colour draped above shelves of bones.

A fetid smell floats above the cracked skulls and shattered femurs.

Along the church’s wall I can still make out faded splats of blood. This is where children’s heads were smashed, says my guide.

It’s harrowing and horrific, yet bizarrely fascinating. I feel like a genocide voyeur, visiting Rwanda’s memorials with a cultural curiosity for the barbaric and brutal.

Why am I so intrigued? 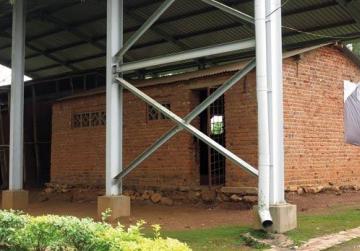 One of the many church memorials in Rwanda.

Twenty-one years ago, Rwanda suffered one of the worst genocides in world history.

Estimates suggest that a quarter to a third of the population was murdered or made homeless. The perpetrators were not the army or a crazed dictator.

They were everyday people. Spurred on by the national radio station, villagers killed villagers, hacking each other to death with machetes and clubs.

Now their remains lie in churches like this, the piled-up skeletons a haunting reminder of what happened between Hutus and Tutsis. 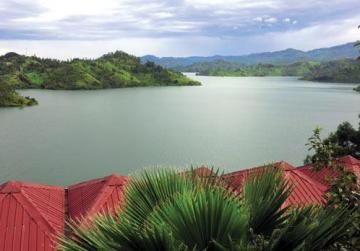 Lake Kivu is a sweeping expanse of water that separates Rwanda from the Democratic Republic of Congo.

My guide gestures to a nearby field: “About 50,000 are buried there, but we don't know exactly.” Nobody will ever know exactly. And that's part of the curiosity, many tourists like me trying to fathom a reasoning for the bloodshed.

Six other tourists are with me in the church, with another being sick outside.

These memorials have become the country’s premier tourist attraction, more than 50 of them dotting this tiny land of 1,000 hills.

Slipping away from the skulls, I find Rwanda effervescently pleasing on the eye.

The landscapes are lush and bountiful, verdant swirls snaking around cornfields and endemic forest.

Nothing is ever flat, every curve bringing another village with almost as many churches as houses.

Unlike the 20 other countries I’ve seen in Africa, there’s no sense of a colonial history.

It still feels like a place that’s far, far away from the rest of the world.

The remoteness intensifies along the shores of Lake Kivu, a sweeping expanse that separates Rwanda from the Democratic Republic of Congo.

I’ve got a tourist board brochure highlighting a five-day hiking trail that winds through the villages along the lake. It sounds a little energetic, so I find a motorbike and guide willing to take me to the first village.

The odd sign points to a genocide memorial but I decide to resist my curiosity.

Nobody speaks English at the village. Nor does anyone speak French, making my hastily purchased phrasebook futile.

Rwanda became a Belgium colony after World War I, yet there’s little exterior evidence of their presence.

A villager shouts to a fisherman, who shouts to a child, who runs off and returns with a teenage boy who’s able to translate.

Another round of messages brings another motorbike and I’m off on the trail again.

There’s no sense of a colonial history. It still feels like a place that is far, far away from the rest of the world

Every time I stop, at least 30 villagers come to stare and inspect. Nobody seems older than I am.

It’s as if a whole generation of people have disappeared, the elders lost to mass graves or affecting memories of what happened.

My guidebook says not to bring up the genocide. Yet what else to discuss?

It would be like visiting Auschwitz and not mentioning the Holocaust.

Language barriers prevent any real conservation, although there’s something intangible in every set of eyes.

I see resilience and a certain yearning. But the eyes are hardened, as if a sombre curtain has been drawn.

I keep riding, the motorbike slithering in the mud. The tyres slip every few 100 metres, before we cross a swamp and crash into a tree, a scene that seems to happen in slow motion. 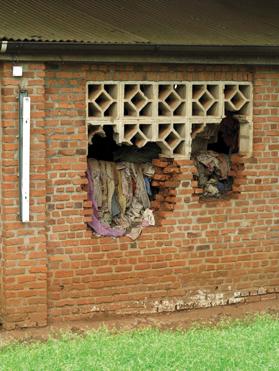 Perhaps it did happen in slow motion as nothing is damaged. Where is the road, I ask.

“This is road,” shouts the biker. All I can see is a field of ploughed mud.

If this is a road, then the genocide begins to make more sense.

Even now the world seems silent about what happened. But who has ever heard anything from such a rural place?

The first European to visit Rwanda arrived eight years after the Berlin Conference placed the country under German rule.

After 10 hours, I’ve covered 75 miles and arrive in the lakeside town of Kibuye. Besides the hostel is a marked mass grave.

There’s another two genocide memorials closer than the nearest restaurant.

I visit both, then another half a dozen near capital city Kigali. Each has been left untouched since 1994. By inspecting skulls you can determine cause of death: a bullet, a club to the head, a slicing machete blow above the eye socket.

Belongings of the murdered are piled together, yet there’s never enough names to match the number of bodies.

Whole families were wiped out, whole villagers in some instances.

When the head of the UN peacekeeping mission requested troops to prevent the carnage, the UN pulled out their entire mission.

So many are now just fragments of bone, their names disappearing with their lives. 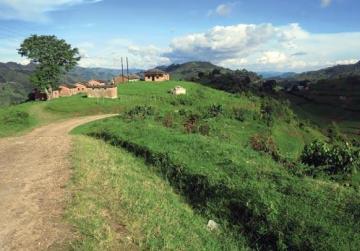 View along a rural road.

It’s the 21st anniversary of the genocide and various local community groups are also visiting the memorials.

Women wail in pain and have to be helped away, weak-legged. Others stand silent, a trail of tears dripping on to the bare concrete.

They move from the surreal to the too real and I’m also visibly weeping.

In Kigali I sense a new country and a fresh future. Every road is immaculately paved, each building glistens and there’s not a single scrap of rubbish.

Plastic bags are illegal in Rwanda and it's safe to walk the streets at night – a rarity for East Africa.

With resplendent green hills as a backdrop, Kigali and Rwanda's other towns seem reborn and revitalised, hiding the scars behind a veil of optimism.

Standing in Kigali’s heart is the national genocide memorial.

At the small countryside churches I heard guides narrating personal accounts, chronicling stories of children who were bludgeoned or villagers that vanished. The Kigali memorial provides a broader overview.

Colonial rule, ex-presidents, radio presenters, the UN, the French and Russian governments. A dozen sources are blamed, yet the information feels too clear-cut and simplistic.

It provokes more questions than answers.

When the genocide stopped, Rwanda went through a remarkable reconciliation.

The terms Hutu and Tutsi were outlawed, killers were brought to justice and Rwanda jumped into the 21st century.

That’s the official version, anyway, one that perhaps reigns true in the city. Yet I’m still as confused as ever. Why did this happen?

Rwanda’s exterior has a galvanising effect and there’s a wonderful tranquillity to travelling here. But like the eyes of the villagers I meet, there’s something unsaid and unseen that’s magnetises me to the country.

After a dozen memorials and shedding many tears, my genocide voyeurism is as strong as ever.

For as I delve deeper into the murky labyrinth of history, I constantly uncover more tales.

I feel like I should be saying sorry, although I don’t know who I’m saying sorry to, or for what.

Perhaps I just want to convince myself that the world won’t forget what happened.