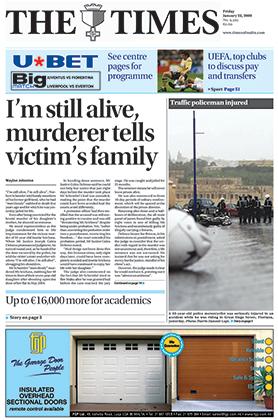 A 33-year-old traffic policeman is in critical condition after crashing into a lamp post with his service motorcycle yesterday morning.

Eyewitnesses said they saw Police Sergeant Malcolm Mifsud fly off his motorcycle and losing his helmet before hitting the ground after he skidded on the slippery tarmac and smashed into a nearby lamp post.

The policeman, who lives with his wife in Birkirkara and became a father just recently, was riding down Great Siege Street in Floriana, the hill leading to Hay Wharf from near the Hotel Phoenicia.

The motorbike fell on one side and slid downhill before stopping over 20 metres away from the police officer, not far from the Excelsior Hotel.Two plainclothes policemen happened to be passing by and immediately reported the accident and rushed to their colleague’s assistance.

The eyewitnesses said PS Mifsud was bleeding from the mouth when he was turned over by paramedics.

He was carefully carried on to a gurney and into an ambulance that rushed him to Mater Dei Hospital, where he was operated upon.

The police said last night that his condition was ‘stable’ and he was still in intensive care.

25 years ago - The Sunday Times 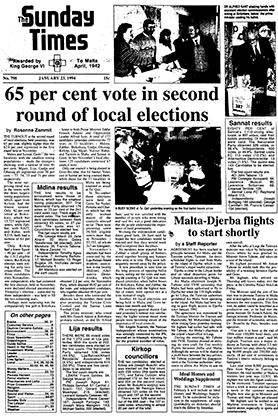 65 per cent vote in second round of local elections

The turnout in the second round of local elections, held yesterday, was 65 per cent, slightly higher than the 62.6 per cent registered in the first round held in November.

Mdina and Sannat – the two localities with the smallest voting populations – made the strongest showing, with a turnout of over 80 per cent. The most surprising trend was in the towns with the three largest voting populations which, apart from Kirkop, had the lowest turnout. Only 62 per cent voted at Birkirkara,  while Żabbar and Rabat both had a turnout of 63 per cent.

Agreement has been reached in principle between Air Malta and Tunisian airline, Tuninter, for direct scheduled flights to start from Malta to the island of Djerba.

Air Malta chairman Joseph N. Tabone told TVM yesterday that Malta had been authorised to fly to Djerba but when the UN flight embargo hit Libya, the Tunisian authorities prohibited Air Malta from operating to the island.

Half a century ago - Times of Malta 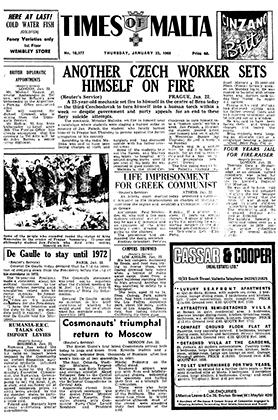 Mr Justice J. Flores, sitting in HM Criminal Court, yesterday sentenced Carmel Agius, 27, of Qormi, to two months’ imprisonment with hard labour after the jury returned a 7-2 verdict of guilty. Agius was found guilty of violent indecent assault against Janet Bastow. The incident took place in the early hours of June 30, 1968, at a bar in Buskett during the traditional Mnarja festivities.

As a reaction to the accused’s indecent behaviour, Mrs Bastow slapped him in the face and Agius slapped her back. When Mrs Bastow was examined by her doctor, she was suffering from shock and had bruises on her face. It resulted from the evidence that when the incident took place, Mrs Bastow, who is at present away from the island, was somewhat drunk.

Port workers back on the job

The port workers at the Deep Water Quay at Marsa returned to work yesterday morning after a two-day unethical strike. It is understood that the port workers have told the Port authorities that, unless their claim is met within a month, they will go out on strike again.