Bioinformatics is the interdisciplinary science of developing and applying computational techniques to gain biological insights. It underpins many important biological discoveries, and plays an increasingly important role due to the exponential explosion, availability, and wealth of molecular biology data.

Each one of us has a “code” which determines who we are and what we look like. This code, really a molecule called deoxyribonucleic acid or DNA for short, is made up of four different chemical components known as bases.

Human DNA consists of a sequence of three billion bases (a combination of the letters G, T, A and C). To give you an idea, if you had to print this DNA with font Times New Roman, size 12, you would need 1,206,980 single-sided A4 sheets (making up a paper stack close to 130m tall, higher than the Statue of Liberty!).  This DNA molecule is stored in a very compact form in almost all of the cells in your body. About 99.4 per cent of this code is identical for all humans, and only 0.6 per cent differentiates the author of this article from, say, Lionel Messi (much to Messi’s dismay, one imagines).

A genome is an organism’s complete set of DNA and it is now possible to sequence personal DNA for less than €1,000.  Small parts of this genome, called genes, encode for other molecular structures know as proteins. Proteins are crucial to life, as they are responsible for many of life’s function inside your body including, among other things, protection, cellular repair, transport, signalling, storage, and participating in chemical reactions.

Occasionally, mutations of bases in a gene may cause a protein to stop carrying out its function; and this may cause the carrier of the mutation to suffer from some disorder.  For example, in sickle cell anemia a mutation causes the red blood cells which carry oxygen to become rigid, sticky, and misshapen. Some cancers are also caused by harmful genetic mutations; e.g. five to 10 per cent of breast cancers are caused by mutations in the BRCA genes.

Bioinformatics is also pivotal in systems biology, where holistic relationships at different scales are investigated.  Another important area of study in bioinformatics is drug discovery; where the 3D shape of the protein is used to guide the search for “compatible” new drugs.  Biological Network Analysis is also part of bioinformatics; these could be the networks which model how proteins interact with each other; or how genes regulate one another.   Bioinformatics techniques are used in the examination of many biomedical images (e.g. CT scans, X-rays images or MRI). 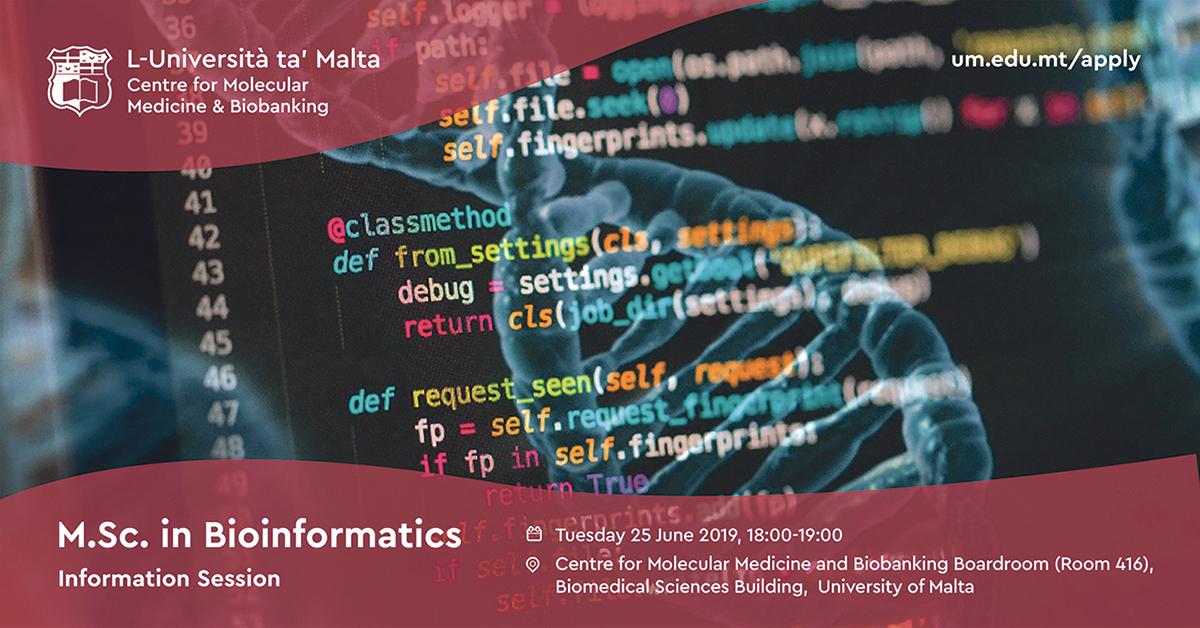 There are many tools in existence to analyse biological data, but some still need to be developed or improved by bioinformaticians.  Bioinformatics is not limited to humans, but plays an important role in other areas such as agriculture.

One of the key challenges in bioinformatics is not the computational aspect where computers are programmed to follow a set of instructions, but the limited biological knowledge; where one can find many exceptions.  Unlike abroad, there are little, local opportunities presently in bioinformatics; but this is bound to improve as we move more of the analysis described from in vivo (“within the living”) and in vitro (“within the glass”, or test tube) – to in silico (“within a computer chip”) and as we train future bioinformaticians.

The University of Malta is launching a new M.Sc. in Bioinformatics come October.  This is an interfaculty collaboration between the Department of Applied Biomedical Science, the Department of Computer Information Systems, the Department of Statistics & Operations Research, and the Centre for Molecular Medicine and Biobanking.  This course has both a taught component (with focus on molecular biology, computer programming, statistics, and bioinformatics) and a research project.

An information session on this programme will be held on Tuesday at 6pm in Room 416 at the Centre for Molecular Medicine and Biobanking (Biomedical Sciences Building).

Dr Jean-Paul Ebejer is a lecturer at the Centre for Molecular Medicine and Biobanking, at the University of Malta.  For further information  regarding the M.Sc. in Bioinformatics please contact him on  jean.p.ebejer@um.edu.mt.

• New research suggests that cells in the body are wired like computer chips to direct signals that instruct how they function. Unlike a fixed circuit board, however, cells can rapidly rewire their communication networks to change their behaviour. The discovery of this cell-wide web turns our understanding of how instructions spread around a cell on its head. It was thought that the various organs and structures inside a cell float around in an open sea called the cytoplasm. Signals that tell the cell what to do were thought to be transmitted in waves and the frequency of the waves was the crucial part of the message. Researchers at the University of Edinburgh found information is carried across a web of guide wires that transmit signals across tiny, nanoscale distances. It is the movement of charged molecules across these tiny distances that transmit information, just as in a computer microprocessor, the researchers say.

• What if scientists could manipulate your brain so that a traumatic memory lost its emotional power over your psyche? Researchers believe that a small structure in the brain could hold the keys to future therapeutic techniques for treating depression, anxiety, and PTSD, someday allowing clinicians to enhance positive memories or suppress negative ones. Inside our brains, a cashew-shaped structure called the hippocampus stores the sensory and emotional information that makes up memories, positive or negative ones. Now, in a new paper in Current Biology, a team of researchers have shown just how pliable memory is if you know which regions of the hippocampus to stimulate – which could someday enable personalised treatment for people haunted by particularly troubling memories.

• About 8% of the human DNA is made up of ancient viruses that used to infect us.

• In an experiment Harvard researchers were able to store 700 terabytes of data in a single gram of DNA.

• The world’s smallest test tube has a diameter 10,000 times narrower than a human hair.