On February 21, 2011, two Mirage F1 fighter jets armed to the teeth swooped in low over the island out of the blue and landed on a commercial runway at the airport.

As tourists were stretching their legs and retrieving luggage nearby, the Maltese authorities were scrambling to determine whether the bloody civil war that was unfolding in Libya was about to spill over onto the Gudja asphalt.

Two fighter pilots who had been instructed to bomb civilians in Benghazi had decided to defect from the Libyan regime and abscond with their planes mid-flight.

They headed to Malta to request political asylum.

Ten years since the incident, former prime minister Lawrence Gonzi recalls the heavy burden of responsibility and the delicate task of diplomacy that it imposed on the government at the time.

Having met with Muammar Gaddafi shortly before the ‘day of rage’ protests in Libya on February 17, Gonzi says he was intensely aware that the situation needed to be managed deftly.

“It was clear that we had a major crisis on our hands and it was also clear that the Libyan regime would be demanding the return of the pilots and the jets. The Libyan fleet wasn’t large and the two armed jets represented a significant loss,” Gonzi said.

After having wrapped up a cabinet meeting in the morning, he recalls getting the call from air traffic control.

“They told me the jets had flown low to avoid detection and landed without permission. They were parked on the main runway where tourists were landing,” he said.

“We, of course, had been monitoring the political situation in Libya and understood it to be deteriorating hour by hour. We knew that sooner rather than later Malta would begin to receive the fallout from the presence of the jets.”

The first quick decisions that needed to be made was whether to grant asylum to the pilots, and the second and more pressing matter was whether Malta would allow the jets to return to Libya.

“We decided to grant political asylum to the pilots immediately. They were given full military protection, whatever they needed.”

“They had taken an enormous risk and rightfully were fearing for the families they had left behind. It’s my understanding that the family of one of the pilots lived in the military barracks in Tripoli.” 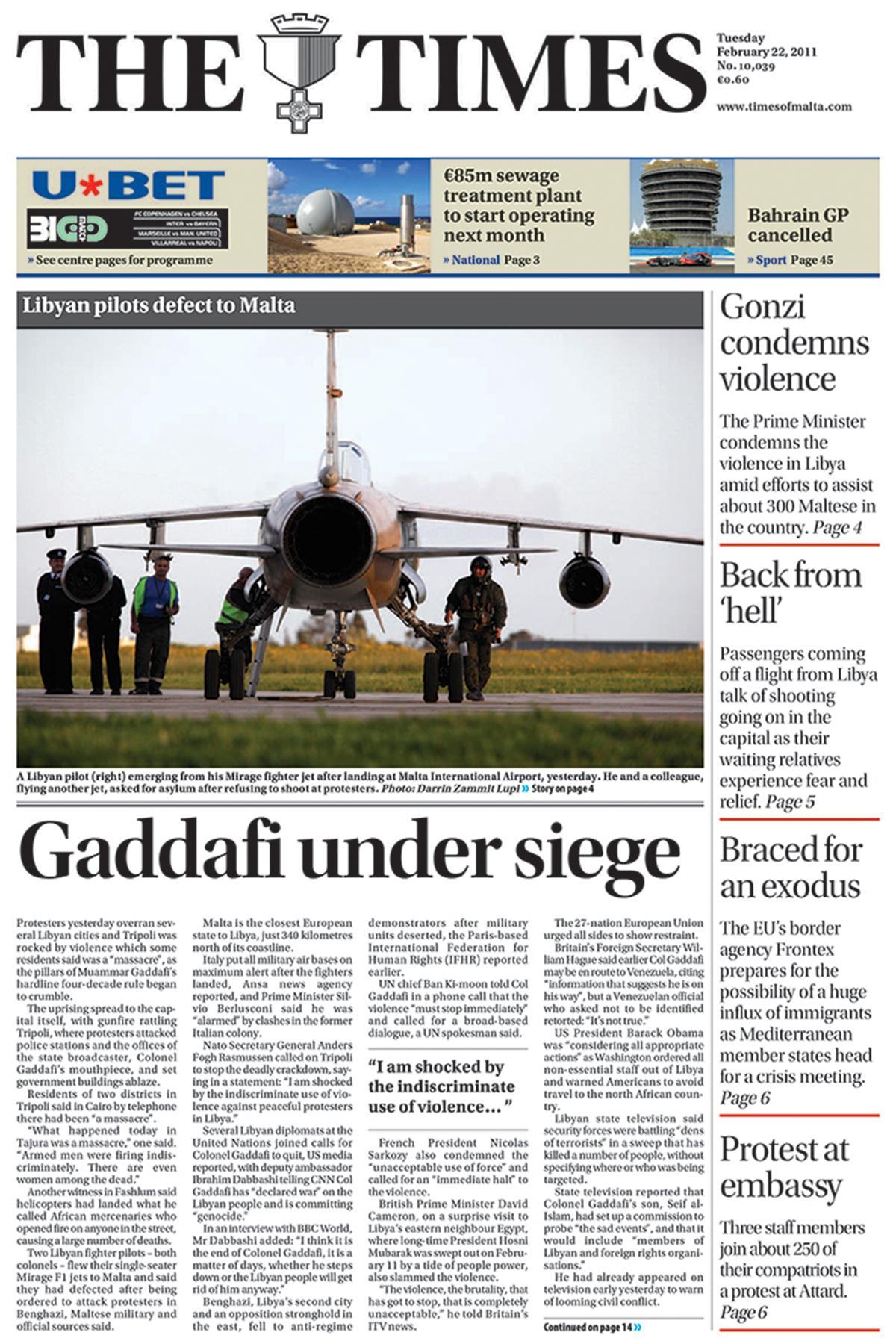 That same evening, the government was informed of a private plane that had left Tunisia and was requesting an emergency landing in Malta.

On the advice of the MSS and military officials, authorities requested a passenger list from the aircraft before giving instructions.

“We showed the passenger list to the two pilots and they told us it included flight officers and top military officials. Clearly, they were desperate to get the planes back and were going to attempt to do so,” Gonzi recalled.

“They told us they didn’t have fuel and we told them to turn back to Tunisia and land there.

“I realised at that moment, as the Libyan regime insisted on the return of the jets, that I had no intention of sending them back and allow Malta to become an accomplice to the violence taking place on Libyan soil by the Libyan regime against its own people.”

That evening Gonzi met then opposition leader Joseph Muscat to brief him. Muscat told him it was his decision to make but that they would back whatever the government decided.

“I went home that night and expected a call from the Libyan prime minister al-Baghdadi that never came. When I woke up the next morning I was resolved that our position would be not to return the planes.”

The government was not unanimous about the decision. But even as threats to Maltese citizens and assets in Libya began to roll in, Gonzi believes the right decision was made.

The country, he says, had proven capable of handling a situation that could have quickly turned sour.

“I saw it as a test of our moral rectitude. With our position as a neutral state, we could not remain with our mouths shut when faced with violence and injustice.

“We needed to stand up for our values and make it clear to the rest of the world that Malta stood for morality and democracy,” Gonzi said.

Former Times of Malta news editor Mark Micallef, who covered the Arab Spring on location, said the moment was a “turning point” in Malta’s position on the revolution.

“Up to that point our position was not really telegraphed to everyone and that event certainly changed the situation,” he said.

“Through this action Malta could no longer remain a neutral party.

“Looking back this was a very important moment because it galvanised the case some countries were making that the international community should intervene, because absent to this, there would be genocide,” Micallef added.

The euphoria of revolution had subsided, he said, and the past years had been extremely difficult for Libyans.

It would take significant time and energy for it to be in a good place again.

Despite this, Malta’s role should not be overlooked, Micallef said.

“Historically, it would be a mistake to forget an event like that where you had pilots who defected and abandoned their orders because they didn’t want to be a part of an attempt to bomb civilians,” he said.

“I would say the stand Malta took at the time made a significant positive difference to the revolutionaries and the island subsequently took an active role as a logistical hub in facilitating aid.”