The religious feasts in the Maltese islands have led to the production of fine street decorations in wood, papier-mâché (karta pesta) and cloth over the centuries. This year, because of the COVID-19 pandemic and since feasts are not being celebrated with the usual pomp, street decorations will be very limited or not displayed at all.

In the beginning of the 20th century, street decorations mainly consisted of poles with banners and wood containers with palm fronds and other tree branches. Nowadays, streets are beautifully decorated with statues, poles, banners and pavaljuni made of linen and other fabric with floral designs and hand painting on canvas.

These draperies are the fruit of another kind of decorations, those known as ‘tal-karti tat-tajr’. 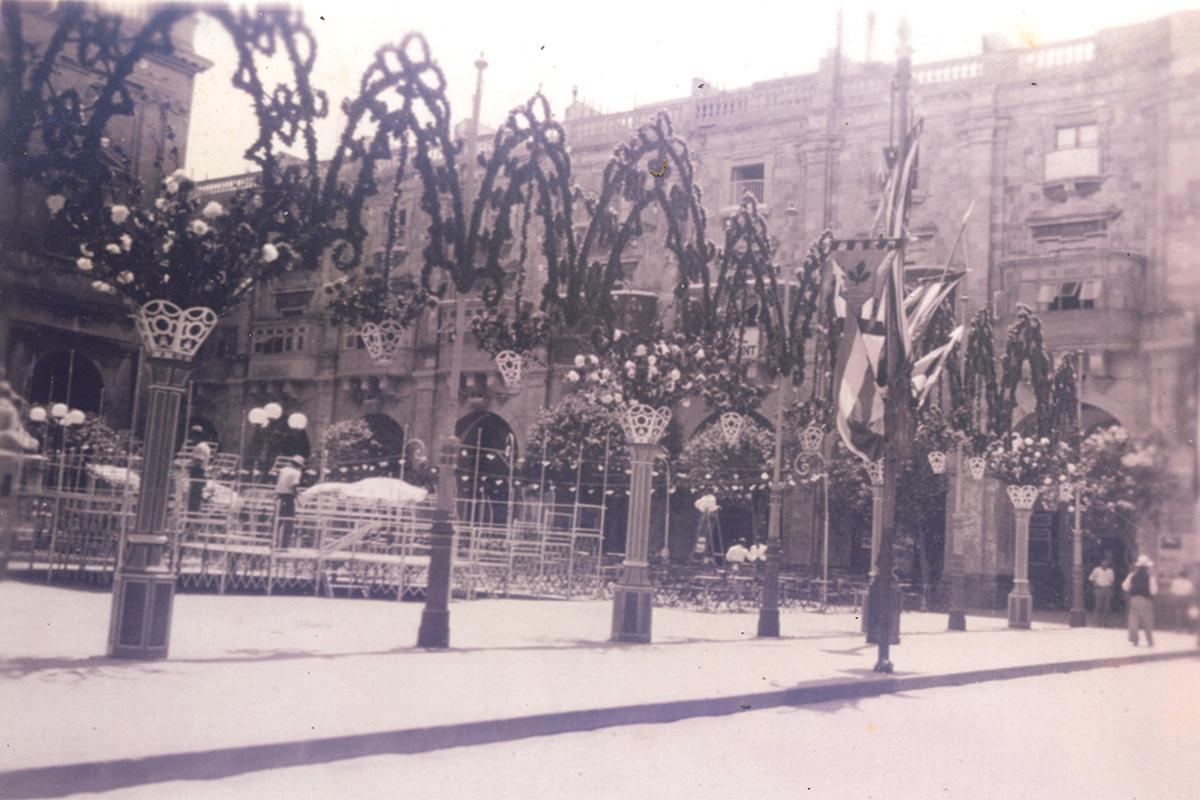 The karti tat-tajr decorations were introduced in Malta around the 1920s.

I remember once Republic Street (Kingsway) decorated with a canopy in the form of a trellis (kannizzata) made of bay leaves (weraq tar-rand) with chandeliers made of paper and wood hanging at each corner.

The karti tat-tajr decorations were only suitable for the summer feasts as they would get ruined with wind and rain. One of the drawbacks, or perhaps advantage, of these designs was that they were used only once since the material would fade in the sun. These decorations would, in fact, only be put in place three days before a feast. 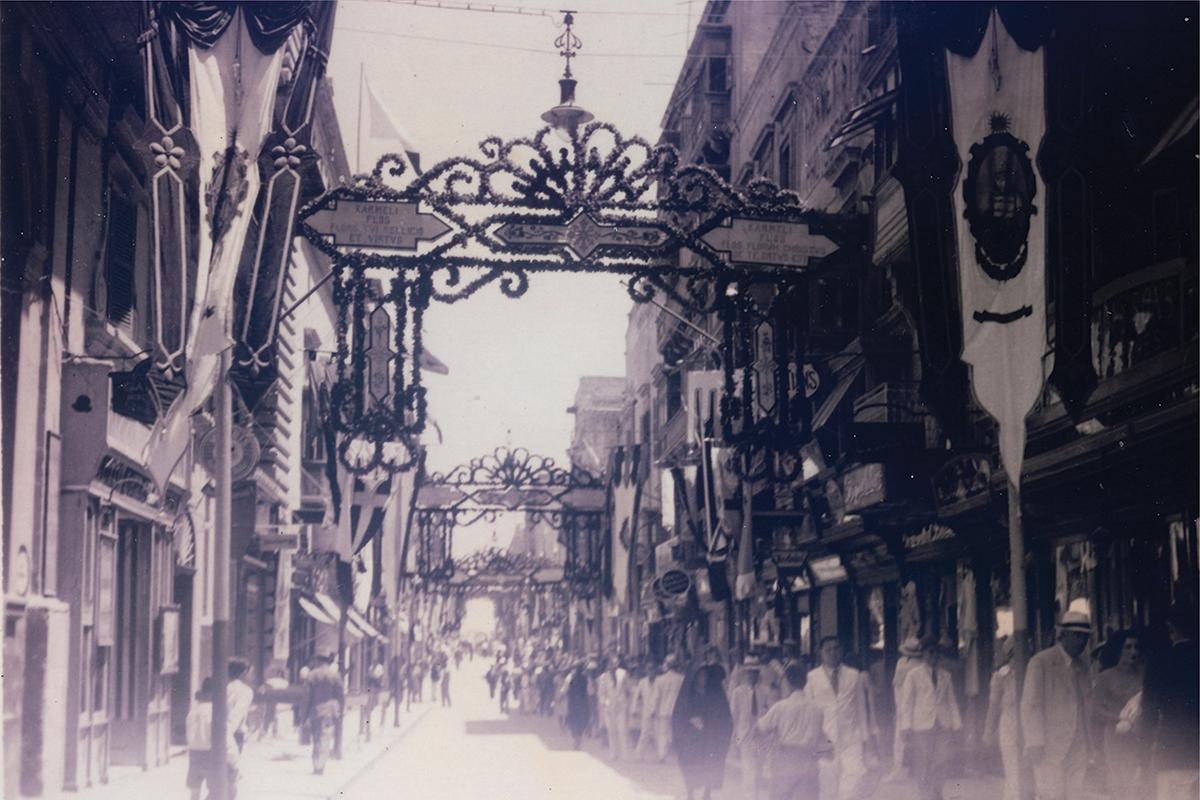 Made from light wood, these decorations were joined together with light-coloured paper used for kites (karti tat-tajr). The design was enlarged on brown paper to the actual size of the street width. Wood was cut to size according to the design and glued together.

Once the wood frame was ready, it would be covered with coloured paper, in a pleated way (bil-pjiegi) so that when one looked at the designs from street level, he or she would see the effect of something coming out of the design and with different shades.

Putting up these street decorations was a difficult task. At least 10 volunteers were needed to put up each one of them. These were mounted together in pieces with iron wire (fildiferru). Sometimes, these decorationswere sold to other parishes such as those of Stella Maris in Sliema and Our Lady of Victories in Mellieħa which celebrated their feasts later in the year.

Artist Emvin Cremona once told me that he really admired these decorations. In fact, he was very happy to learn that I had a number of photos of these decorations and he told me to keep them for future reference for history of art students. 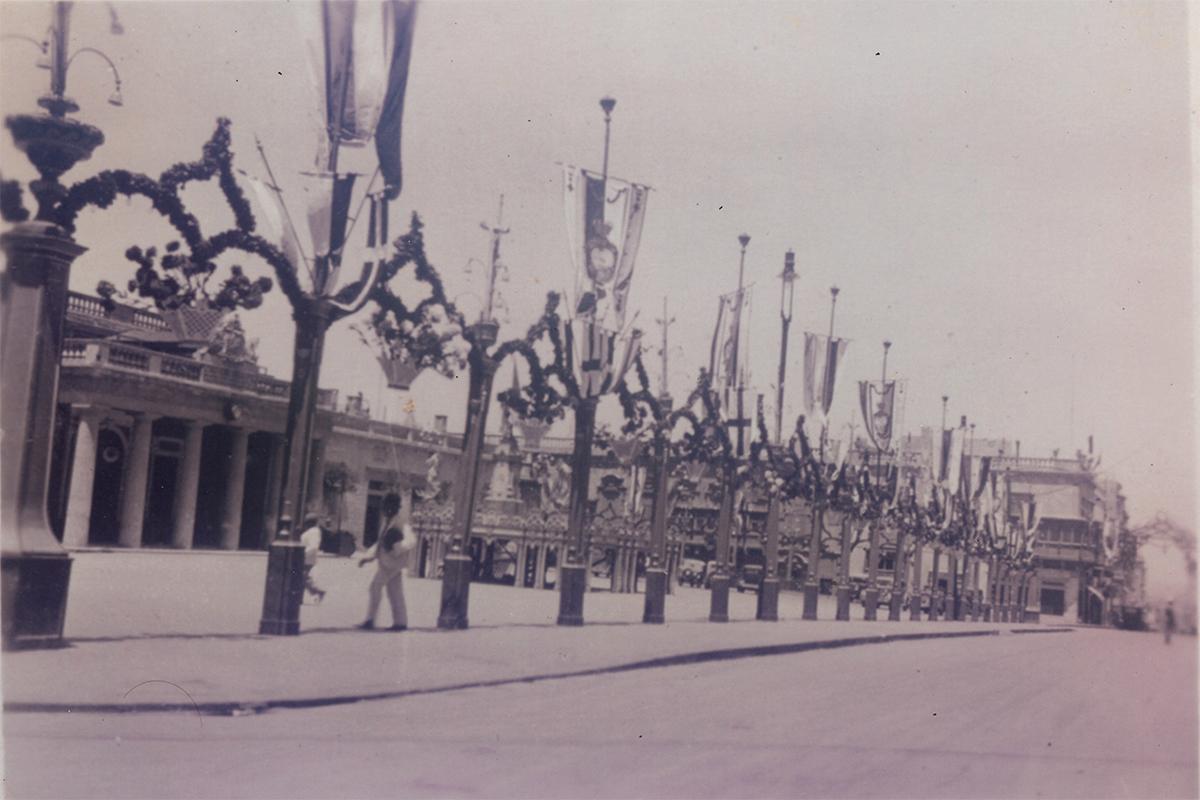 The decorations were notably made by the families Natoli, Axisa and the Carmelite Fathers, Fr Albert Mercieca, O.Carm and Fr Franco Falzon, O.Carm. The family Canavoux was the most renowned family for the the decorations for the feast of St Domenic.  In the 1960s, the designs of these decorations improved. Hand paintings were added to wood and paper, with Fr Karm Ferrante, being one of the pioneers of these artworks. Fibre was later added.

Feast enthusiasts stopped working on this kind of decorations between 1939 and 1946 because of World War II and started putting up the karti tat-tajr decorations again in 1947. They remained popular until 1981.

A sweet anecdote is that on July 15, 1938, while the faithful attended the Thanksgiving Mass and Te Deum at Our Lady of Mount Carmel parish in Valletta to commemorate the crowning of the titular painting by the Vatican, it rained lightly.

When the people walked out of church, their clothes got stained by the colour dripping from these paper works.

Street decorations are mostly works of art but, unfortunately, not everyone appreciates them. Many visit museums in Spain, Italy or France but are unaware that the Maltese churches and the local village decorations are as rich. 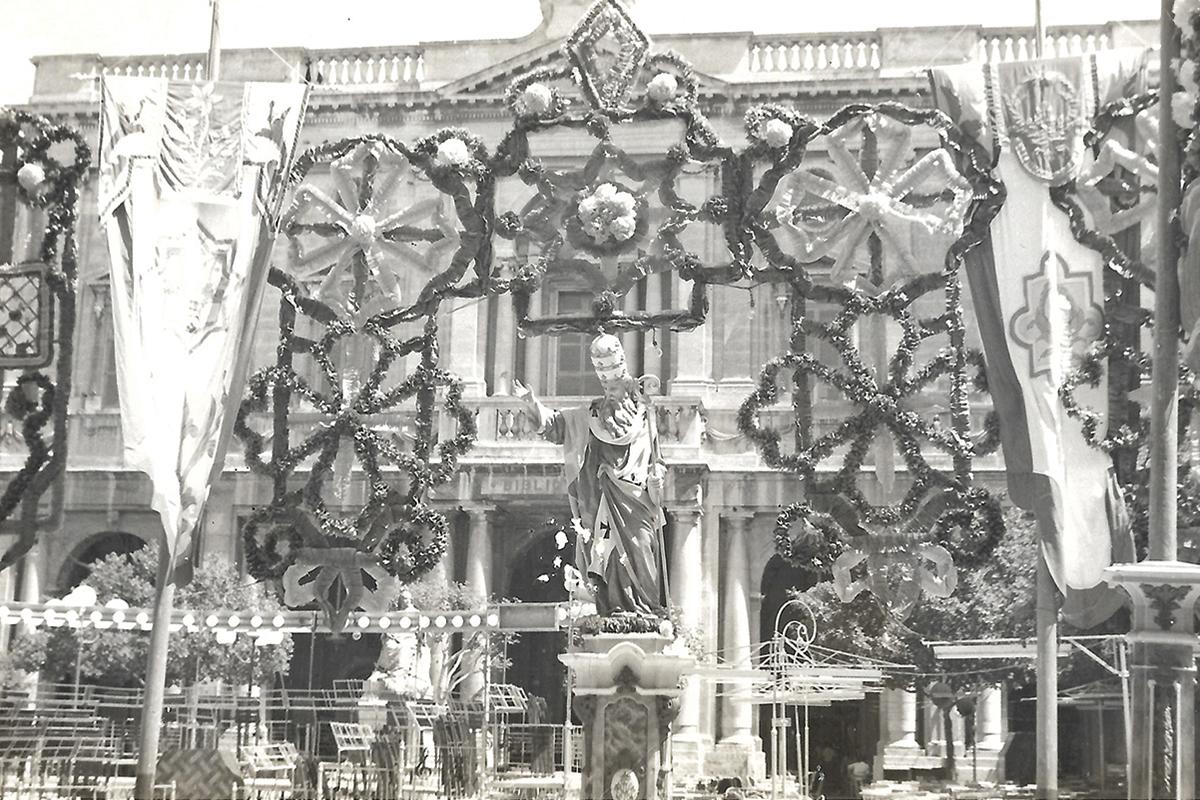 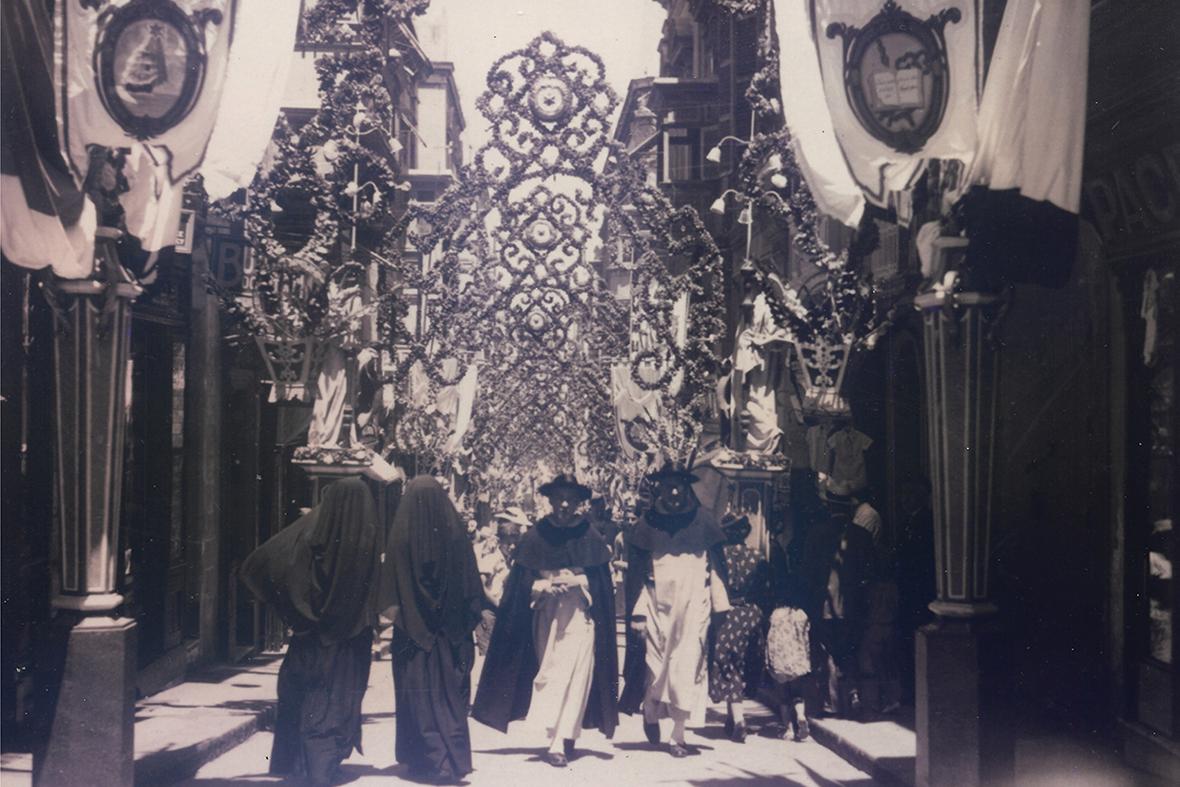 Locals walking underneath the paper decorations in Old Theatre Street, Valletta, in 1923. 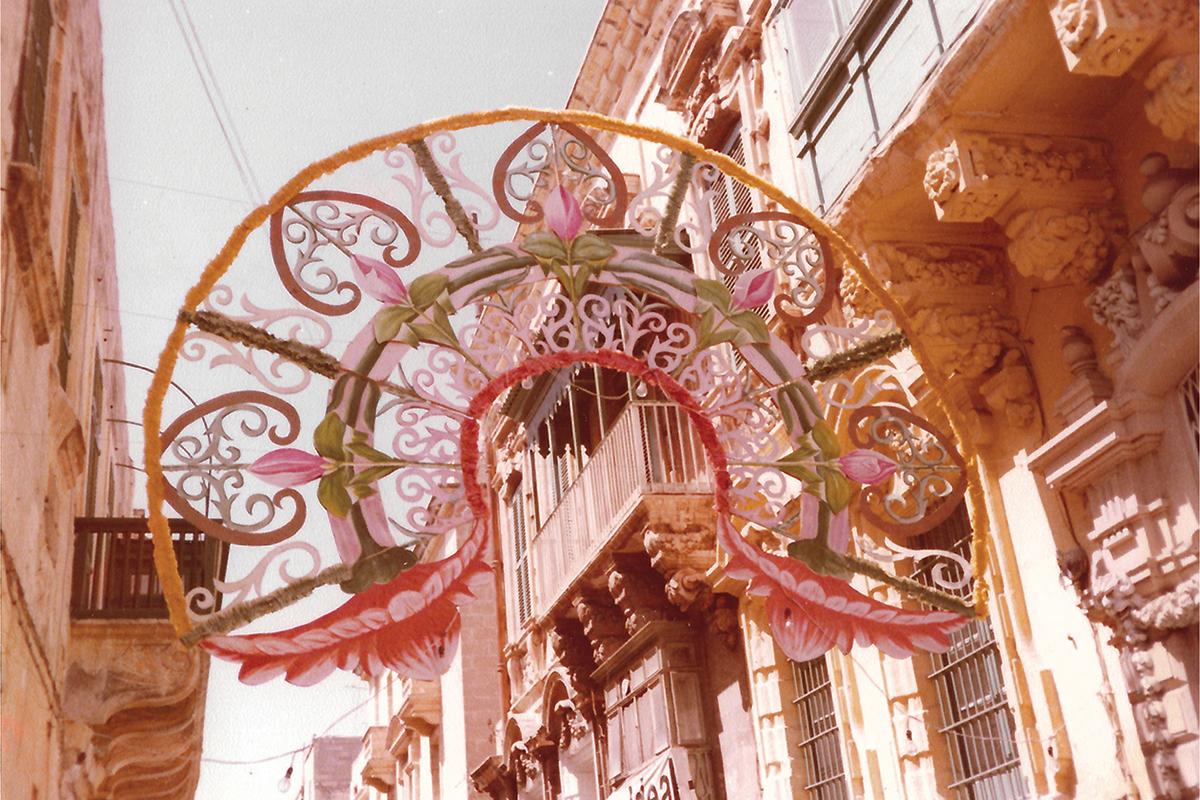 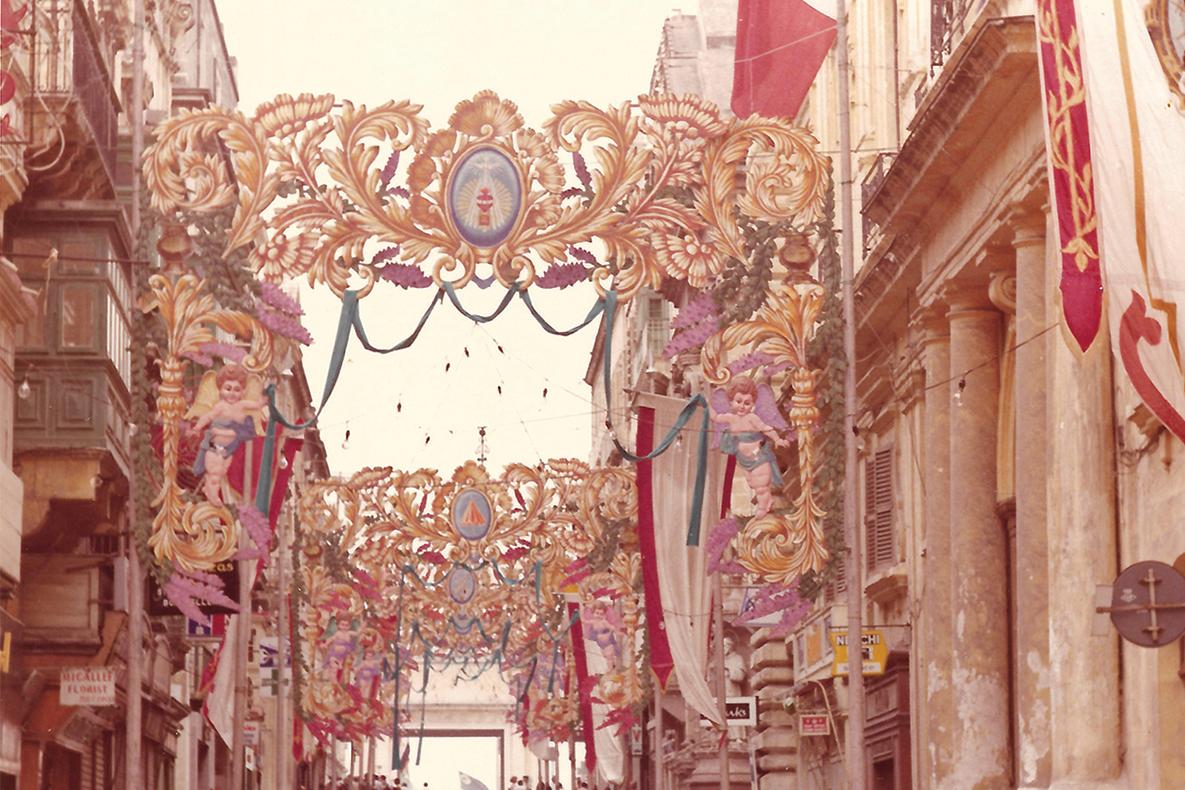