The two superpowers met on board a ship in stormy conditions in Malta on December 2, 1989. The rest is history.

By November, 1989 was already destined to become one of the most significant years in the annals of history. Communism was being shaken to the core as revolutions swept Eastern Europe.

On November 9, the Berlin Wall came tumbling down, and with it a succession of communist regimes. A largely bloodless upheaval in Poland was followed by Hungary opening its borders with the West. The government of Czechoslovakia also fell. Bulgaria and Romania followed.

As the leaders of the two superpowers prepared to meet for their summit in Malta, the fledgling East German government of only seven weeks was forced to resign.

The international scene was changing fast. Ronald Reagan had already paved the way by having several meetings with Mikhail Gorbachev and George Bush was keen to continue making progress.

Throughout his career, Mr Bush strongly believed in dialogue and in face-to-face encounters with the opposite party in solving problems. During his vice-presidency (1981-1989), he seized every opportunity to meet Soviet leaders, even for a short encounter.

On Thursday December 10, 1987, at the end of Mr Gorbachev's first visit to Washington, after bidding farewell to Ronald Reagan, the Soviet leader entered his limousine, where he was accompanied by Mr Bush on the way to Andrews Air Base to return home.

During the short journey, Mr Bush told Mr Gorbachev: "There is a good chance I'm going to win the presidential election next year. If I'm elected - and I think I will be - you should understand that I want to improve our relations."

As soon as Mr Bush took office on January 20, 1989, he started a full-scale review of US relations with the USSR. One of his top priorities was a personal meeting with the Soviet leader. Mr Bush was advised the best strategy would be to meet his Soviet counterpart in Washington in 1990, but the President wanted the meeting to take place earlier than that.

Several factors contributed to the final decision to hold the summit in Malta. The personal eagerness of Mr Bush to show all his trust in Mr Gorbachev and the urgent need to meet him face-to-face made both of them opt for a neutral place, distant from all protocol and far from the prying eyes of the media. Mr Bush even suggested somewhere like Camp David or some remote outpost in Alaska.

When the suggestion reached Mr Gorbachev, he expressed his readiness to such a meeting as long as it was held outside American territory, preferring a neutral spot.

In the meantime, it transpired that Mr Gorbachev was making a state visit to Italy in early December. The Soviets suggested a site somewhere in or near the Mediterranean. Subsequently, the Americans put forward Sicily but the Soviets disagreed as Italy was a member of NATO.

Later, both parties realised the potential danger of the Brigate Rosse terrorist group in Sicily. Cyprus was considered but owing to the simmering Greek and Turkish conflict, it was readily rejected.

Discussions dragged on for months without any conclusion. In late September 1989, President Bush met his younger brother William, nicknamed Bucky, who had just returned from Malta, representing the president at the 25th anniversary of Malta's Independence celebrations.

William Bush was aware of the Maltese government's attempts to promote Malta both from the tourist and industrial point of view. During a conversation, George Bush confided in his brother the idea of meeting Mr Gorbachev somewhere around the Mediterranean.

William Bush suggested Malta, pointing out that the island was a member of the non-aligned movement and half-way between east and west, north and south and very close to Italy, where Mr Gorbachev would be on a state visit.

The suggestion fitted exactly what the American President was looking for. When Malta was suggested to the Soviets, Mr Bush also proposed that the meeting be held on Soviet and US ships. 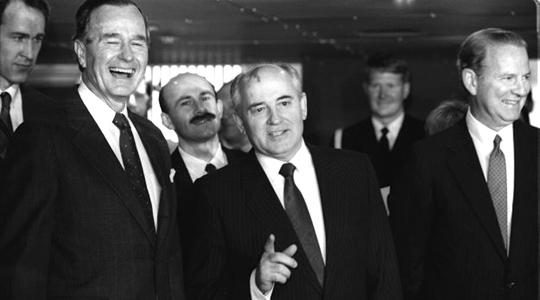 US President George H. Bush (left), his Soviet counterpart Mikhail Gorbachev and US Secretary of State George Baker during the summit. Photo: DOI

This proposal was welcomed by the US Secret Service. It would be easier to protect the President during a shipboard encounter than a meeting on land. As soon as the venue was agreed upon, the date was fixed for the following December 2 and 3. As the handful of negotiators had never been to Malta, all possible data was collected and dossiers about the island were compiled.

Idea to meet in the Mediterranean was symbolic

The idea to meet in the Mediterranean with no boundary lines was symbolic more than anything. On February 2, 1945, as the war in Europe drew to a close, Malta was the venue for an equally significant meeting between US President Franklin Roosevelt and British Prime Minister Winston Churchill, prior to their Yalta meeting with Joseph Stalin.

The Malta Summit of 1989 signalled a reversal of many of the decisions taken at the 1945 Yalta Conference.

After the summit, during a news conference, both leaders pledged to work for peace and unity.

Mr Gorbachev said: “The world is leaving one epoch and entering another. We are at the beginning of a long road to a lasting, peaceful era. The threat of force, mistrust, psychological and ideological struggle should all be things of the past... I assured the president of the US that I will never start a hot war against the US.”

The US president replied: “We can realise a lasting peace and transform the East-West relationship to one of enduring cooperation. That is the future that chairman Gorbachev and I began right here in Malta.”

For several political critics these statements were a clear declaration of an end to the Cold War.

Neutrality issue brought up ahead of summit

He said he had spoken to then Opposition leader Karmenu Mifsud Bonnici and told him that the possibility of the summit was an opportunity for Malta.

Dr Mifsud Bonnici intially said he agreed, but soon after started making statements that this could prejudice Malta, particularly in terms of neutrality, because it meant that military vessels would have to enter the island's waters. He insisted they had to assure Malta there were no nuclear arms on board and this led to rumours about demonstrations being held when the summit took place.

As a result, Mr Bush's National Security Adviser, Brent Scowcroft, called Dr Fenech Adami and said the president was reluctant to pay a courtesy call on him because there would be hostile demonstations. The Maltese prime minister assured him there would not be any demonstrations at any place where the two presidents would be.

"We managed to fix everything apart from the weather, though I was saying before we knew the end result that the storm was a very good omen for the talks."