Almost 40 years to date today, political thugs stormed into Times of Malta’s offices in Valletta, torching the building to the ground in what was the darkest chapter against the freedom of the press in Malta. 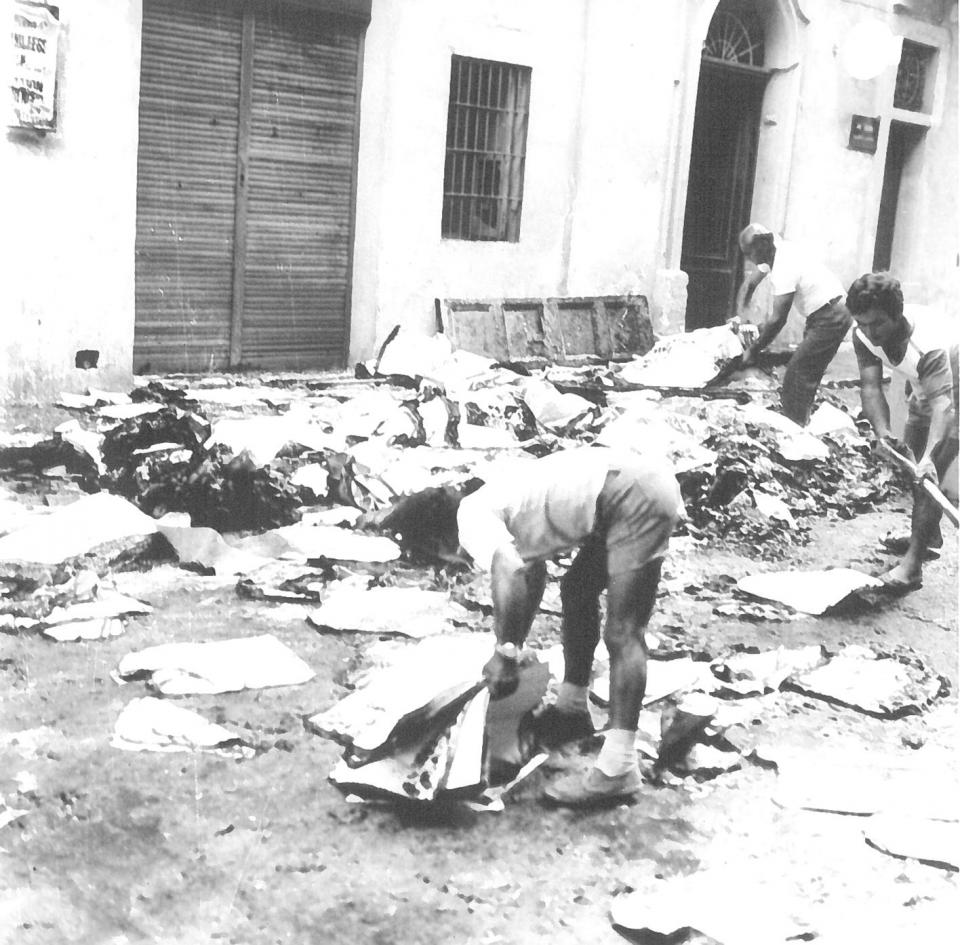 Workers clearing up the debris after the Times of Malta building in St Paul Street, Valletta was ransacked and burned to the ground in October 1979.

But the fire that characterised what became known as Black Monday was re-sparked just two years ago when journalist Daphne Caruana Galizia was murdered after a bomb was detonated in her car.

Mid-October has now become synonymous with the two most brutal attacks against the media in Malta.

“Press freedom can never be taken for granted,” says Victor Aquilina, a former editor at Times of Malta, who has written a book titled Black Monday, A Night of Mob Violence.

“I did not write this book to open any social wounds. It’s part of history. It’s a reminder of what political extremism can lead to. This was a build-up. It was not an isolated case… I thought it was time, after 40 years, to put it into book form for posterity,” says Mr Aquilina.

The free press continues to be a beacon to uncover corruption, sleaze, abuse, nepotism and clientelism

The book, published by Kite Group and dedicated to the memory of Ms Caruana Galizia, provides first-hand accounts of Black Monday and chronicles other attacks during the same night that included the ransacking of the home of the then Nationalist Party leader Eddie Fenech Adami. 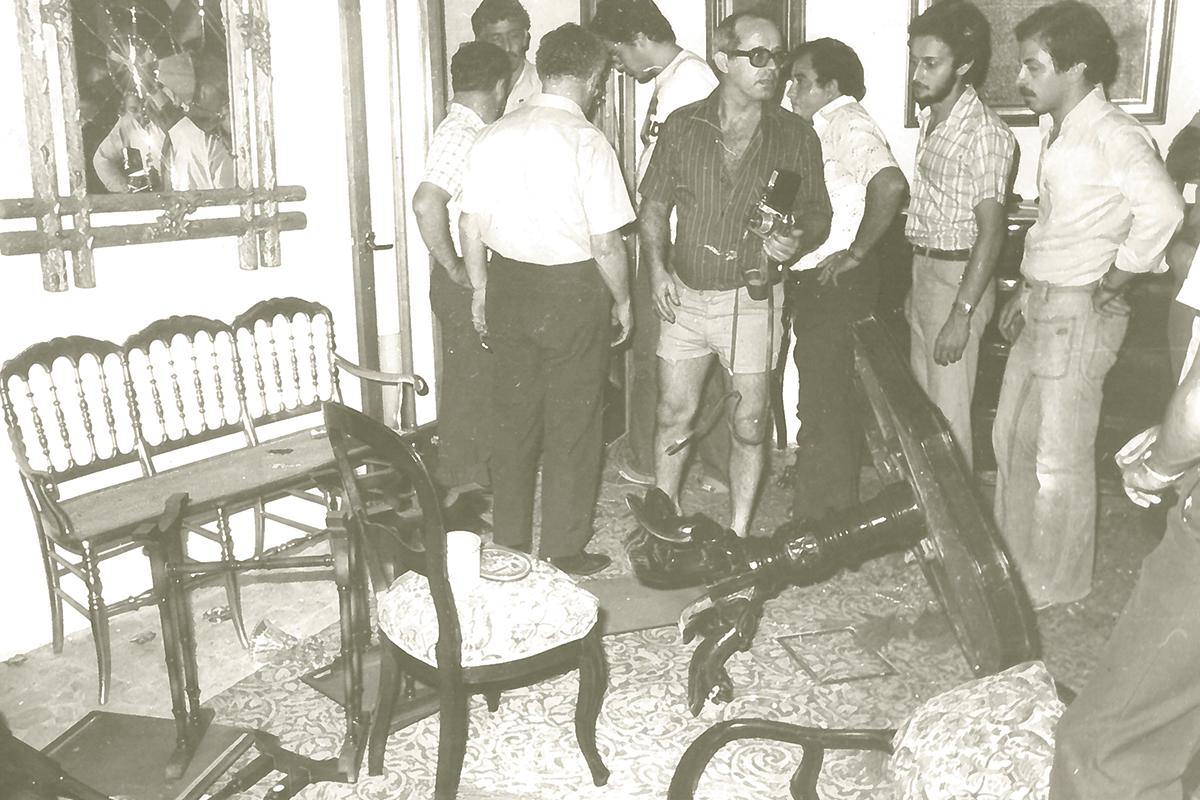 The home of then Nationalist Party leader Eddie Fenech Adami, second left, back to camera, was also ransacked on Black Monday. 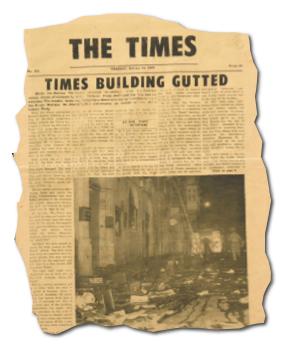 The first edition of The Times, which came out after the building was torched, is on display in the newsroom.

It also gives the background of the troubled relationship between Times of Malta and the Labour Party, and goes into some length into the shooting at Auberge de Castille on the morning of October 15, 1979 – when Karmnu Grima who went to speak to Dom Mintoff over personal matters, was accused of trying to murder the Prime Minister and two members of staff.

The shooting incident was blamed as the source of the violence by Labour thugs who gathered in Valletta to mark the 30th anniversary of Mr Mintoff’s party.

In his book, Mr Aquilina talks about factual threats directed towards Times of Malta by Mr Mintoff’s government and quotes Mr Grima’s son saying he believes his father was the victim of a frame-up. 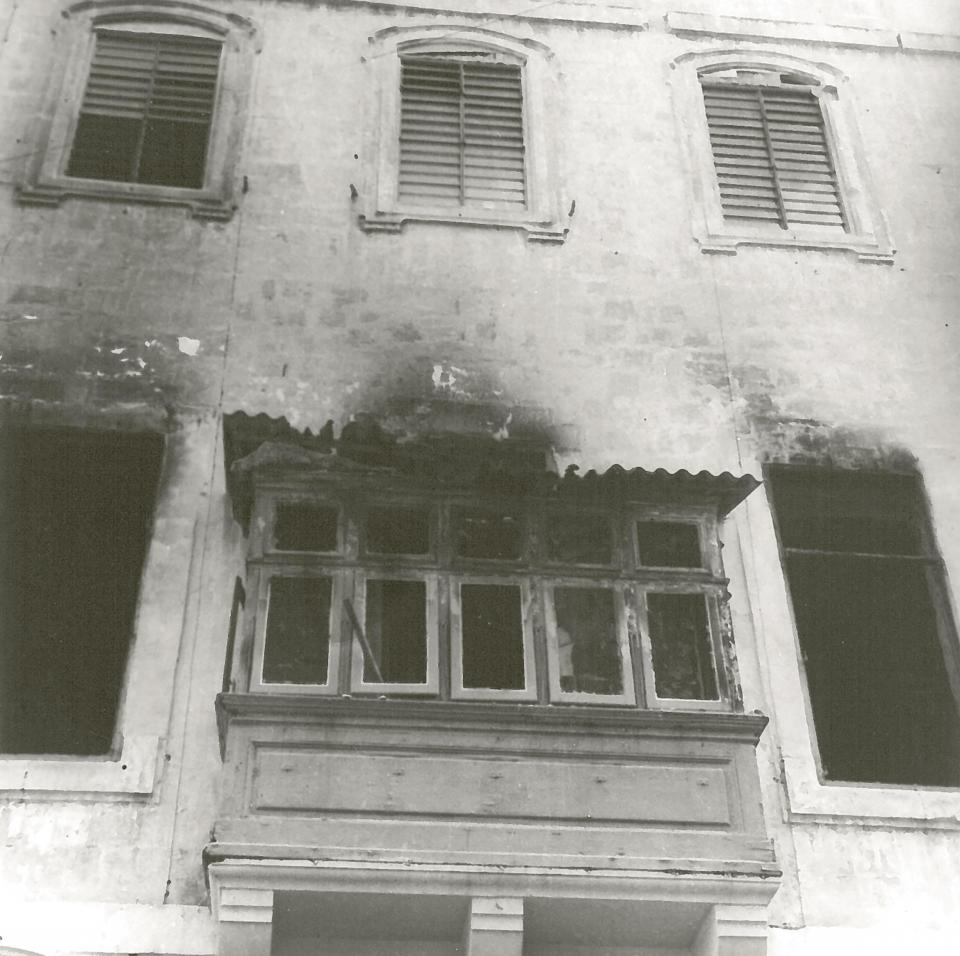 The building in St Paul’s Street was devastated.

One of the reporters, Michael Testa, believed this was a premeditated attack since one of his reliable police sources had told him to stay away from the building.

Burnt… but not silenced

As he shares his personal experience, Mr Aquilina recounts how back then he was assistant editor and was in a meeting in a room overlooking St Paul Street when he suddenly heard a commotion.

He looked out of the window and saw a group of people running in a raging fury towards the main door, screaming “Issa għat-Times” (Let’s go for The Times). Carrying objects in their hands, they forced the door open and in no time the building was on fire. 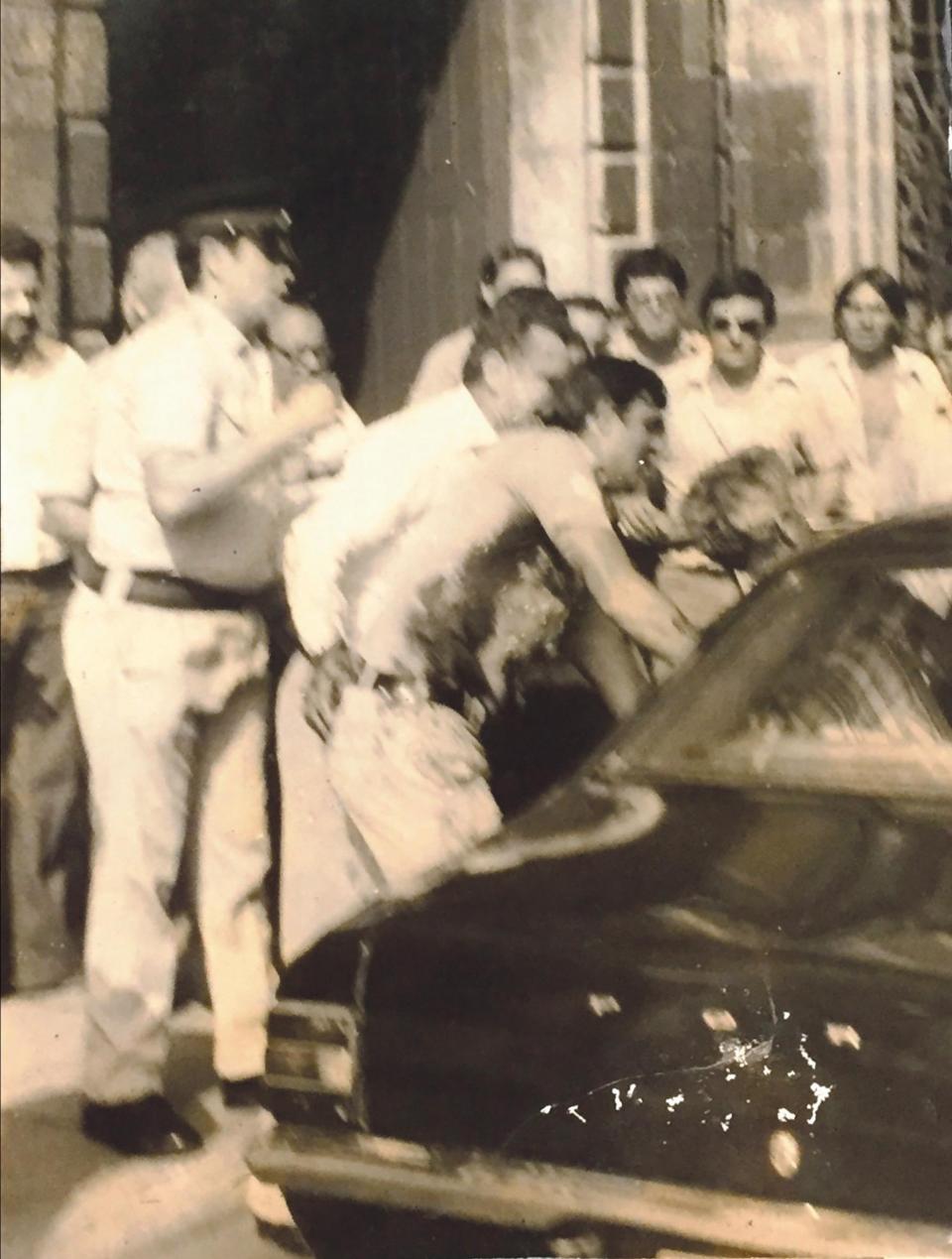 After the shooting at Castille, Karmnu Grima was led out of the side entrance, bundled into a car and rushed to hospital.

Mr Aquilina feared for his life but he somehow managed to escape through the front door, among the burning debris, while others climbed down fire-engine ladders at the back of the building in St Ursula Street.

Everything, from documents to photographs going back to the 1920s, went up in flames. Meanwhile TVM, the state broadcaster, reported the raging blaze to be “a small fire”.

But the truth emerged anyway.

The Times had been burnt but it had not been silenced. All the staff members pulled together and worked the entire night and the newspaper, printed an Independence Print, was on the streets the following day, telling the shameful true story of the night before. 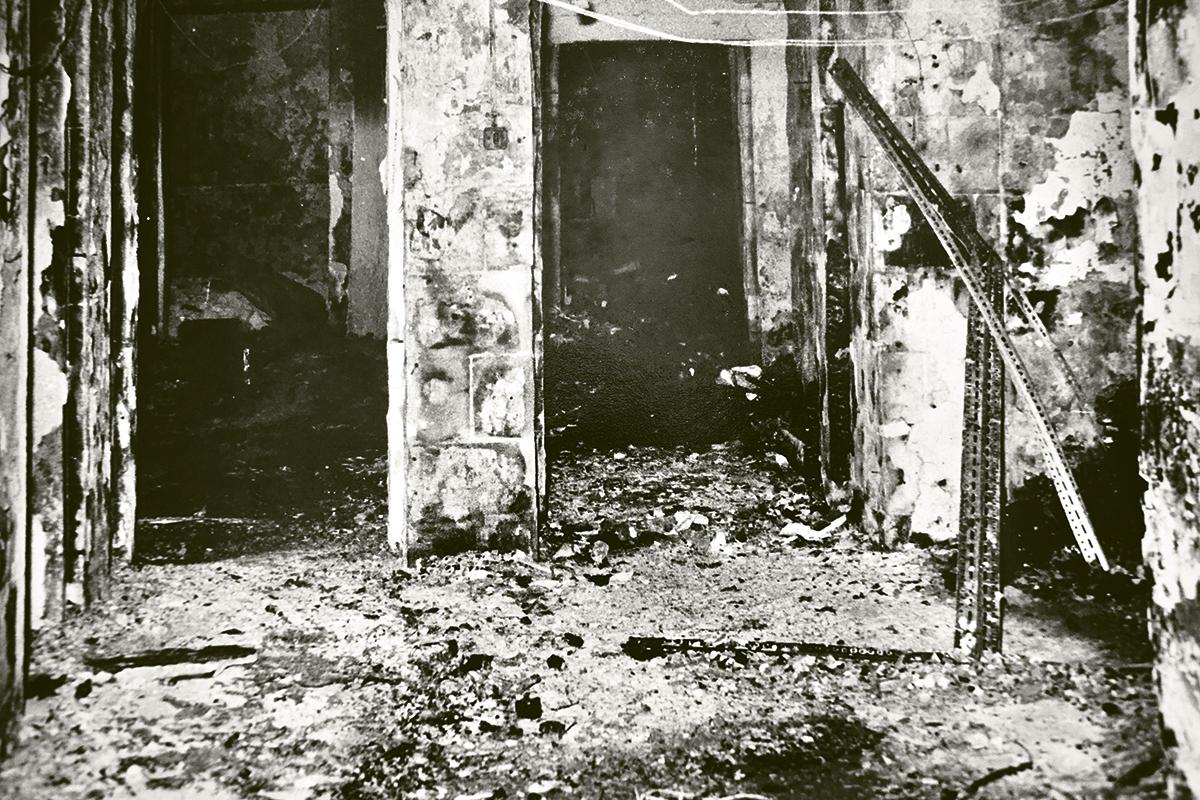 Truth. At all costs

In the words of law and media professor Kevin Aquilina, who penned the book’s foreword, Black Monday is more than a story about political violence. It symbolises a breakdown of the high virtues of the rule of law, democracy and freedom of the press.

It is also about the failure of law and order – as no one was ever brought to justice. Seen from a positive perspective, it is a historical account of a determined press.

“The free press has withstood the test of time and continues to be a beacon to uncover corruption, maladministration, the squandering of government coffers, sleaze, abuse, nepotism and clientelism. All this unstinting effort comes at a cost, sometimes at such a huge cost as the destruction of private property, as evinced on Black Monday, and even loss of life, as happened 38 years later, with the brutal killing of investigative journalist and blogger Daphne Caruana Galizia,” Dr Aquilina writes.

A limited edition reprint of 500 copies of The Times dated October 15, 1979 are available when purchasing the book from www.kitegroup.com.mt or during the book launch on Tuesday at the National Library in Valletta at 6.30pm. 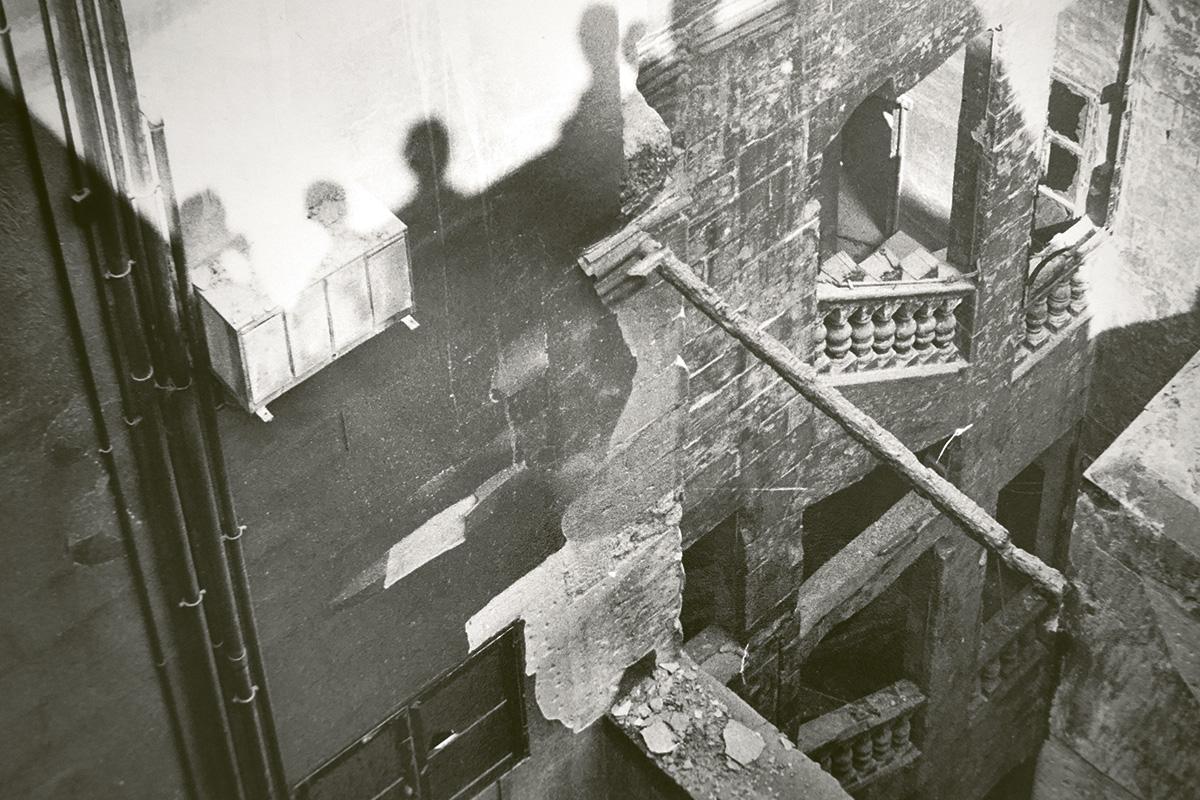