June 11, 1940 dawned, like any other Maltese early summer’s day, cloudless, calm and with a promise of warmth.

Dockyard workers were gathering outside the gates or in nearby coffee shops, waiting for 7am and the signal which heralded another day’s labour. Others were either on their way or preparing to leave for work. It was the normal pattern of the Maltese working life. 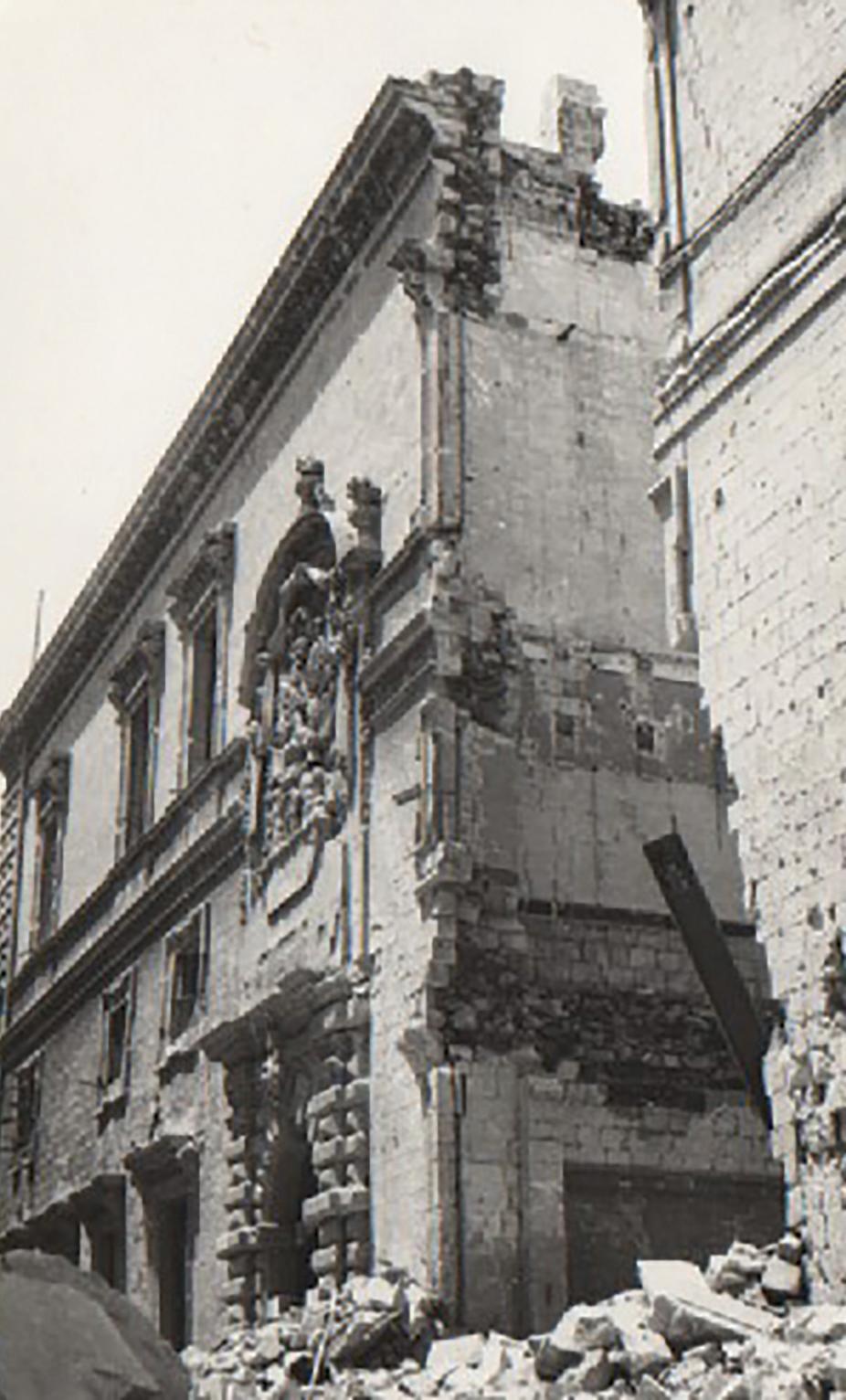 Half of the historic Auberge d’Italie in Merchants Street, Valletta, was demolished by bombing. It was rebuilt after the war and now serves as the arts museum.

But there was nothing normal about this day and much was to happen before it ended. The workers in the coffee shops or those still at home discussed one topic – the previous evening’s address by Benito Mussolini, dictator of Fascist Italy, declaring war on Britain and France, which had already been fighting Hitler’s Nazi Germany for 284 days, since September 3, 1939.

The war was going badly for the Allies, particularly as France, hitherto regarded as one of the great powers, was on the verge of collapse before the German military might.

But to Malta and the Maltese, war had seemed far away. Poland, where the war started, and France, were remote places.

Mussolini’s not unexpected entry into the war on the side of Germany suddenly changed all that. Malta, a mere 80km away from Sicily, suddenly found itself a front line and very isolated outpost of the British empire. And with the destruction caused by German and Italian aircraft in the Spanish civil war fresh in every Maltese mind, it was no wonder that many Maltese had spent a restless night.

Then the sirens wailed, at 10 minutes to seven. It was not another exercise, as some thought. It was very much the real thing. The first Italian bombers were heading for Malta, a country the Italians knew well, against a people whom Fascist propaganda up to a few days before regarded as blood brothers. A people among whom were several who in the bitter political disputes of the 1930s openly proclaimed their admiration of Mussolini.

The mournful wail which announced the first air raids caused panic, particularly in places close to the dockyard, like the Three Cities, Valletta and military sites. Nobody knew what to do, where to go.

Despite the horrors of Warsaw and Rotterdam, razed to the ground by the fury of Luftwaffe bombing, the authorities still thought that the biggest danger was gas warfare, perhaps because of its use by the Italians during the Abyssinian war a few years previously. 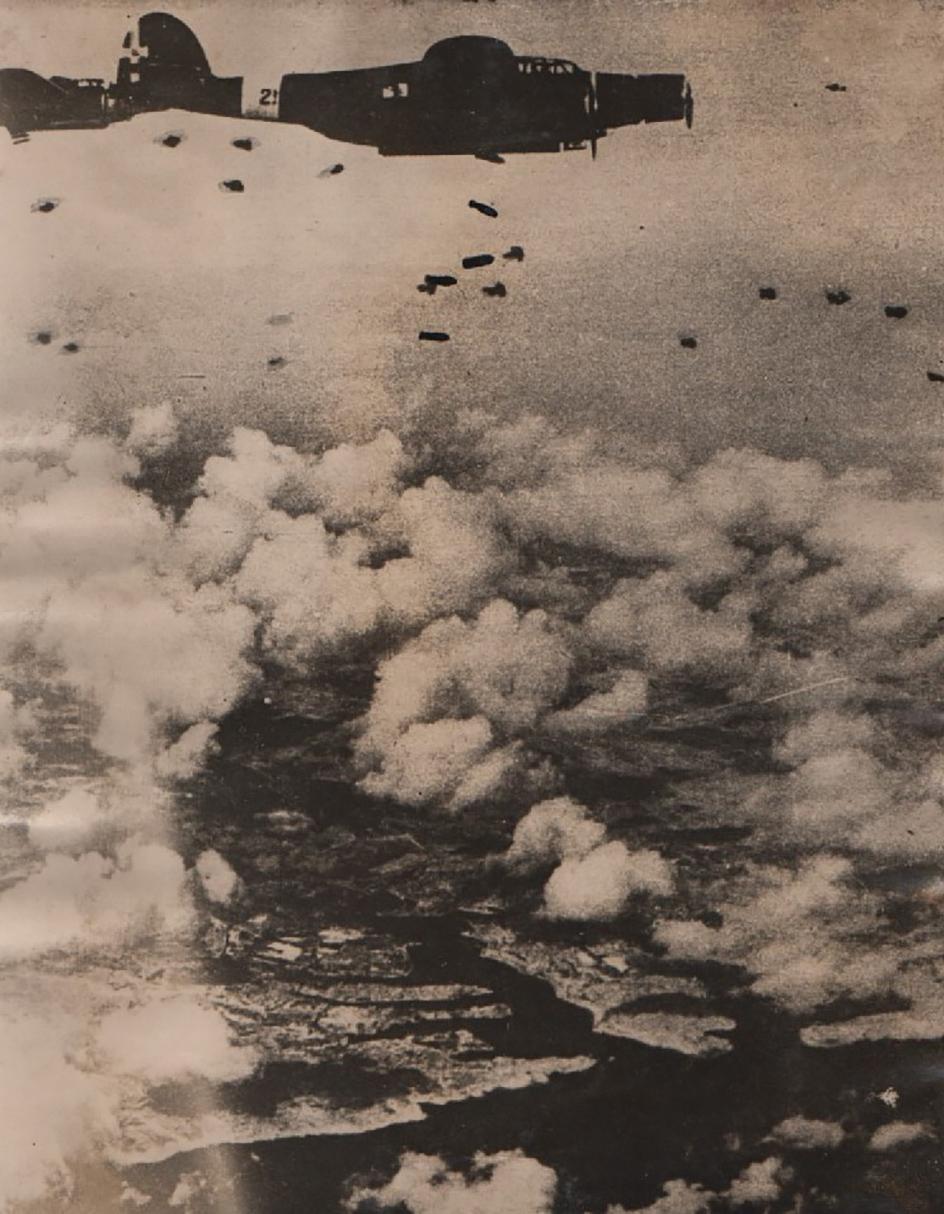 Malta was thus pretty well prepared for a gas attack – the people were issued with gas masks. A blackout was introduced in May and a corps of men, the Air Raid Precautions, was set up.

But nothing was done in the way of air raid shelters.

Few knew of the possible effect of high explosive on Maltese buildings. The best and safest places, the people were told, were under staircases or under tables! There were no other places to go, so everybody stood where he or she was at the time.

Everything came to a standstill in places which had air-raid sirens or where people who had a Rediffusion set (cable radio) had heard the announcer break in with a droll “Air-raid warning, Twissijja ta’ ħbit mill-ajru”. 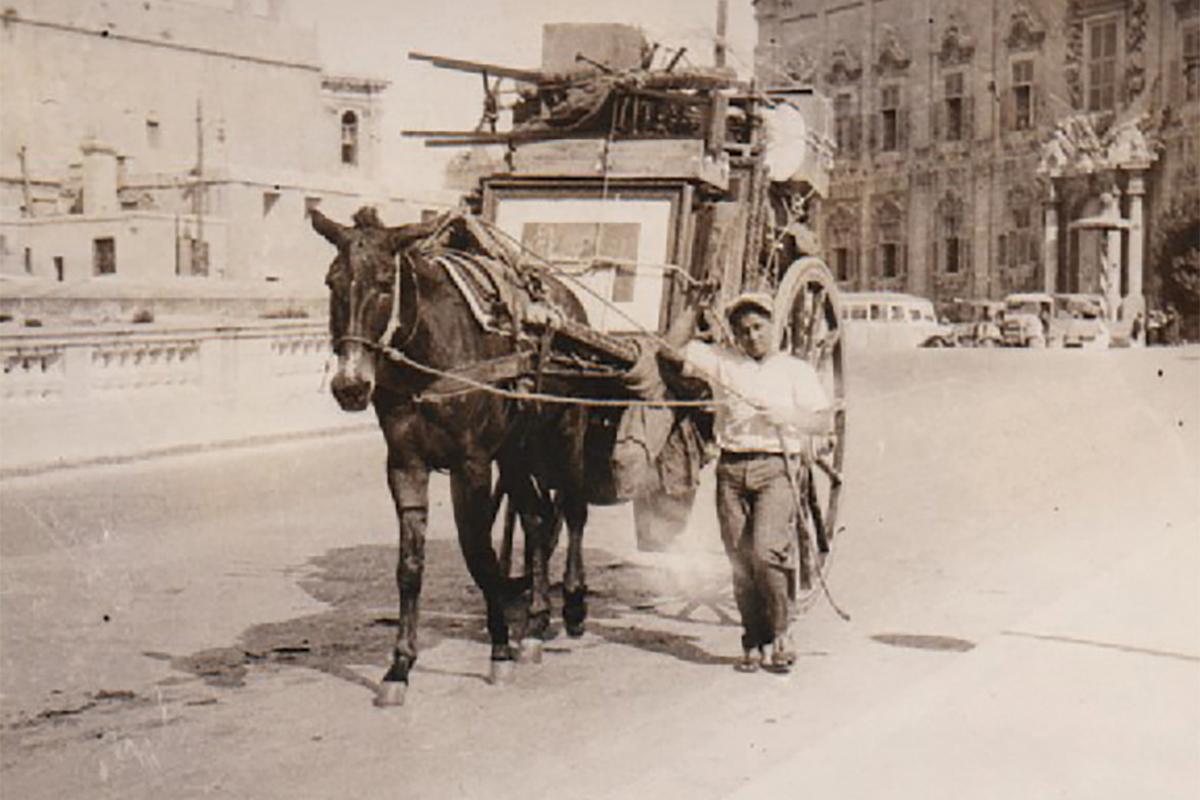 A refugee leaves Valletta with everything he can carry on his horse and cart.

The Italian bombers had a clear run towards Malta over the short stretch of sea from Sicily. There was little to oppose them when they arrived over Malta.

The island’s sole air defence consisted of a few outdated Gloster Gladiator biplanes, later to earn renown as Faith, Hope and Charity. These planes, flown by pilots who had never flown fighter aircraft before, were scrambled but could offer very little resistance. There is no record that they intercepted the first raids.

As for guns, Malta had very few. The British chiefs of staff – except for the navy – believed that the Italians would immediately attempt to capture Malta. They felt that Malta was indefensible and, although at one time they had agreed on an establishment of 112 anti-aircraft guns for the defence of Malta, few of these had arrived.

There was a good coast defence and these guns were supported by the 15-inch weapons of the monitor Terror which was moored in Sliema.

The only modern equipment in Malta’s defence system was radar. Malta was, in fact, the first place outside Britain itself to have a radar set, giving it precious early warning of incoming air raids.

Wise people who saw the war clouds gather and rightly guessed that Italy would not be on Britain’s side sought to lease houses in the villages, away from the target areas.

Malta was the first place outside Britain itself to have a radar set, giving it precious early warning of incoming air raids

Villages like Żebbuġ, Dingli, Birkirkara, Naxxar, Għargħur, Siġġiewi and others were to see an influx of townspeople, almost complete strangers to them.

In those days there was still a very distinct difference between life in the villages and the towns and this invariably led to some friction. 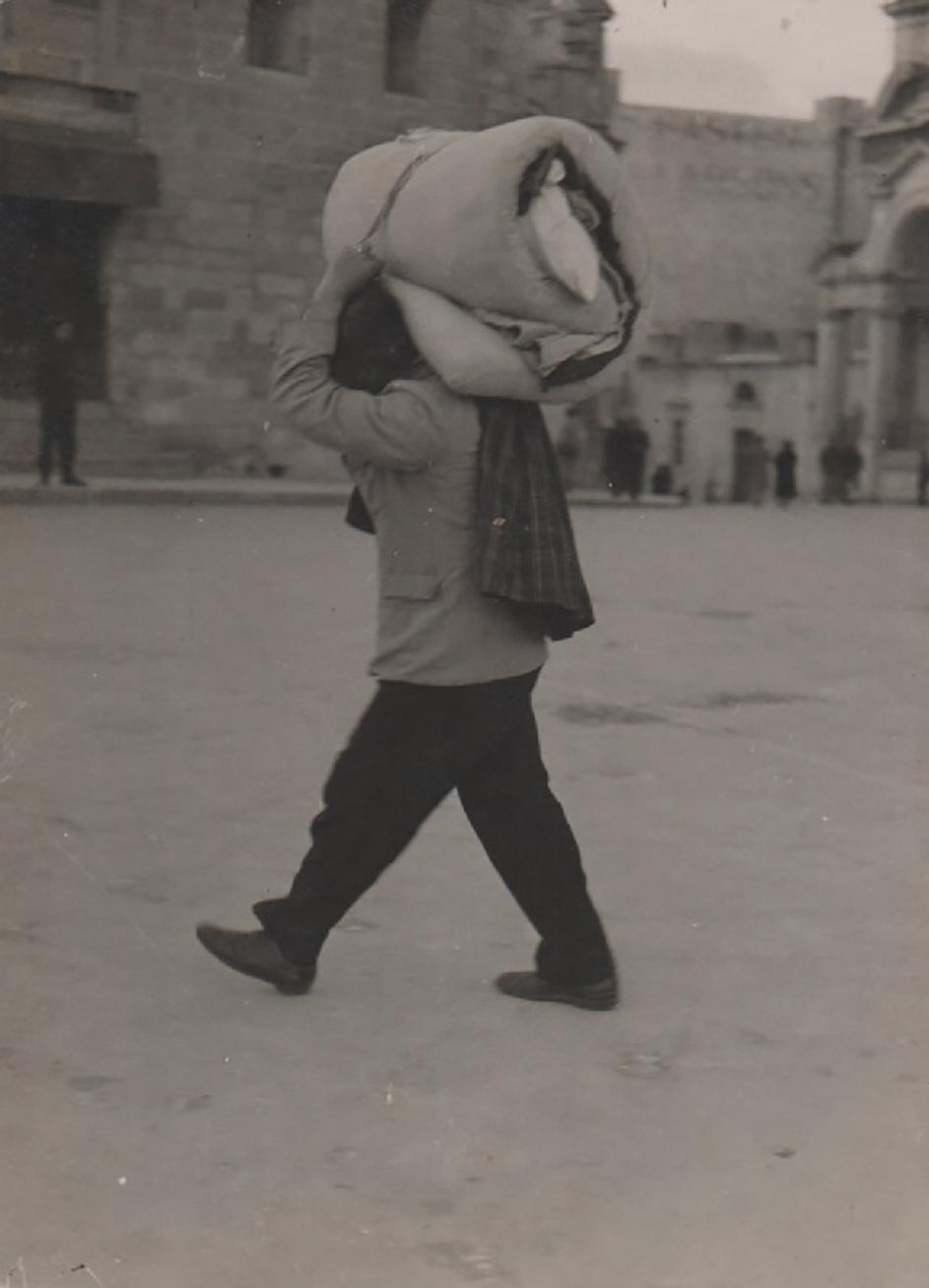 A refugee carrying his bedding as he leaves Valletta.

One woman, on trying to rent a small house in one of the remoter villages, was nearly lynched when she asked whether the place had a bathroom – a scarce commodity in those days even in towns.

There were also many funny episodes when villagers and their guests found they could not understand each other very well, even though both were speaking Maltese. But necessity and time settled everything.

Children among the first casualties

The Italian Air Force came in two formations in those early morning raids. The first dropped bombs on Ħal Far airfield and between Fort Bengħajsa and Birżebbuġa.

A second raid followed immediately and bombs were dropped at Corradino, Floriana, Sa Maison and on St Luke’s Hospital. One of the bombs fell between Portes des Bombes and the Water Works establishment, plump in the middle of the road that leads to Msida.

A more daring raider made a low pass over Fort St Elmo and one of the bombs killed six soldiers of the Royal Malta Artillery. They were firing at the aircraft with their rifles – they had no anti-aircraft guns. One of the dead was 16-year-old boy-soldier Philip Busuttil.

There were seven bombing raids that day. Pieta, Guardamangia, Msida, Gżira, Marsa, Żabbar, Tarxien and Sliema were also hit. Eleven civilians were killed, including a 25-year-old mother and two of her children, aged five and four. A three-year-old girl was killed in Pietà. In a little-known case of ‘friendly-fire’, a number of Maltese were also killed when their service launch was shot at by a coastal defence gun crew near Birżebbuġa who feared an enemy landing. 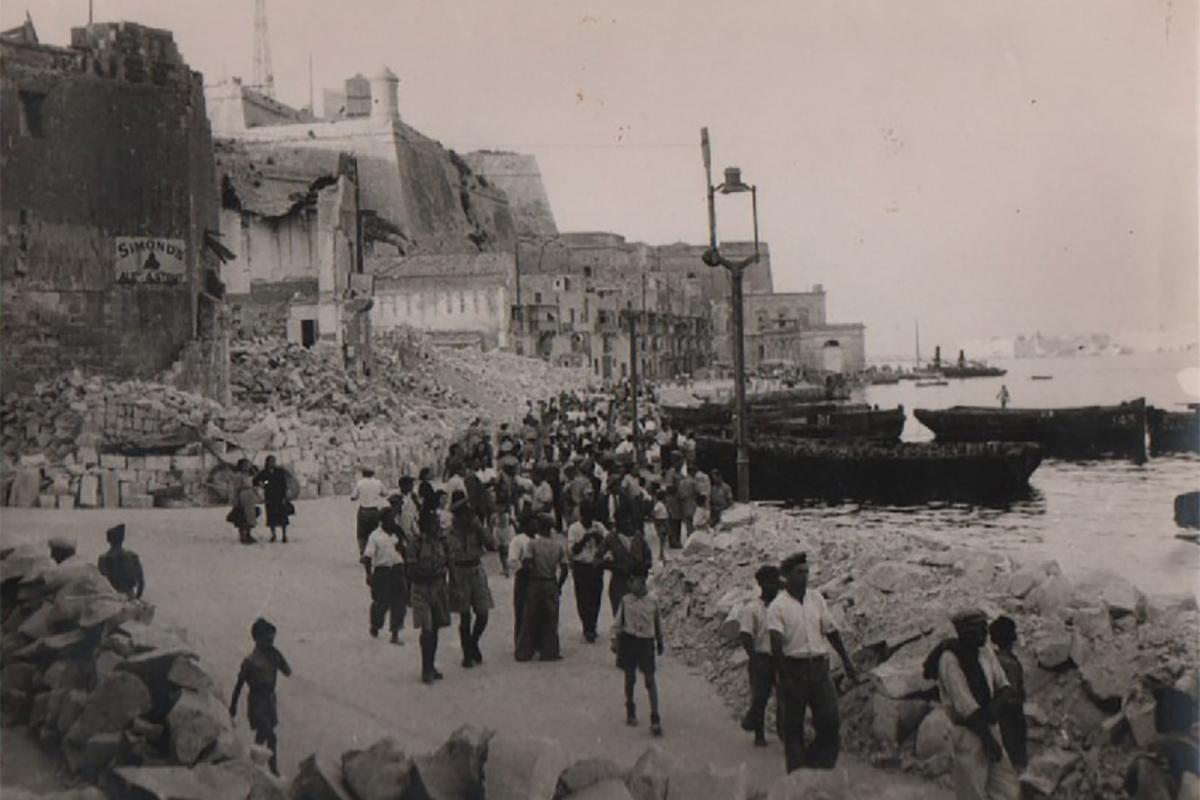 Ruins at the Valletta waterfront.

An exodus from the harbour area

Fortunately, there was a lull between the first raids and the next, and the people, having got over the initial shock, could think of nothing but to move out from Cottonera and Valletta.

The refugees left in every conceivable form of transport, mainly buses and karozzini, for there were no taxis and very few cars then. Hundreds walked. Many horse-drawn carts were loaded with mattresses and as many household articles as could be carried, plus the family.

Many reached their destinations hours later, for, on the way they had to stop for real or imaginary air raids and sought shelter wherever they could. All was confusion, all was very strange.

Over the following days some 80,000 people (some accounts say as many as 100,000) left the harbour area for the outlying towns and villages. It was a social shift which would continue to be felt for generations as many of the refugees eventually settled permanently in their new homes, and Valletta and Cottonera were depopulated. (It bears remembering that Valletta’s population before the war was a staggering 23,000, and 13,000 packed Cospicua).

Many moved in with friends or relatives, but complete strangers also generously opened their homes. Refugees also moved into schools, band clubs, convents and some churches – there were 400 in Birkirkara primary school. Żebbuġ school was similarly packed.

The Lieutenant Governor, Sir Edward Jackson, visited the refugees and recounted:   “I shall never forget the profound impression that was then made upon me by the almost boundless charity which the poorer classes then displayed in taking their friends, and even strangers, into their homes, destroying altogether the privacy of their lives, and still more so, when in quite a small room, as many as 20 or 30 people were accommodated, not only sleeping but living and eating there as well, and all under conditions of cheerfulness, friendliness and tolerance and give-and-take. I myself would not have imagined that that was possible, either in this country, or any other country.” 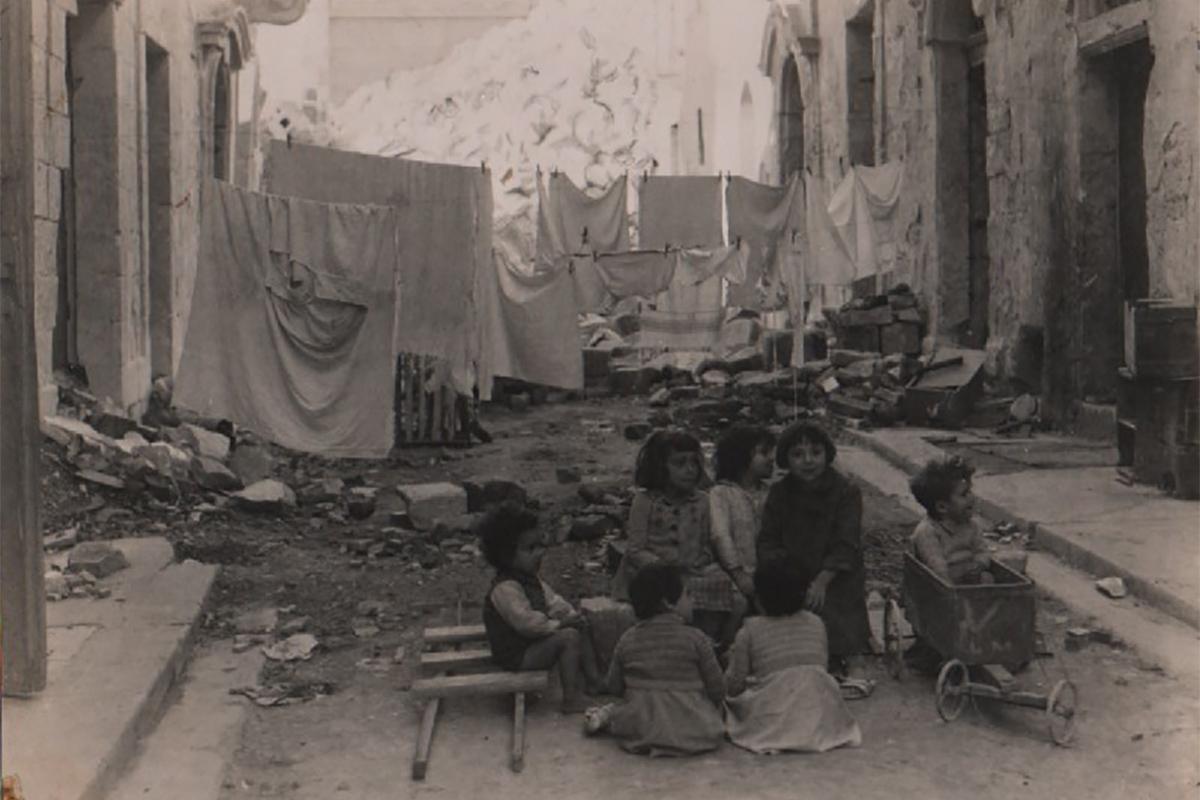 Malta’s children laughing and playing amid the ruins.

Those people of Valletta and Floriana who had nowhere else to go made a beeline for the old, disused railway tunnel which started from City Gate (beneath the site of the current parliament building) and ran under the Mall Gardens in Floriana and out near Portes des Bombes. They were to remain there for a long time, many for as long as three years until the siege ended. In Cottonera, hundreds lived in squalor in tunnels dug by the knights. Many also moved to church crypts. The dead had to make way for the living.

It was the first taste of communal living. Thousands lived in difficult conditions, lacking fresh air and sanitation. In time, when disease was rife, it was a hotbed for scabies. But it was safe, or virtually so, with lots of rock on top. And safety mattered.

Prelude to three years of siege

In terms of what was to come later, the damage was slight on the first day of the war. Such was the prelude to three years of dire siege.

In the following days, the Italians continued to fly regular sorties over Malta, flying so high outside the range of anti-aircraft guns, as to be barely seen.

In time, the Maltese got used to them – they even derided them – and life began to return to something approaching normality.

Quite a number of people started drifting back to the cities.

But worse, must worse, was to come. In time, the Italian Air Force was replaced by the German Luftwaffe who knew their business better and who, at times, made little distinction as to what was a military target and what was not. Hundreds of houses were demolished – especially in Senglea – and the cities witnessed another exodus.

In all, before the siege was lifted in 1943 by the collapse and eventual surrender of Italy, the enemy made 3,300 air raids on Malta, dropped an estimated 16,600 tons of bombs. They killed 1,579 civilians and badly injured 1,800. Malta was the most heavily-bombed area per square mile in the world at the time.

J.P. Scicluna was a former assistant editor of Times of Malta and vividly remembered the start of the war as a boy of 12 living in Floriana and later as a refugee in Żebbuġ and in an air-raid shelter beneath the Floriana bastions. He passed away in 2003. The above article was adapted by Christopher Scicluna.