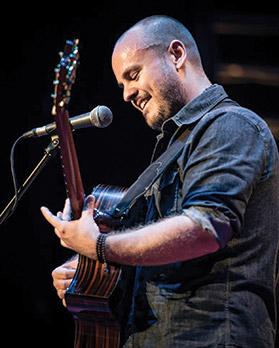 For all that it has going for it, sun, sea, sand, history, beauty, Malta is not the best of places to be for a music fan, particularly a fan of music played live.

Before the pitchforks come out and the bonfires lit, hear me out. Yes, there are plenty of live music events almost every weekend, especially in the warmer months.

There is the Isle of MTV, there’s an endless parade of cover bands of varying quality visiting our shores, we have plenty of active local bands and a number of live music focused events.

However, the dearth of suitable venues and what seems to be a general lack of appreciation of original live music, as opposed to DJ sets and parrot acts, pains my heart and that of many others.

So, it’s not uncommon for us diehards to venture overseas to catch a really good gig. Good gigs can be had here, sure, truly top class ones, less commonly so. Can we agree on that?

So, when I heard that acoustic guitar virtuoso Andy McKee is playing in our very own capital I was sold hook, line and sinker right away and had tickets booked that instant.

Like countless others, many millions of them actually, judging by the play counts, I discovered McKee from YouTube perhaps seven years ago, specifically through his cover version of Toto’s Africa, played instrumentally and using a set of mind-blowing techniques on an acoustic guitar.

I became a fan right away and have since listened to a number of McKee’s albums and watched many hours of his videos. And now, he’d be playing right here.

Organiser Frankie Calleja of TAO Promotions knew what he was doing when he chose City Theatre as a venue.

It works equally well for seated or standing affairs and can take a goodly number of punters in the crowd. And a goodly number there was, all waiting on tenterhooks for the man himself.

The sound was exceptional as well, a truly welcome change from common experience, though in fairness, this is a less complex sound than others, so there’s that to consider.

McKee’s demeanour and all round humility, even when on stage truly cuts through, until it’s time to dazzle on guitar again

Warming up the crowd were Justin Galea of so many bands and talents one can’t even mention, and singer songwriter Claire Tonna. It was my first time hearing any of her material, though I’d heard the name mentioned before.

I’m a fan now. Tonna is what I would call ‘a beautiful soul’, even if the phrase makes me cringe. Her songs are well-written, her voice of unique timbre, her guitar-playing effective and not overly-complicated. But, what matters is that the songs have real heart and soul behind them.

Of course, it truly helps that she has an incredible personality and the crowd warmed to her in an instant. Galea’s accompaniment on keyboards and backing vocals was exceptional and the man has a range in his voice I find hard to believe, and that’s a compliment by the way.

Truly a great duo, and they warmed the crowd up something other, particularly when gig organiser Frankie Calleja joined them on stage.

Next up was the piece de resistance. I’m really not too sure what I say here in that a musician such as McKee can only be truly appreciated when heard or preferably watched.

Mere words in ink can’t really do any justice, try as I might, but here’s my attempt anyway.

McKee does not just ‘play’ the guitar; he plays, caresses, cajoles, hits, plucks and generally manipulates the instrument in unbelievable ways and using incredible technique.

As a result, the soundscape generated by his playing is unlike what we commonly expect of the humble six-string acoustic guitar and truly something to search for online and enjoy for hours on end.

In my observation, the audience hovered between two states during McKee’s set, which was just the right length and punctuated with a brief intermission.

They were either enraptured in the music and McKee’s incredible playing prowess, or else applauding till their hands were raw between songs.

To say that the audience was enthusiastic is a bit of an understatement really. The total silence during songs and the fact that everyone had eyes front and neck craned to watch is enough evidence.

Playing a well-picked set of songs off his albums, two or three of his most popular instrumental cover versions and an encore, McKee was truly at home in front of his audience, the mark of a true professional. The standing ovation at the end was truly well deserved.

Of course, the little jokes and self-deprecating humour while introducing songs have been uttered countless times before on countless stages, but McKee’s demeanour and all round humility, even when on stage truly cuts through, until it’s time to dazzle on guitar again.

The man may well be a long away from home in Kansas, the US, but he’s still fully in his element because, in the end, all that matters is tightly wound steel and wood, and technique. A true masterclass to be remembered.