Chen Cheng first hit the headlines in Malta in May 2016 when he was outed by journalist Daphne Caruana Galizia as the owner of a secret offshore company in the British Virgin Islands.

Little was known about Chen at the time, despite his involvement in Enemalta projects running into the hundreds of millions. 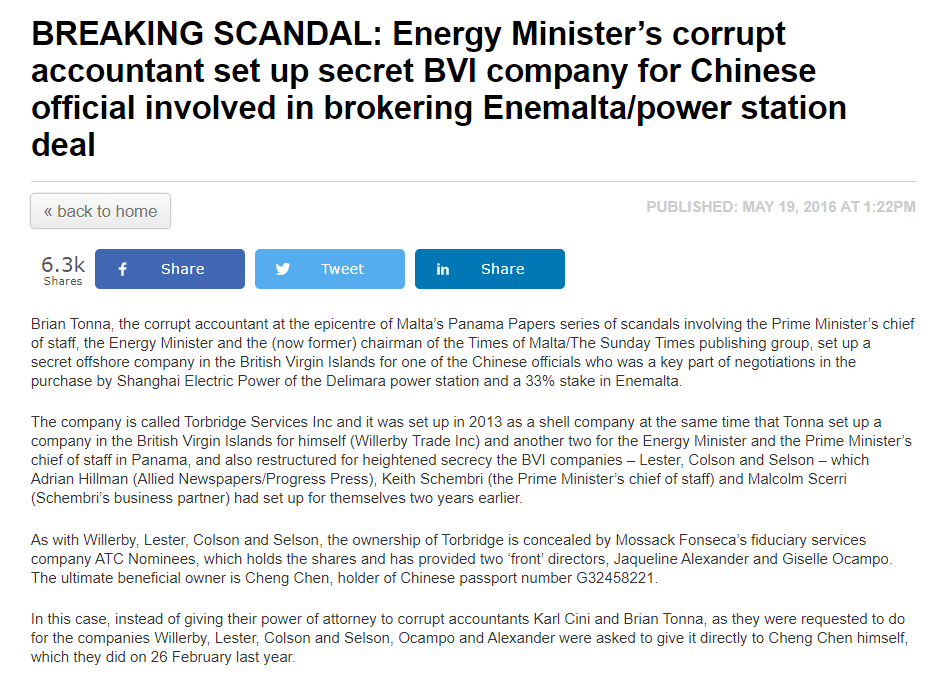 Times of Malta and other reporting partners revealed on Monday how his mother-in-law, Tang Zhaomin, owns the mystery company Macbridge.

The Panama Papers leak, in which Chen features as the owner of another company called Torbridge, sparked an investigation by the Financial Intelligence Analysis Unit into all the energy projects touched by former minister Konrad Mizzi.

Investigators traced an account opened for Chen by Nexia BT at Pilatus bank. The account would receive €1 million by the end of 2015, Nexia BT told Pilatus, although no transactions were ever carried out.

In the background, Chen had been busy negotiating the €320 million part sale of Enemalta to the Chinese state-owned company Shanghai Electric Power.

He also played a crucial role in the Montenegro wind farm project, the fallout from which finally led the Labour Party to kick out Mizzi following revelations by Times of Malta and Reuters last year about how murder suspect Yorgen Fenech had secretly profited from the deal.

Moreover, the Chinese negotiator featured in plans for offshore Chinese investment deemed as suspicious by a forensic expert working on the famous Egrant inquiry.

E-mails uncovered by the inquiry show Chen’s interactions with government officials were not limited to just energy investments.

The correspondence detailed talks of a ‘Machin Project’, involving the setting up of a public-private partnership to be controlled via a holding company in the British Virgin Islands.

According to a synopsis of the e-mail found in the Egrant inquiry report, the meeting was to “finalise business model…energy related topics, real estate, tourism…meeting with Maltese experts to understand the potential as offshore investment hub for Chinese…”.

Mention in the e-mail was also made about the involvement of a “Sai” in this structure, which forensic experts flagged as a possible reference to Sai Mizzi, Konrad Mizzi’s wife.

Sai Mizzi’s was posted in Shanghai on a generous financial package, ostensibly to promote Chinese investment in Malta.

An emigration agency set up in China was also proposed in the e-mails.

“Through this model a value chain for Chinese Applicants has been created in order to be in a position to submit request for Maltese identity documents,” the correspondence reads.

Egrant magistrate Aaron Bugeja had recommended a police investigation into the “Machin project” as part of the Egrant inquiry conclusions that the government had withheld from publication.

Konrad Mizzi had claimed in a statement following the release of the full Egrant report that the Machin project was never pursued.

The leaked Nexia BT e-mail detailing plans for Mizzi’s and Schembri’s Panama companies to received up to €2 million from 17 Black and Macbridge also touched upon their plans in Asia.

“Tourism: target country – Asia” was listed as one of the avenues that could generated income for their hidden Panama structures.

Research of corporate records in China show both Chen Cheng and his mother-in-law Tang Zhaomin have links with Mao Haibin.

Mao is a senior official in charge Shanghai Overseas Chinese Exit-Entry Services,  the Chinese company given the exclusive concession by the Maltese government to sell residency visas in the Chinese, Hong Kong and Macao markets.

Corporate filings in China show Mao and Chen were partners in a company called Shanghai Visabao Network Technology, which operates in several major Chinese cities and helps Chinese citizens get their hands on visas for overseas travel.

Moreover, Chen’s mother-in-law, the woman who owns Macbridge on paper, is also a manager and shareholder at a Shanghai advertising agency controlled by Mao.

The company’s logo appeared on hoarding at an event to promote the sale of Malta residency visas in November 2017. 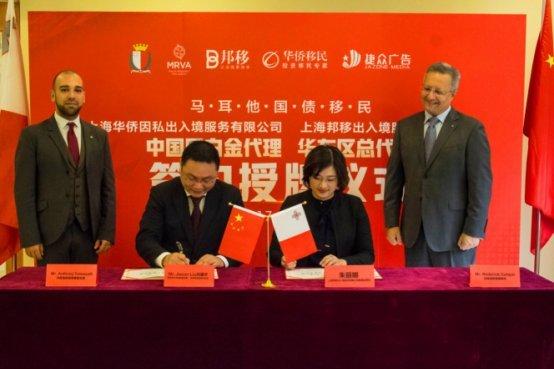 Mifsud Bonnici was appointed by Mizzi to Enemalta’s board at the time of the Shanghai Electric Power and Montenegro wind farm deals.

Contacted by Times of Malta, Mifsud Bonnici said he knew Mao in his capacity as CEO of Shanghai Overseas Exit-Entry Services, the Malta Residence and Visa Agency (MRVP)’s official concessionaire in China.

“Asiatica Corporate Services was registered in Malta, aiming to support the residence practice by providing MRVP applicants with local corporate services. However, no client was referred or serviced, hence it never operated and is now pending liquidation”, Mifsud Bonnici said.

On his links to Chen, Mifsud Bonnici said he knew him from his capacity as advisor to Shanghai Electric Power, and he met him some time into my tenure as Enemalta board secretary.

Mao has appeared at events promoting the Maltese visa program in China alongside Maltese officials including John Aquilina, Malta’s ambassador to China; Roderick Cutajar, the then CEO of the residency visa agency, and Aldo Cutajar the former consul general to Shanghai.

In 2019 Mao’s younger brother Mao Haichun co-founded two Maltese companies with Roderick Cutajar, one focused on property, and one on residency and citizenship by investment.

Cutajar told Times of Malta that his company immVest International has no links with Shanghai Overseas Exit-Entry Services, and neither does he have any links with Aldo Cutajar, Chen Cheng or Macbridge. There is no suggestion that Roderick Cutajar was involved in wrongdoing.

In August 2020, Aldo Cutajar was arrested by Maltese authorities and charged with money laundering, including making “illicit profits” suspected to have come from visa sales. Large sums of cash were found at his home, and a significant sum was also uncovered in a UAE bank account.