Science is a way of understanding ourselves, our surroundings and quenching our thirst for the unknown. A researcher is someone who asks and attempts to answer questions. Isn’t that the same as the rest of society? So, why do we need to communicate research findings?

These questions were explored during the last Public Communication in Science and Technology (PCST) conference that took place in Dunedin, New Zealand earlier this year. The main issue for this conference was how to engage citizens who are not involved in research with science. Various workshops presented the power of using creativity and emotions in engaging audiences during science shows. Emotions, such as the element of surprise or the use of comedy, have been shown to captivate audiences even when explaining otherwise mundane topics. Storytelling is another powerful tool since it translates complex relationships into fun, understandable tales. 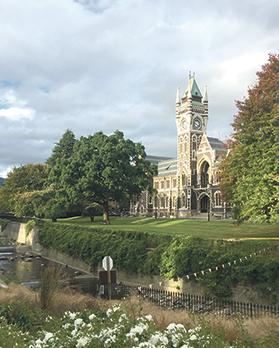 University of Otago in Dunedin, New Zealand, which hosted the conference.

Public engagement has multiple functions at different levels in today’s society; from policy, to research to personal interest, it is no wonder that science communication is given importance even by some of the most influential associations across the world.

The EU, for instance, has several funds such as the Horizon 2020 European Union Framework Programme for Research and Innovation, which prioritise policies such as tackling societal challenges through research. Science communication research should evaluate the impact of how these policies are implemented in a society.

Spaces for dialogue between various social groups, be they citizens, researchers and policy makers is needed, in order to move towards a new way of performing research that involves society at every step. This relationship needs to be reflected in how research is governed.

Science should not be limited to scientists. It is vital for science communication to bring forward findings to help citizens engage with research and in a sense, help them find the scientist within.

Danielle Martine Farrugia is a PhD student and science communicator at the Department of Physics, Faculty of Science,University of Malta. She hosts Radio Mocha Malta and runs Malta Café Scientifique.

• Grasshoppers have ears in their abdomens.

• It takes around one minute for a red blood cell to circuit around the body.

• Around 59 million years ago, penguins the size of a grown man lived on New Zealand.

• A number of images of the supermassive black hole, Sagittarius A*, were created using astrophysical models in order to create a 360o virtual reality simulation of the black hole. Scientists are hopeful that this simulation will help them understand how black holes behave.

• Scientists analysed surface soil samples from 11 European countries and found pesticide residues in 83 pr cent of the 317 samples collected. 58 per cent of that percentage contained more than one type of pesticide residue. One of the main chemicals found was DDT, a pesticide which was banned in the 1970s for being a likely human carcinogen. DDT is highly persistent in the environment.
https://www.sciencedaily.com/releases/2018/11/181126134257.htm

For more science news, listen to Radio Mocha on Radju Malta and www.fb.com/RadioMochaMalta/.