I hate it when we choose to be too politically correct while ignoring the bigger picture. I strongly believe in protecting the rights of asylum seekers but I don’t subscribe to the idea of calling all migrants entering Europe “refugees”.

Many of those knocking at Europe’s doors are entitled to refugee status or some form of protection. Others are not.

Semantics apart, however, if us journalists are to put an end to stereotypes and scapegoating the most vulnerable, then we have no choice but to choose our themes and words based on facts. The refugee crisis is the biggest since World War II and unless we arm ourselves with facts we risk feeding into a problem which could spiral out of control.

Hundreds of journalists are in Malta this week for the EU-Africa migration summit. And with that we should expect the template terms: “illegal”, “swarms”, “army”… without realising that we are penning a prelude to an invasion. 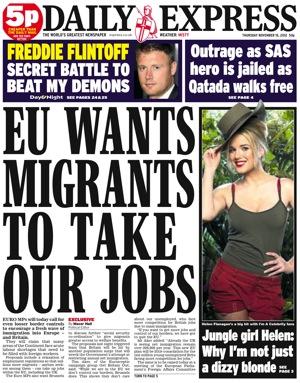 I am the first to admit the media has been largely responsible of fanning the flames of racism currently burning Europe. Yes, we are often merely quoting decision makers and the public when reporting the migrant crisis, but we do not realise we are often presenting stories laced with the threat of a lawless society.

We fail to grill the likes of Czech president Miloš Zeman and Hungarian Prime Minister Viktor Orban, leaders who are bent on building the walls they themselves tore down 25 years ago. We even give a voice to despicable people like Katie Hopkins and Norman Lowell because their outlandish statements sell.

I believe we should go beyond that. I fully subscribe to the European Federation of Journalists, which said reporters should dare to denounce and confront hate speech publicly. We have the responsibility to counter racist messages and prejudice with facts. We need to be the guardians of the powers and cannot just report passively.

Does this turn us into ‘activists’, that dreaded term most of us media people shun? There’s a very fine line, and a line I am willing to cross if it means sticking up for basic human rights.

For too long, we have joined politicians on the anti-immigrant rhetoric bandwagon without giving a voice to the protagonists of the problem. The stereotyping of migrants is now part of our daily discourse. We quote people who fear refugees because they take our jobs, threaten our ‘values’, rape our women...

We feel we have no choice but to portray them as spongers because after all we are really reflecting what the masses really think no? But in doing so we are simply giving a voice to the populists who have easy access to our microphones while we forget the migrants abandoned in the Saharan desert, on a rickety boat in the Mediterranean, the thousands stuck behind the fence to Eastern Europe because they speak a foreign language.

Does this turn us into ‘activists’, that dreaded term most of us media people shun? There’s a very fine line, and a line I am willing to cross if it means sticking up for basic human rights

Instead of tackling the deep-rooted structures of inequality we scapegoat the most marginalised because it is easy to do so. How many times have we seen migrants portrayed as spongers, black or Arab-looking, questioned by the police?

So what can we do?

We can start by refusing to use factually-incorrect terms such as “clandestine” if we start by understanding that people fleeing war and persecution actually have a right to pack up and leave… without taking their passports.

The public’s concerns have to be understood and brought to the fore but let’s remember they’re also shaped on what people read.

For all the years I’ve been reporting the migrant problem, we have been fascinated with the numbers game. The numbers are used by leaders because they automatically evoke an image of hordes waiting to invade, thus justifying the government’s response.

While the figures are certainly worrying, refugee movements currently account for just one per cent of the EU’s population. Lebanon, a small country with some 4.5 million inhabitants, now has 1.2 million Syrian refugees! News agencies are currently reporting with definitive headlines that the EU is expecting "another three million refugees and migrants in 2016". The European Commission forecast they refer to is not for 2016, but for 2015-2017 and the three million figure includes also those who have already entered the EU this year.

Does this mean we should ignore the potential threat of migrant movements? Of course not! Again, I don’t subscribe to the idea of allowing everybody in without the necessary checks. But it doesn’t mean us journalists shouldn’t question why armies are being deployed on borders thus giving the impression of an invasion of dangerous people.

How about redirecting our energies towards reporting some of the positive stories, the contribution that some of these migrants are making?

During the Valletta summit we will hear leaders underline the need to beef up border controls and repatriation procedures. As journalists we have a duty to ask how many thousands of refugees are being forced to take more treacherous routes because of the walls built by Eastern European countries. We have a duty to ask about African concerns that the summit risks turning into an EU monologue.

History should teach us something – the Church had to apologise for its inaction as the Nazis spread their tentacles around Europe. The least us journalists could do is to stop being accomplices to the scourge of hatred around us.