A woman who suffered a permanent debility when the bus she was seated in eight years ago crashed into Portes des Bombes has been awarded close to €18,000 in damages.

The 52-year old victim, who at the time of the accident was a senior care worker at the Education Department, was one of the unfortunate passengers on board an Arriva bus involved in the crash in October 2012. 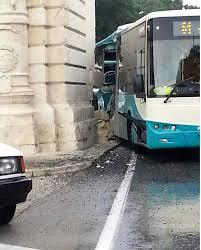 It was around 3pm when the bus driver, on the Valletta to Żebbuġ route, lost control of the vehicle which crashed into the side of Portes des Bombes, dislodging the stonework and causing a traffic pileup as two other buses collided, one of them crashing into the central strip.

Some 26 persons needed medical assistance as ambulances rushed to the scene of the crash, with a massive traffic jam resulting along St Anne Street.

Among those seriously injured was the applicant who, upon impact, was flung out of her seat, ending up unconscious and suffering various injuries to her hand, legs and face.

Mapfre Middlesea, as insurer of the bus company, assumed responsibility for the accident, while the other two respondents contested the claim.

When delivering judgment, the First Hall, Civil Court, presided over by Mr Justice Francesco Depasquale, observed that Allcare Insurance should not have been sued since it was an agent of the insurer.

However, MPT was responsible for the actions of the driver involved in the crash wherein the passenger was injured and had been legitimately sued.

When calculating the damages, the court based itself on various reports drawn up by medical experts who had examined the patient.

Those reports established an orthopaedic debility of five per cent, while aesthetic and ophthalmic damages amounted to six and four per cent respectively.

The parties agreed upon a “weighted average” debility of 10%.

While declaring MPT as also responsible for the accident and all consequent damages, the court ordered the insurer of the vehicle, Mapfre Middlesea, to pay the sum awarded to the applicant.