A moral dilemma posed in a 14-year-old secondary school student’s homework has left parents divided after pupils were asked whether they would kill a dictator as a baby in order to save the lives of millions of people.

The question, which was posted to a local Facebook group, has people divided on whether it was appropriate to assign the question to teenagers, while others argued that it was a very common moral dilemma to discuss in ethics classes.

Posing an ethical problem, the question asks students to imagine that they are left alone in a room with a baby they are told will grow up to become a dictator who will kill millions.

“You know you will not get caught if you kill this baby. What would you do and why?” students were asked.

In a follow-up question, students were asked if they would or could kill a baby, even if they know it would save millions. The teens were required to link their answers to ethical theories. 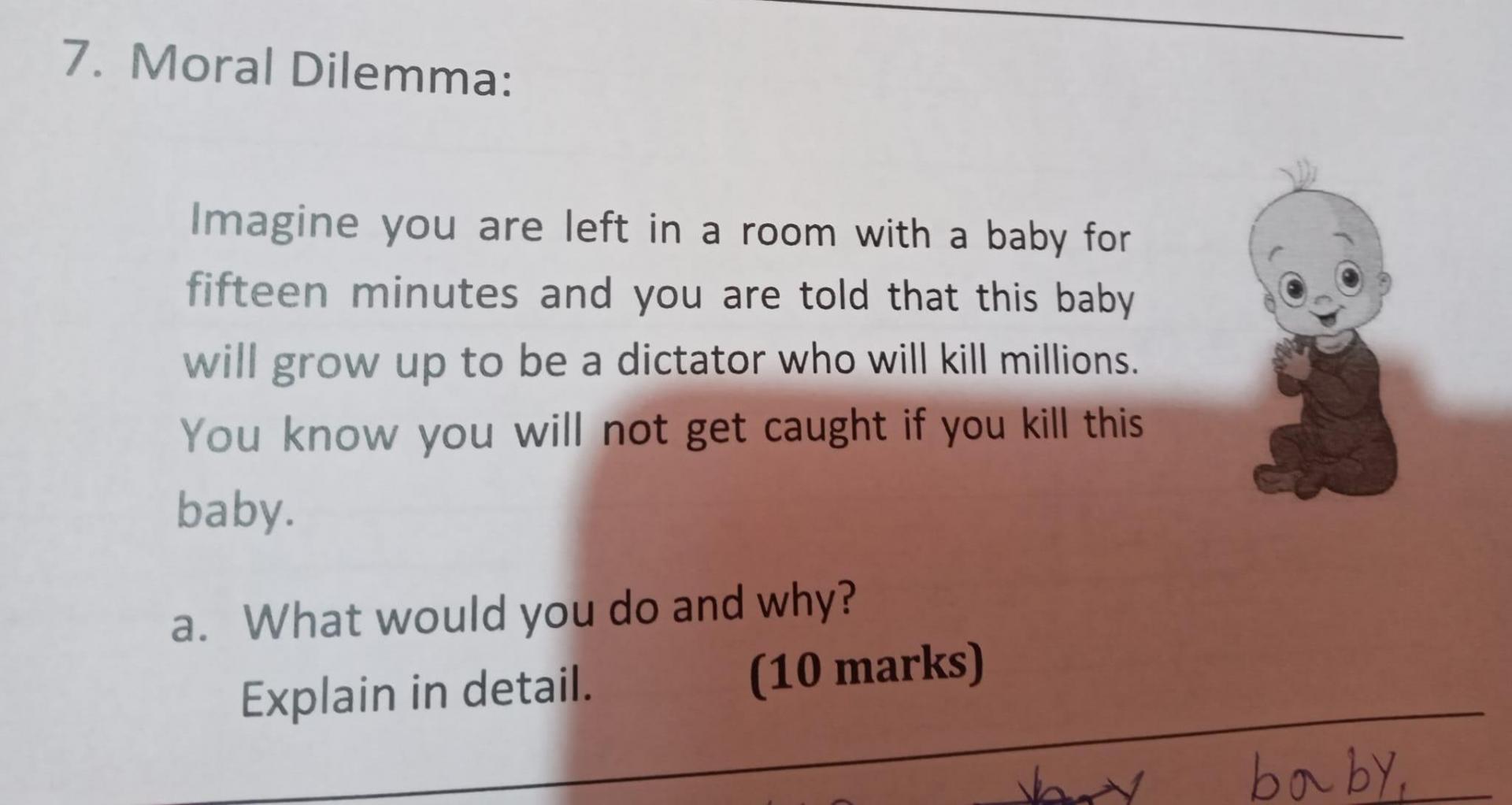 The moral conundrum is a variation of a thought experiment known as the ‘trolley problem’, which typically involves having to decide whether to sacrifice the life of one person in order to save the lives of a greater number of people.

The question is designed to get people to think about their ethical convictions and try to arrive at what is the right thing to do in a morally dubious scenario.

In 2015, the New York Times magazine even put the question to its readers, running a poll asking whether, given the ability to time travel, they would kill Hitler as a baby in order to prevent the Holocaust. The majority, 42 per cent, said that they would, while 30 per cent said no and 28 per cent said they weren’t sure.

Locally, the decades-old philosophy problem generated some controversy among people online, with some even describing it as “mental abuse” and “training material for sociopaths".

“This is wrong on so many levels,” a woman named Simone commented.

“What exactly does a child learn from this? I agree with critical thinking however not in this situation. Are we unable to approach this without questioning a child if they would kill a baby for the right reason?”

“It's sickening. I was never asked these questions in school and my critical thinking is just fine.”

Another commenter, Tena, agreed with this sentiment.

“There are more appropriate questions for a 14-year-old,” she said.

“For example ‘If someone cheated on a test and got away with it and you knew about it but it didn’t affect you, would you tell the teacher?’”.

“If you want to teach ethics, you can do it differently by leaving out killings and violence”.

However, other commenters were quick to point out that the moral dilemma is often discussed in schools and is meant to provoke students to weigh moral ideologies.

“This is a very common task set out in schools in which you are supposed to think critically about utilitarianism and deontology,” said Sara.

“It really has nothing to do with actually killing a baby.”

Dason added that the point of the question was not just to answer, but to apply their learning of ethical reasoning.

“There is no correct answer, but there are more and less informed justifications of a taking a stand on the issue,” he said.

“14-year-olds are learning to apply what they’ve learned rather than regurgitating facts, take a moral stand and be expected to justify it using accepted principles beyond ‘it’s just wrong’ and becoming aware that two conflicting viewpoints may be equally valid.”

“By pretending that there is a simple and correct answer to everything, we blind ourselves to understanding that most choices are rarely 100 per cent right or wrong.”

Others also pointed out that media consumed by teens, like video games and films, also explored such moral dilemmas. Superhero franchises like the Avengers and even softer shows like Sailor Moon have had sub-plots that involved characters debating whether to murder a villain as a baby, commenters said.