Yana Mintoff Bland, the former prime minister's daughter, said this morning that her family was speaking to lawyers about the film Dear Dom, currently being screened in cinemas.

Interviewed by Pierre Portelli on TVAM, Dr Mintoff Bland hit out at the production, saying it lacked respect for the former leader and painted him as violent and vindictive, when he was neither.

She also criticised the fact that the film had benefited from public funds (through the Film Fund).

Dr Mintoff Bland, who will be a PL candidate on the first district in the forthcoming general election, said that many people from Valletta and elsewhere had seen the film and many had walked out in disgust, viewing it as a waste of their money and of public funds.

The film, she said, was presented as a letter to her father. When one wrote a letter, one sent it to the person to whom it was addressed and expected a reply, she said. But that was not the case with this film.

Her father never had the chance to see this letter, despite being very up to date with what is going on.

Dr Mintoff Bland reiterated comments made in l-orizzont yesterday that she saw Nationalist involvement in the production.

Dr Francis Zammit Dimech, who was present for the interview, denied PN involvement and said the film was necessarily limited by time constraints but it sought to achieve a balance. In his view, he said, one would rather have had footage of the violence committed during Dom Mintoff's time instead of graphics as shown in the film.

Dr Mintoff Bland  said the opening of the film was interesting, making use of old footage, but after 30 minutes the viewers started realising that there were 'half truths' and a lack of respect for the progress which Mintoff's Labour government had brought about.

Dom Mintoff was shown as being partisan and interested only in his supporters. But didn't everyone benefit from the social benefits which he had introduced? Hadn't he eradicated poverty for everyone? Hadn't everyone benefited from the freedom he achieved for the country?

Dr Zammit Dimech said the format of a letter was an artistic form used frequently with regard to people in public life. He insisted that one should not expect to see only the positives in this day and age. Much had changed in broadcasting since Mintoff's time.

Dr Mintoff Bland insisted that was not what she had said, but her father deserved to be respected and a letter should be sent to whoever it was addressed. 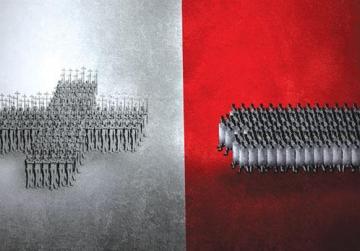 She regretted that the suldati ta l-azzar were painted through graphics almost as if they were Nazi or robots.

Dom Mintoff was painted as being violent and vindictive. Yet he was not violent or vindictive. Should somebody produce a film about the violence of the 1960s and the mortal sin episode?

Furthermore, how could one say that the Karin Grech murder was not political?

Her father, Dr Mintoff Bland said, gave his life to achieve progress in Malta and now this film had come out with attacks against him.

Dr Zammit Dimech said the strongest attacks against Mr Mintoff came from the Labour side, and he was also described as a traitor.

Dr Mintoff Bland said this case was shown in a very superficial manner.

Dr Zammit Dimech said he would not object to greater detail.

Dr Mintoff Bland also asked if there was government involvement in the decision to also show this film in Helsinki, as announced yesterday.

In a brief interjection by telephone, director-producer Pierre Ellul said he respected Mr Mintoff and the film was based on the experiences of people who used to live in those times.

He said he had invited the Mintoff daughters to view the film.

Dr Mintoff Bland said they had chased Mr Ellul and not the other way around, and when she phoned him to get a copy to show her father, there was no reply.

When questioned, Dr Mintoff Bland said Dom Mintoff, now 95, is doing well. He had a good breakfast this morning and went out into the garden. She said he is keeping up to date and is full of courage.