The Yes camp has won the spring hunting referendum by 2,200 votes or 50.4 per cent of the valid votes cast.

The result was swung in favour of the Yes due to a strong showing in favour of hunters in Gozo. In fact, if Gozo was excluded, the No camp obtained 3,316 votes more than the Yes. 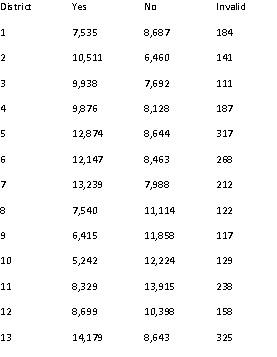 The full results can be seen on the table.

The No camp, which had campaigned to abolish spring hunting, conceded defeat and thanked all those who supported it. No campaigners said they would respect the decision and would continue to work for the protection of the environment.

"We did not win anything, we just did not lose," he said.

General secretary Lino Farrugia told hunters "let’s enjoy ourselves but let’s also be careful and respect everyone. We will announce an official activity at a later stage."

But hunters immediately started celebrating. Carcades were seen in several localities, and celebratory shooting was held in San Gwann, Zabbar and Mellieha.

Mr Farrugia addressed hunters in Qormi this afternoon asking them to respect others in their celebrations. He also thanked the people for their vote.

In a statement, the FKNK thanked the people "for  a historic result" to a referendum aimed at eliminating hunting in spring.

It appealed and directed members to celebrate within the law and not to antagonise anyone, especially those who could not have agreed with the Yes campaign, and to respect all the people.

"This referendum puts a bigger burden on us so all members should behave in an exemplary manner to continue to show the people how serious we are."

The Yes camp was buoyed late yesterday by figures which showed a higher turnout in localities known to have a high proportion of hunters.

Getting people out to vote had been key to the two camps and the hunters appeared to have been more successful, capping a successful campaign which they waged largely on their own terms.

The campaign – led by a group headed by lawyer Kathleen Grima rather than the FKNK hunters’ federation - was characterised by an absence of images of shotguns and dead birds, with the Yes camp having successfully steered it to one focused on the right to exercise their hobby.

The Yes camp made full use of the ‘pulling power’ of the prime minister – with most hunters said to be Labour leaning. Dr Muscat, like the leader of the Opposition, said that he would vote in favour of spring hunting, while leaving the members of the party free to vote as they wished.

The hunters also appear to have made inroads in their efforts to persuade enthusiasts of other hobbies, such as fireworks and motorsports, that a No camp victory could open the way for a referendum against their activities.

A Yes victory means that the Spring hunting season opens as scheduled next week.