In a report on the rule of law in Malta, Mr Omtzigt said that former police commissioner John Rizzo had been preparing to file corruption charges against Mr Dalli.

He wrote that days after Labour won the 2013 election, Mr Dalli returned to Malta, having previously been too ill to travel, and the Prime Minister immediately dismissed Mr Rizzo as commissioner and appointed Mr Dalli a public health consultant. 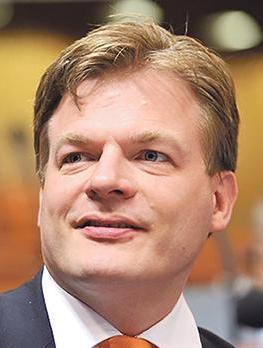 Mr Dalli is a former minister and European Commissioner who quit Brussels under a cloud of corruption allegations. He has consistently denied the claims.

Mr Omtzigt was appointed by the Council of Europe's parliamentary assembly to prepare a report on the rule of law in Malta. That report was published earlier this year.

Mr Omtzigt's statements did not sit well with Mr Dalli, who on Saturday accused the Dutch politician of being "shallow and irresponsible", for having repeated information fed to him by megalomaniac hate mongers",

“In your rule of law standard, what relevance do you give to the presumption of innocence,” Mr Dalli asked.

The fact that Mr Rizzo was preparing charges against him did not prove guilt, he argued, saying that police evidence was circumstantial and would not have led to a conviction.

Mr Dalli said that before returning to Malta he informed the police when he was due to return. When he did, Mr Rizzo was still Commissioner and had he wanted to proceed with the action against him, he had all the time to do so.

His work as a health consultant had been "pro-bono", he added.

Mr Dalli said he suspected the allegations came from “one of the top megalomaniac hate mongers in Malta” who sat in the Parliamentary Assembly of the Council of Europe, and who gave away public property to private entrepreneurs for a pittance.

Read Mr Dalli’s letter in full in the pdf below.